By chogministries
Posted October 8, 2014
In All Church of God
Move Aside, Hollywood! CHOG Takes Action on Trafficking2014-10-082014-10-08https://www.jesusisthesubject.org/wp-content/uploads/2016/07/ChogLogo-Light.svgChurch of God Ministrieshttps://www.jesusisthesubject.org/wp-content/uploads/2016/07/ChogLogo-Light.svg200px200px 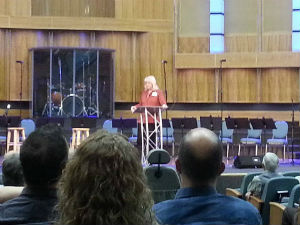 Photo: Carla Sunberg addresses Indiana Church of God ministers at Church at the Crossing in Indianapolis.

“I’m tired of Hollywood celebrities being the spokespersons for these issues. Where are all the Christians?” The words of Carla Sunberg, president of Nazarene Theological Seminary, echoed through the expanse of Church at the Crossing in Indianapolis. Ministers of the Church of God in Indiana came together for their annual meeting as they do each year in early October. But this year’s meeting took on a markedly different tone. Instead of offering leadership training or the latest tools for ministry, Indiana Ministries devoted the entire day to the subject of sex trafficking and gender-based violence.

Referencing a sermon delivered by a prominent preacher in the fourth century, Sunberg reminded Indiana ministers that “talking about justice and mercy has always been at the forefront of Christianity.” She insisted that the message of holiness included social concern from its earliest days. John Wesley, pioneer of the Wesleyan-Holiness tradition in which the Church of God finds itself, proclaimed a message of holiness that implied walking alongside the poor and marginalized. Citing the longstanding Wesleyan-Holiness support of women in ministry, she said, “We are stewards of the best theology of women in the world. What are we doing with it?”

Sunberg’s experience as a missionary in Russia initially opened her eyes to the evils of the sex trade and what she calls “gender-based violence.” After witnessing a “human meat market”—girls standing out of place in public along the roadside, waiting for buses to haul them off—she knew something had to be done. The righteous anger welled up inside her when she learned that the police force on site was not there to protect the girls, but to protect the lucrative industry. Like the prophet Jeremiah, who grieved in his heart for the grotesque fate of the young women in his city (Lam 3:51), Sunberg could hardly process the evil of what was taking place. Additional missions experience in Africa ultimately positioned her to lead the effort in the Wesleyan Holiness Consortium to begin an anti-gender based violence initiative—now called the Freedom Network. 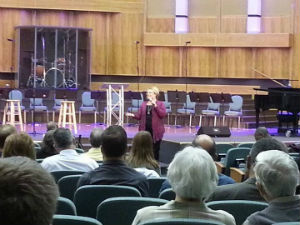 The Indiana meeting continued with stories from the front lines with Kimberly Majeski, of Stripped Love, a ministry the reaches out to young women in strip clubs. Jim Lyon concluded the day by illustrating the inextricable connection between inward transformation and social holiness. Drawing from John 10, Lyon underscored the truth that, like Jesus, Christians must earn the right to speak by good works. When Jesus was asked who he really was, he pointed to the works he had done. In the Luke 7 account of the messengers of John the Baptist asking about his true identity, Jesus replied, “Go back and report to John what you have seen and heard: The blind receive sight, the lame walk, those who have leprosy are cleansed, the deaf hear, the dead are raised, and the good news is proclaimed to the poor” (Luke 7:22 NIV). Addressing the ministers, Lyon said, “When we’re asked, ‘Who are you, Church of God?’, we should be able to respond, ‘We’ve already told you who we are—by the works that we do.’”

Move aside, Hollywood celebrities. The Church of God in Indiana and around the world is now taking action to fight human trafficking.

Find out how you can make a difference in the fight against sex trafficking. Visit www.CHOGTraffickLight.org to learn more.