By chogministries
Posted June 12, 2017
In All Church of God, Global Strategy
Missionary Couples’ Adventures Begin Before Botswana2017-06-122017-06-12https://www.jesusisthesubject.org/wp-content/uploads/2016/07/ChogLogo-Light.svgChurch of God Ministrieshttps://www.jesusisthesubject.org/wp-content/uploads/2016/07/ChogLogo-Light.svg200px200px

It wasn’t a message in the sky that led both Abby and Corey Stocksdale and Joy and Tim Coppess to understand that they were being called to overseas missions in Maun, Botswana. Slowly, however, and ever-so-gently, the Lord revealed his divine plans to each couple, and subsequently surrounded them with a community that lifted them up and championed them in pursuit of their calls.

For the Coppesses, it was a transformation in their prayer lives that led them to the mission field. “We shifted from praying a list of requests to listening more as we dialogued with God,” they reflected.

In early 2015, the couple began to ask God to break their hearts for what broke his and to give them eyes to see the suffering of the world. In an answer to this petition, both Joy and Tim began having dreams and visions that were indicative of a call to overseas missions. Ultimately, they trusted these signs and took a vision trip to Botswana in August 2016 to confirm and refine the Lord’s nudging on their hearts.

The Stocksdales encountered a similarly gradual call; for Corey dating all the way back to his experience at IYC in Orlando as a sixteen-year-old. While he thought that his ministry would mostly involve working with youth, he felt God leading him in a new direction about a year ago, and began digging deeper in his understanding of it. “What became the new unwavering peace was that God desired us to be in a cross-cultural setting,” he said.

Corey consulted his wife Abby before pursuing the idea any further, concerned that she might be hesitant to move out of the country with their three young children. As soon as he asked her, though, Abby excitedly confirmed her desire to go, having been herself inspired by the wise words of Marilyn Laszlo—a missionary in Papa New Guinea—six years prior while serving as an IYC chaperone in Orlando. “Seeing that God had unified us on this calling gave us the courage to take those initial steps of faith toward becoming missionaries,” she said.

As both families have begun to take the next steps toward becoming credentialed missionaries, they’ve been simultaneously championed by their local church communities. University Park Church in Johnstown, Pennsylvania, is a smaller congregation of approximately fifty members, but has nonetheless vowed to partner with the Coppesses both financially and in prayer. Joy and Tim have long served as a ministry team at University Park—Joy as a leader in the women’s group and for worship services, and Tim as a pastor and teacher in adult Sunday school classes. Together, they have also conducted counseling and pastoral care visits and sang on the worship team. 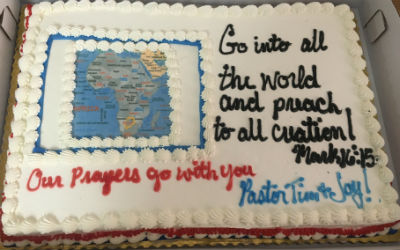 Community Church of God, Abby and Corey’s home church in Danville, Illinois, has also stepped up to support them in a variety of ways. “Our church family has truly become family in every sense of the word,” the couple said. “We can’t express how much love we have been shown by these amazing people during the last ten years.”

Also a relatively small congregation with roughly 130 members in regular weekly attendance, Community Church of God was the first to give to the Stocksdales financially, and thus far has pledged the largest amount annually of any of their partners. They also granted Corey, who serves as the full-time associate/youth pastor, a seven-week sabbatical this past spring so that the couple could dedicate themselves full-time to fundraising.

During the sabbatical, however, Corey became very sick with pneumonia. Even though he and Abby had booked countless church visits and weekday trips, they never had to cancel an event due to illness, even if it meant standing on stage with a 102-degree fever. “The blessing that came from that was watching God use my wife,” Corey recalled. Abby has served in their church as a worship leader, but, as Corey put it, was generally behind a piano and out of a speaking role. “It was so cool to watch God use her giftedness in a new way,” he said. “It set the stage for how we presented the rest of the sabbatical and even still.”

Currently, the Stocksdales are at 30 percent of their annual fundraising goal, but will need to raise two complete budgets—one for start-up and the other for ongoing giving—before they can leave for the field. They hope to move at the beginning of 2018, sometime between January and March.

The Coppess family is trusting God for financial support in the form of shares, where one share is equivalent to $1,200. Their goal is to raise sixty-five shares before they depart, hoping that they will be able to leave before the end of the year. “Our hearts are in Botswana,” the couple said. “We have a sense of urgency to get to work serving in the field, so we desire to leave immediately.” 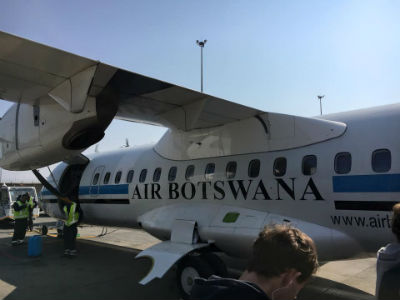 The Stocksdales are just as eager to start a life in their new home in Africa. Abby has been able to communicate with some local Botswana women via WhatsApp and Facebook and greatly anticipates meeting them in person. “I am excited about hugging our Botswana friends for the first time,” she said. “Also to see what it looks like there firsthand, smells like…just experiencing Maun and soaking it in. I’m ready for that!”

As they continue to prepare, Abby and Corey have asked for prayer in anticipation of the transition that is to come for their children Olivia (five), Simeon (four), and Declan (one), as they adjust to a new culture and home. They would also appreciate prayer over the fundraising process, selling their home, and the overall transition from American to Botswana.

The Coppesses’ fervent prayer is that the church would truly be moved to embrace Jesus’ command in Luke 10:2, which reads, “The harvest is great, but the workers are few. So pray to the Lord who is in charge of the harvest; ask him to send more workers into his fields” (NLT). They have also requested prayer for the wisdom to develop the discipleship program, safe travels, and, most importantly, continued unity among God’s people.

To support either of these missionary families, please visit www.chogglobal.org. Thank you!