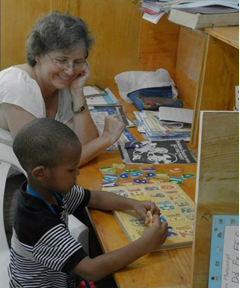 INTRODUCTION:
Deborah grew up in the Church of God and as part of the Missionary Board of the Church of God. Her parents, Kenneth and Sue Jo Good, were career missionaries in Korea, Jamaica, Australia, and Tanzania. Deborah spent her growing-up years on the field until she began attending Anderson College (now University) in 1977. After graduating in 1982, she moved to Oklahoma, where she earned a master’s degree from Southern Nazarene University.

Deborah lived in Oklahoma for twenty-eight years, seventeen of which she spent serving in Christian education. In December 2005, Deborah’s husband died, and by 2010, her two children were no longer at home. At a time in her life when she was finally comfortable, the Lord had other plans. In October 2010, Deborah followed the Lord’s call to the small island of Roatan, Honduras. In a very short time, the Lord has opened many doors for ministry, including Samuel Raymond Christian School (a community-based, bilingual Christian school), English classes for adults, and English classes for the police.

During the summer of 2014, the Lord made it abundantly clear that Deborah was to renew her ties with Global Missions, and in early 2015, she rejoined the Global Missions family. It has been thrilling to see God bring things full circle. She is overjoyed to have her daughter, Sarah, joining her in Roatan and is looking forward to partnering with Global Missions to further God’s kingdom work in Honduras.