By chogministries
Posted December 14, 2012
In All Church of God, Global Strategy
Missionaries’ Home Severely Damaged by Fire in Malawi, Africa2012-12-142012-12-14https://www.jesusisthesubject.org/wp-content/uploads/2016/07/ChogLogo-Light.svgChurch of God Ministrieshttps://www.jesusisthesubject.org/wp-content/uploads/2016/07/ChogLogo-Light.svg200px200px 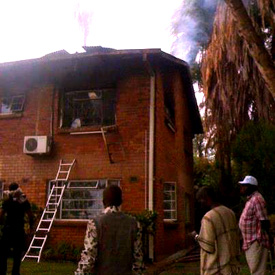 Imagine losing almost everything you own in a single afternoon. For Tammie Tregellas, missionary to Malawi, Africa, that became a reality recently. On Sunday, December 9, a fire broke out in Tammie’s home in Africa. She is presently on home assignment in the United States, and fellow missionaries, Tim and Josie Vickey, are ministering in Malawi in her absence.

The cause of the fire has not yet been determined, but friends of Tammie were alerted to the blaze and began to spread the word that help was needed. They, along with several people from the church that Tammie attends in town, partnered together to fight the fire and rescue what belongings they could before the smoke permeated the building.

The Vickeys, who were on their way to visit one of our congregations when they received word of the fire, returned home to join the others in fighting the fire.

No one was seriously injured in the fire, but Tammie’s bedroom, office, bath, and guestroom were destroyed. Part of the lower level, where the Vickeys are living, sustained smoke damage, and the Vickeys also lost a few belongings. Tammie Tregellas and the Vickeys are praising God for preserving the lives of those who selflessly stepped in to fight the fire that day, but they are struggling with the loss of their home. It will be some time before they can fully assess the extent of the damage to the residence in Malawi.

To partner with us in meeting the needs of Tammie Tregellas and Tim and Josie Vickey in the wake of fire, please donate to the Global Missions Emergency Aid Fund. You may also contribute by sending your donation to Attention: GM Emergency Aid, Church of God Ministries, PO Box 2420, Anderson, IN 46018. Be certain to clearly designate your gift to Project #42.20032.