Methodist, CHOG Congregations in Oregon Prove Jesus is the Subject

By chogministries
Posted January 11, 2018
In All Church of God, Give Life, Western
Methodist, CHOG Congregations in Oregon Prove Jesus is the Subject2018-01-112018-01-11https://www.jesusisthesubject.org/wp-content/uploads/2016/07/ChogLogo-Light.svgChurch of God Ministrieshttps://www.jesusisthesubject.org/wp-content/uploads/2016/07/ChogLogo-Light.svg200px200px 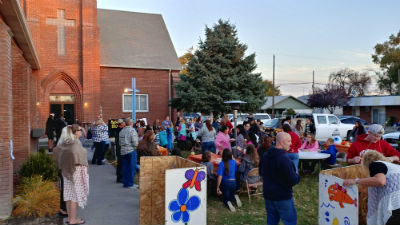 Ontario, Oregon, is a community of roughly 14,000 people, but like many small towns, many different small congregations gather in separate buildings on Sunday, often on the same street, sometimes singing the same music, and certainly worshiping the same God. Yet the mission has been given to all followers of Christ to make disciples, and the prayer of Christ is that we would be one. In contrast to the norm, two congregations in Ontario recently took a step in the right direction. As a result, both groups were more blessed than before, and one was overwhelmed by an incredible act of generosity and kingdom-mindedness. By such a not-so-random act of kindness, they proved that Jesus is indeed the subject.

Origins Faith Community began as a house church in 2007. The church plant, affiliated with the Church of God, crammed into the home of co-pastors James and Tammy Vogt. Not unusual among church plants, Origins grew too large for the home of the pastors, and has since relocated on more than one occasion. When their most recent landlord notified the church that their lease would not be renewed, the pastors got the word out that they were searching for a new place to meet. The local United Methodist Church answered the call.

“They answered us fairly quickly,” James explains. “They assured us that we would not be ‘homeless.’ We didn’t know what that would look like, but it was enough to know we had a home. We had looked at a couple other properties, but as a church plant without real assets, we didn’t have many options. So, in November 2016, we heard from the Methodists.” 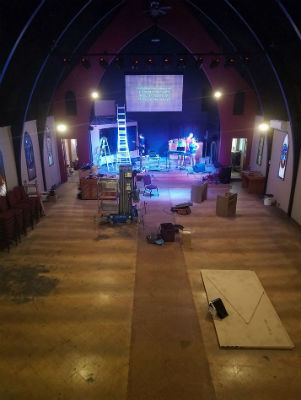 Sanctuary remodel in preparation for the move.

Tammy was confident through the process that God would make a way. After all, God had done so before for the church, and his character doesn’t change. “We’ve had leases change at other places, so in our experience God has always been two steps ahead of us. We were prepared for a time of waiting, but we ended up not having to wait all that long.”

A place to meet was really all Origins needed. For the Methodist church to offer that alone was generous enough. But when the Origins leadership got together with the Methodist church to discuss details, something even more incredible was about to happen, and it happened just a few meetings later. Tammy explains: “They just started off the meeting saying that the best and easiest way for them to handle this was to sell their building to us for a dollar.”

Stunned by the turn of events, James and Tammy sat at the table in silence for a moment. Noticing the silence, they were asked, “Well, do you want our building?”

“We said, well, it appears that God would have us have it,” Tammy continues. “We were overwhelmed.”

The United Methodist congregation in Ontario wasn’t the size it used to be. They’d actually gotten to know James and Tammy over the years and had already offered Origins free office space. But with a decrease in attendance also came a decrease in resources. The possibility of a merger was raised, but the style preferences of the predominantly older congregation made another opportunity more appealing—Origins would own the building while the United Methodists would continue to meet there. Logistics continue to be finalized, but through the grace of God, a win-win situation has developed. 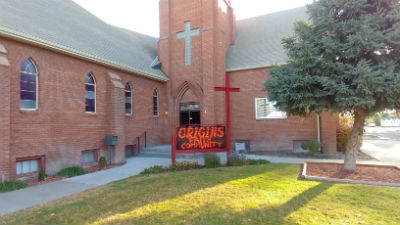 “The United Methodists were always interested in what God was up to through Origins,” Tammy explains. “They were very interested in supporting the kingdom work, and felt we were an extension of them. It was truly a kingdom mindset and sense of unity the whole time.”

Acts of kindness aren’t always easy. This was no simple feat for the United Methodist church, either. They vouched for Origins within their denomination, assuring leadership beyond their local community that this was the way God was leading. But in the name of unity, in the name of Christ, they pressed on.

Since Jesus is the subject, and the church is the people—not a building—James often refers to the arrangement as “two churches, one building.” He explains. “This is definitely a Jesus-is-the-subject thing. The United Methodists want this building, that they’ve invested in through their lives, to continue to do kingdom work. They’re more concerned about the kingdom than any individual empire. It’s beautiful to see. This is what partnership looks like to make a greater impact on the community.”

And a greater impact on the community there shall be. Origins Faith Community is committed to advancing the United Methodist’s legacy of love in the neighborhood. One example—Origins has already hosted two of block parties, and the United Methodist Church has been happy to support however they can. The new building also serves as a practical location for the church’s many outreach ministries, including a community meal and addiction recovery groups. “Origins is a unique people,” Tammy explains. “We are a people who have experienced some of the worst of life and therefore realize the true power of beauty and grace. One thing we often say here is that it’s all about who you’re becoming, not who you’ve been. This new building gives us the opportunity to continue reaching those we have answered the call to reach and to continue forward in our vision to raise the spiritual temperature of the Treasure Valley through service and love.” Origins truly is a faith community!

For Origins, the chance to be in this particular building brings the opportunity to be in a neighborhood instead of a business district, and brings the Vogts back home. Incredibly—divinely—James and Tammy felt the leading of the Spirit to select a home in that neighborhood from the very beginning. Now they’re just a hop, skip, and a jump away from a church facility poised to make more and better disciples for years to come—something they’ve already seen happen time and time again. Recently, they were thrilled to celebrate the baptism of fourteen believers!

In Oregon, across North America, and around the world, God is on the move in the Church of God. Join the movement. Reach our world. Donate today at give.jesusisthesubject.org.