By chogministries
Posted October 29, 2014
In All Church of God
Maximum Impact: Virginia and Maryland Congregations Unite2014-10-292014-10-29https://www.jesusisthesubject.org/wp-content/uploads/2016/07/ChogLogo-Light.svgChurch of God Ministrieshttps://www.jesusisthesubject.org/wp-content/uploads/2016/07/ChogLogo-Light.svg200px200px

The Maryland congregation had dwindled to about seventy believers. After consultation with Healthy Growing Churches, it became apparent that the church’s trajectory could only last five more years at best. David Bullock, now campus pastor of Clarksburg Church, recounts the available options available to the flock that was left without a pastor. “We could continue on our own,” he says, “or we could hire another pastor, but seek a mentoring relationship with 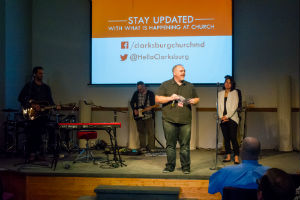 Fairfax. But the third option was to become a campus of theirs—kind of like a merger.” After much prayer, visits to Fairfax church, discussion, and wise counsel, the church voted to join Fairfax as one of its campuses.

“I have a passion for underutilized kingdom capital,” explains Rod Stafford, lead pastor of Fairfax Community Church. “Many of our churches are on the back side of their life cycle. At the same time, you have new pastors who have so much momentum, but are starved for capital. Clarksburg came to us and asked if we would consider them as a part of Fairfax. It was truly a unique kingdom moment.”

On September 28, Clarksburg Church launched its first service after a summer season of intentional prayer and waiting. The day was marked by fresh excitement, anticipation, and enthusiasm for what God had begun. More than two hundred people showed up to worship that day, capping months of logistics and preparation. 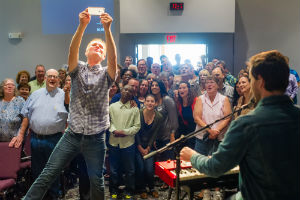 “Not to say that there weren’t some bumps,” David reflects. “But I know Rod would also testify that this was the smoothest church transition either of us had ever seen or could have anticipated. I’ve been in ministry for fifteen years. It seems that with any major decisions, there were lot of hurdles and a lot of questions. But God’s hand was on this and it was amazing how smooth it was.”

As a campus of Fairfax, the ministry at Clarksburg looks quite familiar, but on a smaller scale. Leaders from the main campus have generously offered their time, gifts, and energy to support the new work. “Basically as a campus, their DNA is complete through and through in the campus,” David explains. “Our services are nearly identical. With the launch we have a lot of lay leaders that have come from Fairfax to help train and work with us. I formerly was the worship pastor, but now I’m serving as the campus pastor. I oversee the weekend and the day-to-day congregational care needs.” Preaching and worship leading take place on a rotating basis with a team of communicators and worship leaders who come to the Clarksburg Campus to provide on-site ministry.

“Our goal isn’t to grow a church,” Rod insists. “We want to bless a city. So we will learn the needs of the city—which will be different than those of Fairfax—and then respond to those needs.”

For more information about the Church of God, visit www.JesusIsTheSubject.org.