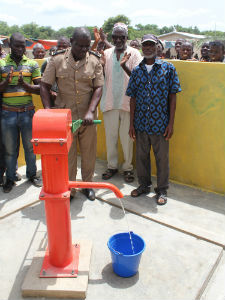 Jesus said in John 4:14, “But those who drink the water I give will never be thirsty again. It becomes a fresh, bubbling spring within them, giving them eternal life” (NLT). Larry and LeAnn Sellers have been missionaries at Côte d’Ivoire for many years now, spreading the gospel of Christ and bringing many people to salvation. Their most recent project involves the building of a well.

After learning about the living conditions of Sokora, a remote village with no church or mosque, and no drinking water nearby, Larry and LeAnn Sellers decided that it would be valuable for the community to have a well so that the people living there would be able to have clean drinking water. The project was a two-fold contribution to the community. Larry expresses, “We hope by bringing the people water for their bodies, they will also find water for their souls in Christ.” The process of drilling and constructing the well was a grueling one, but the hand of God was present. 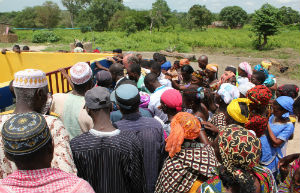 On the morning of May 21, 2015, the team started drilling in search of water. After drilling ninety meters deep, they had to stop as they had not found any water and was drilling solid rock. However, the first unsuccessful attempt at drilling did not stop them from looking for a second potential site in the same area to provide water. After they found that site, they started to work again, and after drilling seventy-five meters deep, they finally struck water. While the promise of clean sustainable water was good news, the drilling team had more work to do. The following day, the team went back to the location to pour a layer of cement slab, install the pump, put up the perimeter wall and gate, and plaster the walls. The walls were built to keep animals from contaminating the clean water. Finally, on the first Sunday of June, the well was completed. During this time, the Muslim and governmental leaders continue to recognize the contributions that the church has been making to the community, opening doors for the evangelizing the gospel.

Larry and LeAnn give God all the glory for the completion of this project. “We really had little to do with it,” they explain. The project was made possible by a donor in Virginia who wanted to leave a legacy in memory of her daughter who had passed away. The Sellers were aware of the need for a well in their region, and simply matched the funds with the need. It’s just that simple. Anyone, anywhere, at any time can be a part of providing clean water—and living water—for both the body and soul.

The project was also implemented in conjunction with the building of a new church in a neighboring village, Sokoro. After a church in Sokoro was burnt down, another one had been built. The two projects proved God’s faithfulness to his church. Larry and LeAnn Seller’s fervent spirit to spread the gospel of Christ in the community is well-represented in the building of this well. While water appears to be a basic amenity in our society, it is not for others. Similarly, the gospel may seem like basic knowledge for most, but for many around the world, its accessibility is made possible through the generosity of people like you and me.

Linette Tang is a communication intern for Church of God Ministries from Anderson, Indiana, and Singapore. She is currently studying math, computer science, and writing at Anderson University. Learn more about Global Missions at www.chogglobal.org.