By chogministries
Posted October 30, 2013
In All Church of God, Colleges & Universities
MACU, Ministries Council, and Missional Ministry with John Carney2013-10-302013-10-30https://www.jesusisthesubject.org/wp-content/uploads/2016/07/ChogLogo-Light.svgChurch of God Ministrieshttps://www.jesusisthesubject.org/wp-content/uploads/2016/07/ChogLogo-Light.svg200px200px 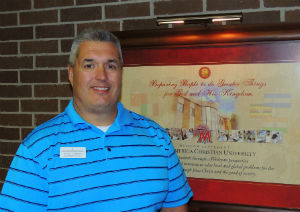 Pastor John Carney is a 1982 graduate of Gulf Coast Bible College (GBC), one of the previous names of Mid-America Christian University, (MACU). He also earned a master’s in leadership from MACU in 2009. He’s married to GBC alumna Kay (Gustin) Carney, who is also a 1982 graduate of GBC. John is the senior pastor of First Church of God in Hutchinson, Kansas, where he has served since 1999, and is serving his second term with the Church of God Ministries Council. In this interview with MACU, John opens up on each of these formative experiences.

MACU: What attracted you to GBC?

The Lord, that’s for sure! I had grown up in the Church of God and, of course, had heard of Gulf Coast as I was growing up, and when I attended youth camp. In Oklahoma one particular year there was a camp team that came from Gulf Coast. When I felt called to ministry and was ready to go to college, Gulf Coast was where I felt I needed to be. My sister had almost completed her degree at Anderson, Indiana, but I decided that Gulf Coast would be the best place for me.

MACU: You met your wife at GBC, didn’t you?

MACU: What were your areas of study?

Mine was in pastoral ministry, and hers was in psychology.

MACU: Then you later earned a master’s degree from Mid-America Christian University? How did that come about?

I had stayed in contact with the university and had served on the alumni council for a period of time while we were here in Kansas. About the time I went off the alumni council, the college launched a master’s in leadership program—an area in which I was interested and gifted. The fact that the program was offered completely online made it something I could do from Kansas, where I pastored. So that was appealing to me as well, and I graduated with that degree in December of 2009.

MACU: Can you tell me how your education—either GBC or Mid-America—has shaped your life over the years?

Well, my early GBC education definitely provided me with the foundational aspects for my pastoral ministry—now going on thirty-one years. I have said on several different occasions that I received my education from Gulf Coast but I really got my “official training” by being in ministry over the last thirty-one years. There are things you can try to learn, but until you actually do it, that’s when the real education begins!

MACU: Tell me about your work with the Church of God Ministries Council.

I’m finishing up my second term (eighth year) with the Ministries Council, the group responsible for overseeing the general director as he oversees the Church of God Ministries office. We are the governing and guiding body for the Church of God when the General Assembly is not in session.

It’s been a great experience to be part of this Council; it has enabled me to utilize my leadership skills for the church at large. My time on the council began as I completed my master’s research project for the SHAPE ministry. SHAPE is an acronym for Sustaining Health and Pastoral Excellence. My knowledge in that area tied together well with the needs of the Ministries Council.

MACU: When you were on the MACU campus with the Church of God Ministries Council, I heard you talking about your church and the inner-city partnership you’ve developed with another Hutchinson, Kansas, ministry. Would you tell us a bit about that?

We are just now in the transition stage of partnering with an inner-city Hutchinson ministry called Hub Community Center that focuses on the underserved in society—those who have fallen on hard times and who need a little extra help. Hub has been operating in Hutchinson for about two years, but they recently lost their building and were looking for another facility. Since First Church of God is also located in the downtown area of Hutchinson, it seemed natural for them to consider working out of our facility.

Carney talks mission, as well as his marriage, on Page 2.