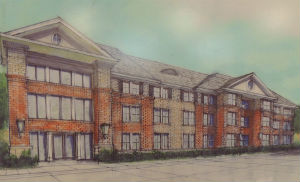 The event was held outdoors on the site where the residence hall is to be constructed and was attended by more than 300 members of the Mid-America community, including residential students, faculty, staff, as well as representatives of the Board of Trustees.

The decision to build the new facility was made during the fall meeting of the Mid-America Christian University (MACU) Board of Trustees on October 8th—and it was a unanimous one. Preparation of the construction site began within days of the vote.

The building will be the second new construction the university has started within a year’s time.  On October 10, 2013, Mid-America broke ground for Kennedy Hall, a 32,000-sq.-ft. classroom building that will be dedicated January 10, 2014.

“The construction projects we’ve undertaken are a response to our growing student enrollment,” said Mid-America President John Fozard. “Kennedy Hall allows us to address the need for additional 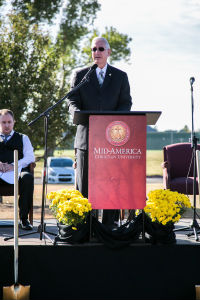 classroom space, to expand library facilities, and to increase faculty office and workspace areas. The new residence hall will provide for a growing residential student community and will enhance the campus experience, as well,” Fozard said.

Over the past six years alone, Mid-America has grown 203 percent. This will be the first new residential hall built since the campus was constructed in 1984.

The tipping point for the decision to build came this past spring when Oklahoma City was hit by two EF-5 tornados. The Moore, Oklahoma, tornado of May 20th caused no significant damage to the south side campus. In fact, 24 hours after power was restored to the campus the university had established a relief-support site on campus.

But the second storm on May 31st was another matter. The tree-toppling straight-line winds of that storm caused more than $500,000 in damages, including student housing damage.

Repairs were quickly made in preparation for summer camp events on campus and for students returning in the fall. All but one of the units was re-opened. “At that time,” President Fozard said, “it was clear we were reaching a point of diminishing returns on repairs.”

So, on October 8th, the trustees determined that—with Kennedy Hall virtually completed, and built completely debt-free—the university was in an excellent position to move forward with the new 30,000-square-foot residence hall. The facility is expected to open in August of 2014, just in time for the beginning of fall semester.