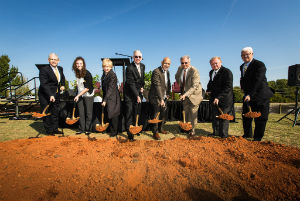 A crowd of more than 300 people gathered at Mid-America Christian University (MACU.edu) for the groundbreaking ceremony of Kennedy Hall, Wednesday morning, October 10, 2012. Attendees included friends of the university, faculty, and staff, as well as an array of distinguished guests.

The celebration marked the construction of a 32,000-square-foot education facility that will be home to a state-of-the-art University Library, classrooms, computer lab, and faculty offices.

President John Fozard called the occasion “a momentous day for Mid-America Christian University. Nothing highlights a university’s progress like campus expansion, and Kennedy Hall reflects the tremendous growth the university has experienced in recent years.”

The additional facilities will help accommodate this year’s 18.2% student enrollment increase over last fall, and an overarching growth of 169% over the past four years.

The lead gift to the project was made by Dr. Elton Kennedy of Mer Rouge, Louisiana, whose gift greatly advanced the campaign’s success. As a result, Mid-America is naming the facility in honor of Kennedy’s parents, Rev. Murrell Kennedy, 99, and his late wife Rev. Lolita Kennedy. Longtime Church of God (Anderson, IN) pastors who led congregations in Louisiana, Texas, Oklahoma, and Indiana. 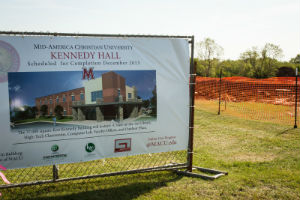 President Fozard said, “It’s a deep privilege for us to honor Murrell and Lolita Kennedy who modeled, as both pastors and revivalists, the commitments we cherish here at Mid-America—commitments of knowledge, devotion, and service.”

Elton Kennedy and his wife, Ann, attended the groundbreaking, as did Kennedy’s sisters Rev. Sylvia Kennedy Grubbs and Glenna Kennedy Oldham, along with extended family members.

Rev. Sylvia Grubbs offered a greeting to the crowd on behalf of the Kennedy family. She read from her mother’s Bible and handwritten notes by both parents, offering insights into her parents’ journey of faith and legacy of Christian love and ministry.

During the ceremony, President Fozard also thanked others who had made generous contributions to the project publically and privately, including the families of Jack Wilson and Charles Brown, who were in attendance.

President Fozard stated at the outset of the ceremony, “We enter the construction phase of Kennedy Hall with the building virtually paid for. We recognize that this is no small thing and we are grateful to all the friends of the university who have helped make this dream a reality.” Fozard went on to say, “But just in case you’re disappointed that you haven’t had a chance to show your support yet, let me just say we still have a ways to go to furnish the new University Library, classrooms, and faculty offices.”

It is estimated that construction on the building should be complete by December 2013. “We plan to coordinate the dedication of Kennedy Hall at that time with the celebration of the university’s 60th anniversary,” President Fozard said. “We look forward to that milestone and are proud to have the Kennedy name forever linked with the Mid-America vision of “Preparing People to do Greater Things for God and His Kingdom.”

In addition to President John Fozard, other representatives of the university, its board, and the Kennedy family took part in the morning ceremony. MACU Student Government Association President Jessica Martin brought a Scripture reading; Dr. Ronald Duncan, general director of Church of God Ministries, (Anderson, IN) led the invocation; Dr. Christian Morren, head of the School of Music brought special music; Dr. Cliff Sanders, school graduate and head of the School of Ministry brought faculty remarks; and Board Chairperson Claude Robold brought a rousing message based on the inspiring vision of the university: “Dream Bigger. Do Greater.” Trustee James Phillips, M.D. brought the closing Scripture reading and Provost Kathaleen Reid-Martinez brought the prayer of dedication.

Mid-America Christian University (MACU) offers a Christian liberal arts education through two dynamic colleges. The College of Arts and Sciences (CAS) offers undergraduate degrees to traditional residential and daytime commuting students at the main campus in Oklahoma City. The College of Adult and Graduate Studies (CAGS) makes college education affordable and accessible to busy working adults and graduate students. Programs are offered online, at the main campus, and through the north OKC location. MACU is an endorsed agency of the Church of God (Anderson, IN). Visit www.MACU.edu for additional information.