In what will forever be known in Mid-America Christian University lore as the “drive for a championship,” Malcolm Mann took the ball with four seconds left, drove the court, and put in a game-winning layup that spun around and found the net to give the number 14-ranked and fourth-seeded MACU Evangels a thrilling 100-99 overtime victory over the number 1-ranked and top-seeded Georgetown (Kentucky) Tigers and their first-ever Buffalo-Funds NAIA national championship on March 22 in the historic Municipal Auditorium in Kansas City, Missouri. 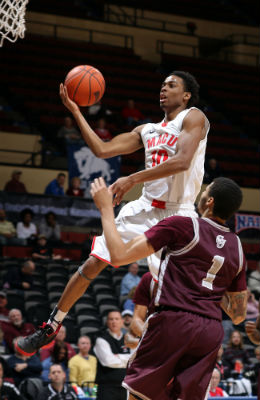 After a review of the monitor to make sure Mann got the shot off before the clock expired, it was officially ruled good and sent the Evangels into championship euphoria. Mann’s championship-winning score finished off a career night of twenty-three points for the junior guard. “If I didn’t see anyone [open] within two seconds, I was taking it myself,” Mann said. “I lost the ball for a little bit, and by the grace of God it went in.”

MACU head coach Josh Gamblin, the youngest coach to ever win a men’s national championship at the four-year level (just turned twenty-seven years old), was named the Rawlings NAIA Head Coach of the Year after guiding the Evangels to their first-ever NAIA national title in his first season at the helm. “We played a tough schedule, we’re tested, and we have a lot of transfers,” Gamblin said. “They love each other and play for each other, and when you do that, good things tend to happen.” On Mann’s last shot, Gamblin stated, “I don’t think we even got Malcolm a screen, but four seconds for him is a lifetime. He got what he wanted and it was a tremendous finish.”

The Evangels win over the top-ranked Tigers snapped their eleven-game winning streak, the second time this tourney that MACU has halted such a streak after beating Biola in the second round.

“We have really good players with very good kids and two great assistant coaches,” Gamblin said. “The administration has been great and the program was built well,” Gamblin said. “We had a bad taste in our mouth from the conference tournament and we won a bunch of good, tough games in KC.”

Accredited by the Higher Learning Commission (HLC), MACU is a private, Christian liberal arts college of the Church of God (Anderson, IN) that’s experiencing unprecedented growth. MACU offers a range of programs, such as behavioral science, counseling, business administration, Bible & theology, teacher education, leadership, and criminal justice, all taught from a worldview that promotes Judeo-Christian values and ethics. Article originally published at www.macuathletics.com.