Love Your City: Casper Church Lives Out Jesus’ Love through Acts of Service

By chogministries
Posted October 19, 2022
In All Church of God, Change the Story, CHOG, Western
Love Your City: Casper Church Lives Out Jesus’ Love through Acts of Service2022-10-192022-10-19https://www.jesusisthesubject.org/wp-content/uploads/2016/07/ChogLogo-Light.svgChurch of God Ministrieshttps://www.jesusisthesubject.org/wp-content/uploads/2022/10/highland_park_chog_casper_wy_serviceproj_adj.jpg200px200px

What was once called, “The Church has left the building,” is now referred to as “Love Your City.” As you might guess, it is a city-wide service project that has had a profound impact under the auspices of Highland Park Community Church in Casper, Wyoming. It started with the passion of helping and serving others, and has a way of making a difference in very practical ways. Just as Jesus washed the disciples’ feet, we are commanded to humble ourselves and minister to others, including performing tasks which they cannot do for themselves.

About six years ago, the congregation in Casper picked up their rakes, gloves, and plastic bags, and set out to make their city a better place. Pastor Darren Adwalpalker has served the Casper congregation for four years, but he loves the spirit behind the effort and the tasks they perform. The church has experimented with many different types of formats, such as small groups serving during their meeting times, or canceling Sunday services and making the event a church-wide thing. 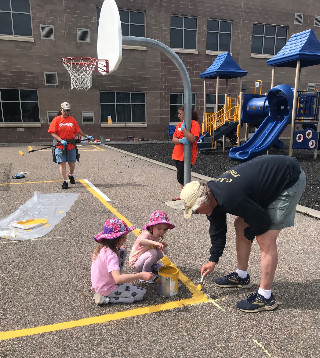 Playground striping, one of the various projects.

This past year, Highland Park combined with eight other churches in the area to have a huge community impact on a particular Saturday. The goal was to help the community, but also build a bridge in the body of Christ and extend the kingdom of God. “We want people to know that churches are not competitors, but people who want God’s work to be known and to promote God’s truth,” says Darren. Over three hundred people signed up online to prepare for the event. There was a prayer meeting on Friday night at Center Park Church where each participant received a T-shirt, some bags, and gloves. The next day, a variety of projects were undertaken from 8 AM to 12 PM, and then all gathered for a picnic to celebrate. The event included a worship team, an all-pastor introduction time, a promotion of various church ministries from all churches directly involved, and a devotional.

Each year the church seeks to plan the event with even greater efficiency and impact. Many in the community are not only thankful for their efforts, but they also look forward to the next opportunity to participate.

There are three main aspects to the projects. First, a city-wide clean-up has made a great difference in the parks by helping with trash pick-up and sweeping the area to clear debris and general care. Next, the team targeted the school districts. They re-striped many of the school’s four-square areas and basketball courts. Third, the churches seek to minister to the elderly. Families are able to submit a request online for help and most of them are from non-members of the participating churches. They see the activity as leading to evangelistic opportunities. 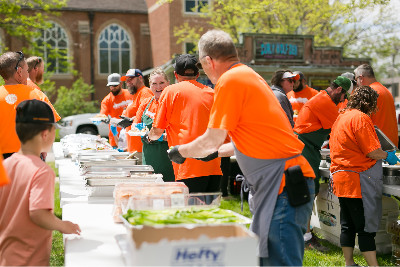 Reactions to this Love Your City campaign have been strong. They have received many letters and notes of thanksgiving for their labor of love, and one local park administrator said that what they accomplished in a few hours would have taken him weeks and months to happen. People often ask why the churches do this, and they are very pleased to talk about the why. The event also has a great impact on the congregations who take a sense of confidence that their actions truly make a difference in the lives of others.

Pastor Darren says that Isaiah 61 and Luke 4 are key to the event. When the Spirit of God comes upon us and we are able to preach the Good News, Jesus’ words have been fulfilled, and it is a blessing to be able to live this out. He notes that he always encourages the people to combine theology with service. “There is no separation between philanthropic work and evangelism. Theology is the motor behind our actions and service to the community.”

To learn more about the Church of God movement, visit www.JesusIsTheSubject.org. 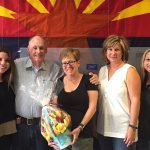 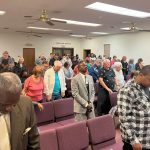