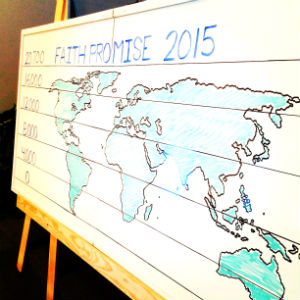 “Money unusually attained. Money deliberately retained. Money surprisingly regained. Money intentionally maintained!” Whether it’s your tax refund, a pay raise, an unexpected gift, fasting, or a commitment to a new level of stewardship, the Faith Promise concept has historically been one of the most important discipleship exercises among Church of God congregations. Like many local churches, Cypress Street Church of God in West Monroe, Louisiana, decided to step out in faith by making individual pledges to give beyond regular tithes and offerings. Though the church established a goal of $20,700, once Faith Promise Sunday arrived, no one could have guessed what would happen next.

Eyes brimming with anticipation gazed up at the progress of the congregation toward their Faith Promise goal. As pledges were tallied, a chart overlaying a map of the world symbolically represented the church’s growing commitment toward the global aspect of the Great 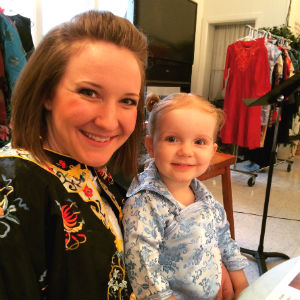 Commission. “Our treasurer added up the pledges and, as he did, he passed the ever-increasing totals on to my wife, who then filled in a bit more of the world until it was completely full,” Neil Oldham, Cypress Street pastor, explains. “Little did we know that we needed an ‘extra world’ to fill in! When they handed me the total, I had to look over at him and ask if I was reading it right!”

Cypress Street Church of God had just pledged more than $35,000—far surpassing their budgeted $20,700. Several weeks following this landmark event in the life of the church, the congregation is still basking in the afterglow of such a miracle. “I’m actually fairly new to Faith Promise, but I’ve really come to love it,” Pastor Neil explains. “Compared to other giving campaigns I’ve been familiar with (usually involving building or debt), there’s so much more life and excitement generated by Faith Promise giving! It gives us news to celebrate all year long as we are able to help missionaries and other ministries in their times of need, all because of the church’s faithful giving. There’s so much blessing that comes with exponentially expanding the reach of your church’s ministry by partnering with people who are doing various things, things which you may not be called to physically do, but are blessed to be a part of, nonetheless.” 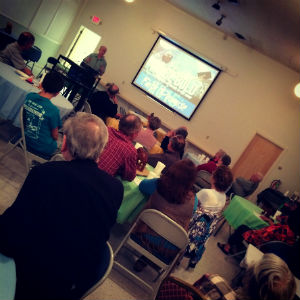 church’s latest step of faith to be an example of the kind of boldness to which God is calling all of his people. That’s why Neil’s especially excited about the Church of God movement bringing the ideas of boldness and reclamation to light at Church of God Convention 2015 (June 22–25 in Oklahoma City). One of the organizations Cypress Street committed to support through this year’s Faith Promises is a ministry that boldly reclaims the lives of women caught in the sex trade. “I’m excited to see the church, as a whole, gaining momentum in being the church together, rather than just doing church together. It seems to me that boldly reclaiming that which hell has stolen is exactly what Jesus told us to pray for when he said to pray, ‘Your kingdom come. Your will be done on earth as it is in heaven.’ God’s kingdom is where what’s wrong gets set right. The church ought to be in that business in the here and now.”

During Faith Promise 2015, Cypress Street also committed a portion of that which will be raised to missions, including the work of Sherman and Kay Critser with Native American Ministries. The church was especially blessed to have them in attendance for the celebration. “Our prayer,” Neil concludes, “is that God would take what we give in faith and use it in far greater ways than we ever could have if we’d held onto it ourselves!”