By chogministries
Posted February 7, 2019
In All Church of God
Lori Salierno-Maldonado: A Marvelous Heritage, A Reclaimed Future2019-02-072019-02-07https://www.jesusisthesubject.org/wp-content/uploads/2016/07/ChogLogo-Light.svgChurch of God Ministrieshttps://www.jesusisthesubject.org/wp-content/uploads/2016/07/ChogLogo-Light.svg200px200px 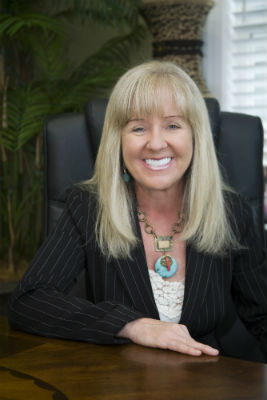 The daughter of longtime evangelist Gerald Marvel really needs no introduction. In fact, her influence is so broad that family heritage needs no mention to solidify her place in Church of God history. Still, a telling of her story, without the impact her family, and her brothers and sisters in the Movement, have had on her life, is anything but complete. Lori Salierno-Maldonado has been in the company of such notable influencers like Mother Teresa, but she couldn’t be more excited to spend time with her Church of God family in June. Her marvelous heritage, unexpected journeys, and reclaimed future combine to position her well to breathe, speak, and give life this year at Convention 2019 & General Assembly in Orlando, Florida.

“My mother and father were the greatest influencers in my life and ministry,” Lori reminisces. “I was a very feisty, self-willed child. They provided consistent discipline (which I needed all the time) and constant love. I think the thing that made all three of us Marvel children go into the ministry was the amount of laughter, fun, and music that was constantly in our home. We saw the hardships that the ministry can bring, but what we experienced in the home balanced it out so well that both my brothers and I said Yes to the call of full-time ministry. Spiritually, my parents showed me that the sky was the limit and that I could do anything that I wanted to do for Jesus. There were no restrictions on the vision God had for my life.” 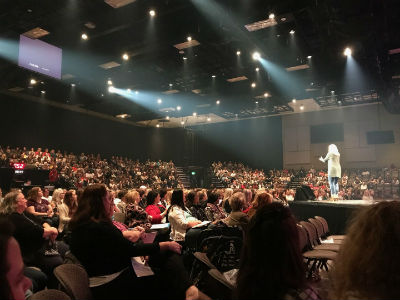 Lori Salierno-Maldonado began exercising her God-given gifts at an early age. As an eighth-grader, she began substitute teaching second graders in Sunday school. As a tenth-grader, she had her own class, growing it from six children to more than twenty-five in just one year. As a junior in high school, she received a call to full-time ministry and, as a senior, she took Arthur Kelly’s Bible course at Warner Pacific College (now University). “After that,” she reflects, “I knew I wanted to be in ministry. I love the Church of God! I love the way the Church of God believes that women can do ministry, preach, and lead. The Church of God mothered my call and has been a great movement that I deeply believe in.”

When on staff at Church at the Crossing in Indianapolis, she took an interest in the life of Mother Teresa. In her pursuit to learn more, Lori wrote a letter to the Nobel Peace Prize winner and received a response. Mother Teresa had invited her to travel to Calcutta, India, and work in her homes there. Lori ended up leading her first Anderson University Tri-S trip to Calcutta at just twenty-eight years old, ultimately meeting with Mother Teresa four times in a total of five trips to India. “She influenced me greatly in starting the nonprofit I now lead called Teach One to Lead One (T1L1),” Lori recounts. “She told me that she worked with the poorest of the poor and challenged me to find the darkest spot in my own country and be Jesus to my people. [Today] we work with the roughest of the rough kids in our public schools and juvenile courts by placing mentors in their lives, teaching them character and leadership. I have a picture of Mother Teresa and me, along with a copy of her letter to me, hanging in my office. The picture reminds me that God uses simple people to do his work.”

With so much demand on her life, Lori could easily reach burnout. As the author of several books, she’s encouraged her readers to order their private lives, but that begs the question—how does Lori order her own life? “One of the things I do is live my life by my priorities,” Lori explains. “My priorities determine how I spend my time. I have no less than seven priorities at any one given time. Any more than that, I would burn out, and any less than that, I would be under-challenged. I’m pretty strict with my boundaries. I meet consistently with an accountability person who I call my “rooster” (see my book, When Roosters Crow, published by Warner Press) to ask me the tough questions. Throughout the year, I meet with my spiritual directors Gordon and Gail MacDonald to have them look at the direction of my life, ministry, marriage, and personal walk. These meetings keep me on track and are a great encouragement. I have seen too many people burn out in ministry and I intend to burn on and finish well.”

In her spare time, Lori Salierno-Maldonado loves hiking, cycling, and travel. But one of her favorite things to do is spend time with her church family. 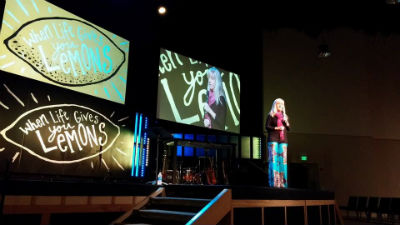 “It’s been a decade since I last spoke at the Church of God Convention,” she explains. “From that time, until now, I have gone through a time of brokenness and restoration. I am very excited about speaking at the convention in Orlando because I believe we, as the Church of God movement, are reclaiming broken people and showing how they can be restored. My life is a perfect example of that message. I am honored and humbled to have been invited to address the beautiful people of the Church of God. What a huge privilege!”