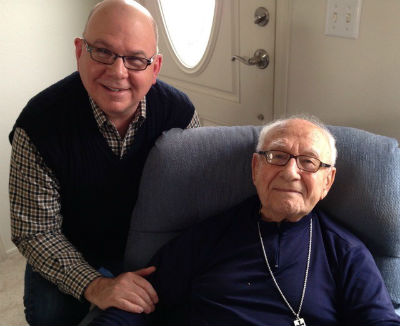 1916. That was the year former missionary Ernest LaFont was born. Well-known across the movement throughout the 20th century, he and his wife Grace were regarded by both pastors and laypeople, at home and abroad, as exemplary pillars of the faith. Chances are pretty good that either you are someone who was blessed by the ministry of the LaFonts, or you know someone who was. From Panama to Egypt, to Lebanon and finally Washington State, the widespread reach of this Pacific Bible College (now Warner Pacific) graduate over the span of a lifetime has not ceased, but continues to this day. Family member and friend Bob Moss of Church of God Ministries knows firsthand the incredible impact of Ernest LaFont on the movement, and is honored to offer just a glimpse of the harrowing circumstances that shaped this man of God.

Two times Ernest and Grace LaFont lost everything. But they didn’t lose everything. Before the days of mass transit by air, it wasn’t uncommon for missionaries to reach their destination by sea. It was the era of the Skaggs and the Albrechts, the LaFonts were aboard the Andrea Doria en route to the United States for home assignment from Egypt. But when their ship collided with a Swedish liner known as the Stockholm, they had to be rescued. Ernest, Grace, and son Leland lost all their earthly possessions except the clothes on their backs and, thankfully, the passport in Daddy’s pocket. Remarkably, their faith and their peace were still intact.

That was 1956. While serving in Lebanon in 1975, it happened again. War broke out, forcing the LaFonts to flee during the night in an American embassy vehicle. Thankfully they escaped harm, but were only able to take one suitcase each. Based on conversation with Ernest over the years, Bob Moss beams when he thinks of the missionary couple’s amazing resilience to difficult life circumstances.

“Ernie, and Grace [now deceased], had an amazing sense of humor,” Bob explains. “They had the ability to laugh in the midst of where most of us would be in peril. During the war in Lebanon, a bomb went off nearby and cut the power to their home. They had agreed beforehand that, in case of emergency, they would meet in a certain safe place in the house. In the dark, the two of them got on their hands and knees and crawled from different places to meet. They couldn’t see and, in the dark, banged their heads into each other, but fell over on the floor, laughing the whole time! I can easily see them doing that because that’s just the kind of people they were.”

Ernest could appropriately be described as a legacy missionary. Though he has accomplished much by the grace and power of God, he doesn’t feel he’s arrived by any means. Following his years as a missionary, he served Washington State as area administrator for several years. He then became the pastoral care pastor at First Church of God in Walla Walla, Washington (following his brother, Frank LaFont, a twenty-eight-year missionary to Africa, who preceded him in that role). Retirement is not in Ernest’s vocabulary, as even today he continues a ministry of prayer and sending cards to those in his home congregation of First Church, now known as Blue Mountain Community Church. To this day, he continues to impart wisdom and raise the bar of Christlike excellence to everyone with whom he has contact. Bob Moss is one of those persons. When asked about one thing about Ernest’s life and witness that has made a lasting impression, he cites two.

“First, he taught me the perspective of being a citizen of heaven on earthly assignment. Material things weren’t the focus of their lives. That’s how they were able to take their material losses in stride. Second, they truly lived as international people and had a wide group of loyal friends from Egypt and Lebanon and, as a result, they helped me begin thinking more globally as a pastor. When you’re truly international, you begin to see the world in a larger scope than just your American lens. In my own travels to the Middle East, the older saints still speak in reverential tones about Ernest and Grace. He is the embodiment of what Paul said in Philippians 4 about being content in all circumstances. Even now, in assisted living, he is content. ‘I have everything I need,’ he says.”

Learn more about Global Strategy at www.chogglobal.org. Were you blessed by reading this story? Support the ongoing work of Church of God Ministries with your gift to the World Ministry Fund at https://www.jesusisthesubject.org/world-ministry-fund/.