By chogministries
Posted December 15, 2021
In All Church of God, CHOG, Great Lakes
Longstanding Local Tradition Spotlights the Christ of Christmas2021-12-152021-12-16https://www.jesusisthesubject.org/wp-content/uploads/2016/07/ChogLogo-Light.svgChurch of God Ministrieshttps://www.jesusisthesubject.org/wp-content/uploads/2021/12/living_nativity_1_wide.jpg200px200px

His family has been involved in an annual local tradition at Maple Grove Church of God for many years. Planted in the Anderson, Indiana, congregation in 1984, he and his family have been a vital part of the community’s beloved Nativity Pageant. John Aukerman says, in fact, that he has played almost every male part in the production.

“I’ve played anything from a shepherd to all three Wise Men,” says Aukerman. He has both funny and poignant stories from over the years of his family being involved in this ministry. The pageant started in 1975 by the employees of a company on Broadway Street called the Layman Life Insurance Company. The narration, still used today, was recorded by Dr. Dale Oldham, the founding speaker of the Christian Brotherhood Hour, the radio ministry of the Church of God now known as Christians Broadcasting Hope (CBH).

One other church, “that we know of,” Aukerman notes, also has the soundtrack and pageant—West Court Street Church of God in Flint, Michigan. Maple Grove Church of God took responsibility of the pageant in 1978 and it has been held on their property ever since.

Actors dressed up, ready to perform at Maple Grove.

Aukerman wants to make it clear that Maple Grove doesn’t see itself as the owner of the Pageant. “We are only its steward—we exercise temporary custody of the soundtrack, costumes, set, and props.”

He goes on to say that in 1978 they accepted the stewardship with the understanding that they would present the Pageant without charge to the residents of the town and county each year as a free gift to the community. There has never been any solicitation of donations, nor is it used as a “church growth” event.

With that said, Aukerman shares the many memories of him and his family’s involvement over many years while being a part of the congregation. Presently, his son, Randy, is in charge of the technical part of the ceremony. In fact, Randy was able to take the original reel-to-reel recording and make a digital loop timed just right for each performance. Each night of the event there are at least three different presentations, one after the other, offered to the public.

Come rain, snow, winds—the Pageant has weathered many winters, yet the numerous volunteers have endured it all. Members of the congregation work in the kitchen to prepare and serve hot drinks and cookies to the visitors, make and keep the costumes in tip-top shape, build the set, secure donkeys and sheep, and direct traffic in the parking lot.

How much in advance do they need to prepare? With a chuckle, Aukerman says twenty minutes before the first showing. “Well, about six to eight weeks to set everything up and prepare, and round up volunteers interested in being an actor in each presentation.” He shares his son’s ability to set up all the electrical and floodlights and the little stable made of wood. 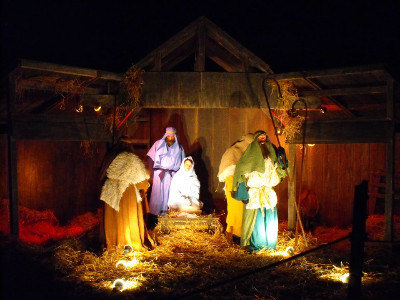 Shepherds visit the manger during the presentation.

“It folds flat and goes in the shed out back when we’re done.” But, what about that inclement weather?

The show must go on, except in heavy rain; some of the costumes are dry clean only, and it’s not safe to run the lights in a pouring rain. People have sat in their cars with the windows cracked to listen to the pageant during very cold and windy productions. But they still come.

When asked about some interesting memories, Aukerman was jovial in sharing the time his beard fell off while bowing down to Baby Jesus in the manger. He says, “Thankfully my back was to the audience and the little boy beside me picked it up and handed it to me.” Then there was the time when a donkey decided to run down the street almost to the busiest intersection close by. Cookies and hot drinks were also smuggled out to Mary and Joseph in the cold.

Then, there was the time when he said they were wondering whether it was still worth it to do the Pageant. A few days after that year’s production, the director was shopping when a woman asked her if she had been in the cast the previous weekend. She said yes. The mother told how her teen son was depressed, but she took him with her to see the Nativity Pageant.

“Her son had plans to commit suicide before he had seen the Pageant, but afterward his whole life outlook had changed,” Aukerman explains. “This is why we do it. We don’t know whose life might be touched by this.”

COVID shut them down last year, but this December, Maple Grove Church of God presented the Pageant for the 43rd year. The bleachers were full. People really need something positive to look forward to, and this tradition will continue for as long as there are folks to step up and volunteer to serve the local community. 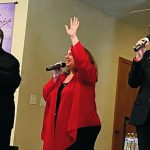 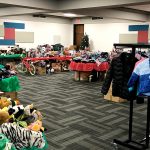 A Merry Christmas for the Movement Marked by Worship, Fellowship, and ServiceAll Church of God, CHOG