By chogministries
Posted May 4, 2021
In All Church of God, Change the Story, CHOG, Western
Light and Liberty Unite AZ Church across Language Gap, Boost Witness2021-05-042021-05-05https://www.jesusisthesubject.org/wp-content/uploads/2016/07/ChogLogo-Light.svgChurch of God Ministrieshttps://www.jesusisthesubject.org/wp-content/uploads/2021/04/westside_glendale_nativity_truck_adj.jpg200px200px

Josué Hernández left the pulpit years ago to move in a new career direction, but it seems God had other plans. “I was not planning on starting a Hispanic ministry,” he says. “I had just resigned from a position at another church to study social work and help the church in that way—you know, prepare myself as a pastor to help those families with some counseling skills. That was my goal.”

Enter Mike Hodges, who was, at the time, the student ministries pastor at West Side Church of God in Glendale, a sprawling suburb west of Phoenix, Arizona. He says, “West Side decided to go into the neighborhood around us and ask a couple questions to people about what our church could do to be of more service to them. Every other door or more was answered by a Hispanic family.” The church leadership had been considering bringing on a new staff person in another area, but quickly pivoted to exploring the possibilities of a Hispanic ministry.

While working on his social work studies, Hernández ran a window-cleaning business that brought him into contact with West Side’s pastors, and they soon approached him about joining them. Josué didn’t immediately jump at the chance, but it wasn’t long before he felt the call. To be more precise, it was a few hours later.

“I got a phone call from another pastor I know in New Mexico, who asked the same thing. And it was only a couple of hours later,” Hernández recalls with a wry smile. He conferred with his wife and prayed about the offers before deciding to take the position in Glendale. That was in 2007, and Josué and Mike—who is now the lead pastor—have each worked to “be the church” to the people who attend the English-speaking and Hispanic worship services they offer. 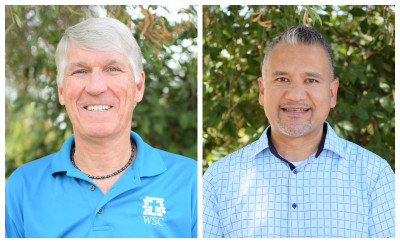 Recently, though, West Side has brought some of those pieces together, especially when it comes to outreach in their part of Glendale. The most notable example was last December’s exuberant caravan through the neighborhood streets. About fifteen to twenty cars and trucks—lit up like parade floats with Christmas lights, sacred and secular decorations, and children in costumes tossing candy—surprised their neighbors with holiday and holy Christmas music for about forty-five minutes on the evening of December 19, 2020.

“I thought it would be something that would involve the families, staying safe yet reaching out to the community in spreading joy,” Hernández says. Mike Hodges adds, “At that point, there were still a lot of people who weren’t getting out a whole lot, and I think people enjoyed it. The reaction from the neighborhood was something special.”

The church followed up a month after Christmas, delivering postcards to the homes along the parade route and inviting people to church.

“We’re just trying to keep a presence in our community,” Josué says. “More than a building, we want people to know we are there, and that we care for them and want to help out in whatever way we can.” He says their efforts have led some of those neighbors to attend church services and other events.

Hodges and Hernández say they plan activities where the two groups can come together. Sometimes that’s a combined service, such as on Easter morning this year. In addition, they have started putting some ministries together.

“The two women’s ministries try to plan and do things together,” Hodges says. “Our student ministries are now together as one ministry.” Formerly, Luz y Libertad offered programming for 7th through 12th grades, and the English ministry staff did the same. Now the two groups are a combination of young people from both the English and Hispanic households, with one group for 6th through 8th grades and another one for the high school grades.

“Our vision as a church is ‘Be the church,’ and so we’re always looking for ways that we can be the church in the community in reaching out,’ Hodges says.

Hodges and Hernández are excited about how far their two ministries under one roof have come since they began in 2007 and where God might lead them in the future. 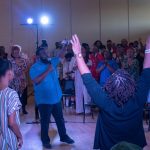 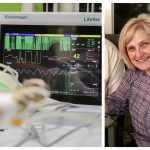 Why Me? A Pastor’s Inspiring TestimonyAll Church of God, Central, CHOG