Let Me See Jesus Only: A Blind Pastor’s Journey of Joy

By chogministries
Posted March 23, 2016
In All Church of God, Great Lakes
Let Me See Jesus Only: A Blind Pastor’s Journey of Joy2016-03-232020-02-29https://www.jesusisthesubject.org/wp-content/uploads/2016/07/ChogLogo-Light.svgChurch of God Ministrieshttps://www.jesusisthesubject.org/wp-content/uploads/2016/07/ChogLogo-Light.svg200px200px 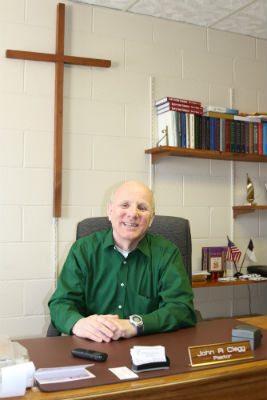 John Clegg’s life was unraveling all around him. Years of drug addiction, promiscuity, and worsening eyesight was taking its toll. One fateful day he found himself sitting in his recliner, gun under his chin, ready to end it all right then and there. But that was the old John. That was before Jesus Christ changed his life. Though he cannot see his hand in front of his face today, he looks back and sees God’s fingerprints everywhere. For eighteen years, John has served as pastor of Southside Church of God in Muncie, Indiana. In spite of his blindness, this pastor says he sees farther now than he could ever see before.

“Because I’m not looking for the same things,” John explains. “My eye was on my job, my new car, women, whisky, and pain pills. But now I’ve seen Jesus. I’ve seen the church. I’ve hit the bottom, and I won’t go back.”

Rock bottom was not a happy place. John Clegg was born with a night blindness called choroideremia. The disease is progressive—it may take years for total blindness to ensue—but total blindness is almost certain. His peripheral vision was the first to go, soon followed by his job, his family, and the hope he thought he had. More than the physical limitations, John’s problem was a sin problem. “I had all these nice things, and then everything began to fall apart on me,” John recollects. “My world grew really small. As I placed a gun under my chin, the phone rang. I didn’t answer it, but my son’s voice could be heard over the answering machine: ‘Daddy? Are you there, Daddy? I love you, Daddy. I want to come home, Daddy.’” John threw the gun down, and determined it was time to reunite with his son. 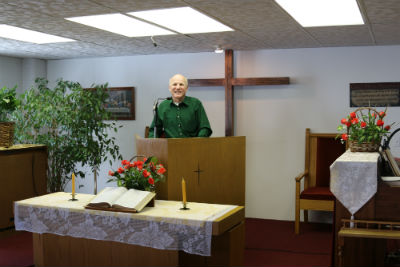 Peace remained elusive, however, as John had to jump through some hoops to reach his son. One of those hoops he would have preferred to avoid was conversations with the pastor of the church his son was visiting at the time. This was the same pastor that John had cursed and kicked off his front porch just a month earlier. Not without conflict and hesitation, the Lord wrestled John out of the devil’s clutches and into God’s kingdom of peace. John was a new man.

One of those “continuing-to-grow” moments came while John was adjusting to his walking cane. A car came whizzing by, turning right in front of John onto a muddy driveway. In a fit of anger, the driver jumped out of his car and shouted, “What’s the matter with you? You blind or somethin’!?” John stepped about four feet into his yard and aggressively responded, “As a matter of fact, I am!” The guy turned and walked into the house, cursing as he went.

John can look back on moments like these and smile because it does not reflect the man he is today. “Don’t take life so serious,” he advises. “Each moment of my day is precious to me. People talk about getting up in the morning, and their feet hit the floor, so they must be doing all right. But one day I’m gonna get up and my feet may not hit the floor, but I’ve got something better. With Jesus, I’ve got a picture of what life is really all about.” 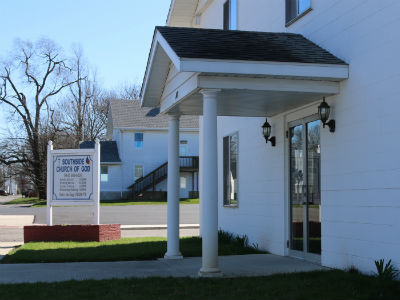 Like the Apostle Paul, a dramatic conversion did not, however, mean life would be a rose garden. But as Pastor John puts it, “God didn’t promise me a rose garden, but he promised to be the rose in my garden.” Whether his blindness is a thorn in the flesh or not, John claims the precious promises of Scripture, which he absorbs through his audio Bible. “Some days there are tears running down my face,” he explains. “There have been times my hands were shaking, times I couldn’t hardly get off the floor while praying. We have to expect the devil’s going to throw everything he can at us. But greater is he that is in me than he that is in the world! And I can do all things through Christ who strengthens me!” Therefore, to those called to minister in spite of physical limitations, John replies with Scripture, “Trust in the LORD with all your heart, and lean not on your own understanding; in all your ways acknowledge Him, and He shall direct your paths” (Proverbs 3:5–6 NKJV). “We can’t lie to ourselves,” John adds. “I have limitations. But the most serious of those limitations has already been conquered through Jesus.”

John Clegg lost all of his remaining vision between 1998 and 2008. But like C. W. Naylor, he has found the secret of the singing heart. Like Dale Oldham, John would rather see Jesus than see anything else. So, John dutifully carries out his ministry responsibilities day in and day out. He can’t drive to the jail where he’s ministered to more than six hundred different inmates over the course eight years, but his wife or the bus give him a lift. He can’t prepare sermon notes like most pastors, but he uses a voice recorder to “jot down” ideas and points.

In fact, it was while waiting for the bus that John’s journey of joy was exemplified yet again. One of the ladies he came to know through ministry outreach was nearby, and Pastor John piped up with, “Your hair is looking nice today!” She replied, “Well, you’re losing yours!” With feigned horror on his face as he reached to touch his scalp, John exclaimed, “What?!”

“I have to accept the things I cannot change,” Pastor John reflects. “But the good news is that these things are just temporary. They ultimately don’t mean a thing.”