Layperson Launches, Leads Ministry for Families of Children with Disabilities

By chogministries
Posted May 20, 2019
In All Church of God, Great Lakes
Layperson Launches, Leads Ministry for Families of Children with Disabilities2019-05-202019-05-20https://www.jesusisthesubject.org/wp-content/uploads/2016/07/ChogLogo-Light.svgChurch of God Ministrieshttps://www.jesusisthesubject.org/wp-content/uploads/2016/07/ChogLogo-Light.svg200px200px 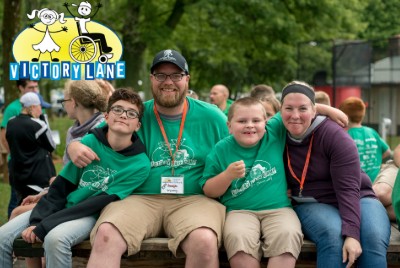 Victory Lane Camp is about building community in Jesus’ name.

“No family should have to raise their children facing disabilities alone.” That’s the premise of Victory Lane Camp, a parachurch ministry in New Castle, Indiana, founded by Brett Fischer. Brett and his family, who have called South Memorial Drive Church of God their home church since 1999, have experienced life’s ups and downs while brothers and sisters in Christ came alongside. When Brett felt God call him to start a camp ministry that would reach the whole family of children with disabilities, the church was there to provide prayerful and financial support—support which continues to this day. Victory Lane Camp didn’t just drop out of thin air; a series of dots had to connect to bring to life one of the most life-giving parachurch ministries anywhere. Behind the life change, the baptisms, the marriages restored, and the children transformed is a God who has called and equipped Christ-centered laypeople for the task.

Early in his career as a pediatric physical therapist, Brett witnessed firsthand the intense strain on families while their children went through physical therapy. He tells the story, of an exchange he had with one mother, which proved catalytic in a shift of his priorities. “What are your goals for your daughter?” Brett asked, assessing the progress of the therapy. The mom responded, “Well, I want her to grow up, graduate high school and college, get married, and have my grandkids. But since none of that will ever happen, I guess I will answer the question you need to write in your paperwork.” To the unsuspecting, recent post-graduate, her response was a bit startling and sad. This conversation was only the beginning of what God was stirring in Brett’s heart. 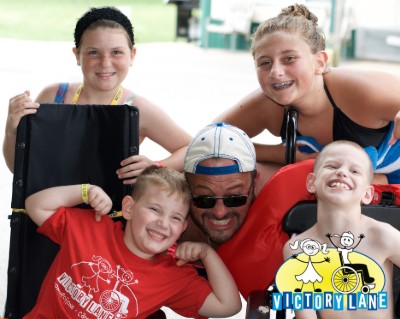 In 2006, Brett took part in Chuck Colson’s Centurion program, through which he was mentored to answer the call of ministry within his own sphere of influence. Brett and his wife had met at camp, which also began to cement his love for what God can do in a relaxed environment, removed from the normal cares of life. A few years later, he was working with a ten-year-old boy recovering successfully from a brain tumor only to hear about the suicide of his mother—a community and church leader—not long afterward. “Who is ministering to the entire family?” Brett remembers asking himself, realizing the great struggles these families face without others ever knowing. He knew then and there it was time to do something, though he had no idea what or how.

Today, Victory Lane Camp has proven to be the what, and the Lord’s power and favor has been the how. They offer two camps per year, with plans for more; one takes place in New Castle, while another takes place in Martinsville, Indiana. The camps last four days, but plans are also in place for some longer ones and shorter ones, to maximize impact on the children and accommodate the needs of “serving families.” Serving families, the key to all Victory Lane Camp events, are composed of volunteer members of the community who aren’t facing disabilities, but have a heart to care for those who do—and the families.

“Many of these families have been turned away by the church and by society,” Brett explains. “Building community with families, with the hope to lead them toward conversations about Christ’s love, requires families who understand Christ’s love to be willing to step into a new role and see them as missionaries to families that are distinctly different than them. We call these families serving families and recruit them from partnering churches. Ultimately, these serving families are fully equipped by the Victory Lane Camp team to understand the complex needs of these families and how to walk in their shoes for a few days. When these families leave camp, they are encouraged to connect outside of camp and other events to keep the relationship going. 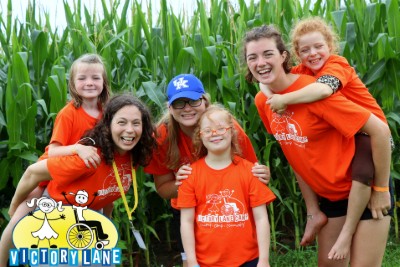 In the heart of corn country, east-central Indiana!

In so doing, Victory Lane’s mission extends beyond the families to the church to the general public. They actively train people to interact in the culture of families with disabilities and build bridges of love and acceptance.

Families of children who face disabilities also desperately need community, and more than just once or twice a year. That’s why cook-outs, birthday parties, talent shows, and other short, but fun events are on the Victory Lane’s calendar. It’s also why they host retreat weekends for mothers and for fathers of disabled children, not only to train and encourage them in their unique roles, but to let God renew them, as well. Victory Lane Camp’s ministry, which keeps being refined by experience and the Holy Spirit’s leading, is proving to be a model built for replication. Brett firmly believes Victory Lane’s unique ministry is necessary across the country and beyond.

“We’ve seen marriages restored, kids with Asperger’s socializing with peers for the first time, and we’ve traveled to see kids get baptized, and even attended a funeral. Victory Lane Camp is an extension of the church. Faith is evidence of things unseen, so from the beginning I’ve been fully assured that God has been in it and blessing it. Time and time again, God shows up and surprises us with more and more of himself every time a new family arrives to camp….To know you’ve played a small part is a very humbling experience.”

Learn more about the incredible ways Victory Lane Camp is giving life to their community at www.victorylanecamp.org.