Law Enforcement, Race, and the Church

Conversations about race and policing are nothing new. But several high-profile tragedies have kept the conversation front and center in the public eye for the last eighteen months. Maybe the early pandemic “sheltering in place” orders and daily case numbers kept us more tied to our news coverage than before. Whatever the reason, more people were paying attention when George Floyd, Breonna Taylor, and Rayshard Brooks, among others, were killed in the summer of 2020. A year later, the conversations are still happening. We are still looking for solutions. Two Church of God pastors recently spoke about the issues—one from the perspective of a former law enforcement officer, and the other from the perspective of a Black pastor in what he describes as a “rough” neighborhood.

Pastor Darian Bourez is five years removed from the law enforcement season of his life. Before retiring and launching Mustard Seed Acre and the Church at Mustard Seed Acre in Exeter, California, with his wife Summer, Darian served for fifteen years with his local sheriff’s department doing corrections work, patrol, community-based policing, SWAT, and detective work with the Gang Violence Suppression Unit. While he doesn’t seek out conversations about race and policing, Darian says he will engage in those subjects when they come up. He has a perspective a lot of people don’t have because they haven’t worn the uniform.

“The first week at the police academy they tell you, ‘You are placing a target on your back,’” Darian says. “Law enforcement officers aren’t being invited to a party. They are called in because something has gone horribly wrong. Each call is to someone’s worst moment. And when that moment is over, the officers are called to go to someone else’s worst moment.”

Even as he shares the responsibilities and risks police officers bear each day, Darian doesn’t shy away from the stories on the news. “There are bad apples in law enforcement—as in every profession. The officers in the George Floyd case tarnished the badge. And law enforcement has to stand up against bad officers. The good ones have to hold the bad ones accountable.” He states that nepotism or a “good ole boys” network is especially problematic when the authority and power of a badge are involved.

When asked how he would recommend the church engage with this issue, from his perspective as a former officer, Bourez says it helps to start with understanding. As a white man in America, Bourez has had one sort of experience. He acknowledges that some Black individuals have had a different experience. So, he has taken time to listen to African American pastors and leaders talk about their lived experiences with police. “While I can never fully be in their shoes, I can hear the reality of racism and their experience with law enforcement. It’s eye-opening.”

One of the folks Darian has listened to is Pastor Paul Binion from Westside Church of God in Fresno, California. Paul describes himself as a “hood pastor,” saying the church, where he has served for forty-four years, is located in a part of town where people struggle and where there is poverty. He says of the police in their community, “They’re there because they want to be. Most are good people,” while echoing Bourez’s sentiment that no profession is perfect.

Rev. Dr. Binion uses his leadership role at Westside and in Fresno to build partnerships with local law enforcement officers. He’s intentionally developed relationships with the captains of the various police districts around the city. Officers come to block parties hosted by a faith-based collaborative which allows the officers time out of their vehicles to relate to the public when there’s no crisis.

For Dr. Binion, “biblical justice” is a real and pivotal concept. “The Bible is filled with encouragement to seek justice and righteousness—Scripture validates that behavior.” Pastor Paul even coordinated a “Justice Sunday” where 100 pastors preached on Micah 6:8 (“…[A]nd what does the LORD require of you but to do justice, and to love kindness, and to walk humbly with your God?” NRSV) on the same day. He is also part of a group of 200 pastors who meet regularly to pray for their community. “We don’t agree about everything. We have to work at the relationships. But we all have the same focus on Jesus as Lord.”

Both Pastor Binion and Pastor Bourez emphasized the need for community engagement to help overcome the recent tragedies. Darian hopes the church will step up and support their local law enforcement officers with mental health services. He says officers “have to be protective of their emotions because of the job.” He continues, “Our emotions are in a hard steel case which looks fine from the outside, but erodes from within. As we are called to step into people’s worst moments, we need law enforcement officers at their mental and emotional best.” And he believes the church is in a prime position to help on that front.

Paul has invested all of his forty-four years of ministry in advocating to the city on behalf of his community. And Westside puts action with that advocacy. They’ve offered flu shots, COVID testing, Thanksgiving meals, a blood drive, a first-time home-buyers workshop, and countless other community-building events, making their church “the place where people come.” Paul also invests in time, prayer, and relationships with the officers in his community so they can be partners in caring for the people in their community.

As members of the body of Christ lean into difficult conversations like the ones surrounding race and policing, may we follow these examples of listening well, advocating for our communities, and pursing the call to act justly, to love kindness, and to walk humbly with God.

Jaymie Dieterle is the administrative assistant for the School of Theology and Christian Ministry at Anderson University, as well as a freelance writer with a passion for books, reading, and life-long learning. Jaymie has written adult Sunday School curriculum, devotionals, and a Bible study for Warner Press/Warner Christian Resources. Jaymie and her family live in Anderson, Indiana, and they are actively involved at Madison Park Church of God. 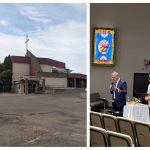 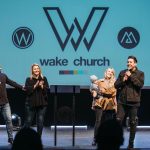