By chogministries
Posted July 16, 2022
In All Church of God, Central, CHOG
Language of the Soul: Jean Shackleton’s Ministry Still Tuning Hearts to Worship2022-07-162022-07-16https://www.jesusisthesubject.org/wp-content/uploads/2016/07/ChogLogo-Light.svgChurch of God Ministrieshttps://www.jesusisthesubject.org/wp-content/uploads/2022/07/jean_shackleton_collage_adj.jpg200px200px

“David and the chiefs of the service also set apart for the service the sons of Asaph, and of Heman, and of Jeduthun, who prophesied with lyres, with harps, and with cymbals.” It’s not very hard to spot those among us whose musical artistry vividly proclaims God’s message for the hour, not unlike those set apart for service as described in 1 Chronicles 25:1 (ESV). Jean Shackleton is one such treasure in the Church of God movement, whose spiritual gift of creative communication has edified the body for a generation. Marrying into a family of musicians who also left their mark on the Church of God, Jean Helbling came from a line of outstanding artists herself, ultimately adding talent to the movement among not only her descendants, but also scores of students along the way. Still tickling the ivories at every opportunity, her tempo slows temporarily to take a look back at the way the Church of God has formed her heart.

“I grew up in a pastor’s home, myself,” Jean recalls. “I remember hearing a lot about salvation and the second work of grace. The fact that everyone who’s born again is in the church of God—many denominations I’ve been acquainted with over the years kind of look shocked when I tell them, ‘You’re a part of us!’ And, of course, I’ve enjoyed the music over the years!”

Jean mentions several familiar names: the CBH Quartet, the Patty family, Dean Shield, the Anderson College Choralaires, and others. But it wasn’t just music that inspired her family; the preaching voice of Dale Oldham was a regular reverberation from the radio in her home growing up. Ella Cleveland, Jean’s aunt, became a familiar sound, as well as Fred Shackleton, who would one day become her father-in-law. 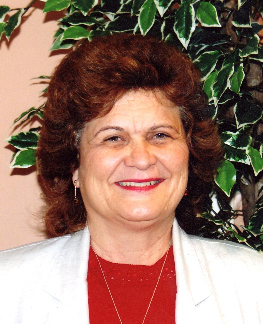 If you’re familiar with Church of God heritage music, you know that the movement is known for tunes that became popular well after the era of pioneer contributors like Charles W. Naylor, Andrew L. Byers, and Barney E. Warren—to name a few. You know that names like William J. Gaither, J. S. May, Ray McCutcheon, Lloyd Larson, Ernie Gross, and others began to have their songs featured in Church of God hymnals in the decades that followed the earliest years. Frederick G. Shackleton was another one of those names. “Together We Go to Make Disciples,” written in 1948, was commissioned for “Mid-Century Advance,” a church-wide emphasis on evangelism. “Jesus Christ is Lord” was commissioned for the International Youth Convention, also in 1948. When church leadership and convention organizers come to you to write the official theme song, you consider it a great honor! And Jean Shackleton is deeply honored to be part of a family with a rich heritage like that.

But she is certainly, in her own right, more than qualified. Jean Shackleton completed her undergraduate work at Azusa Pacific University and earned her master of music in piano performance at the University of Southern California in 1972. She’s a member of the Music Teachers National Association and National Piano Guild, and often judges for each of these. Jean was elected to Who’s Who Among Musicians International in 1974. She was a featured piano soloist and member of the Lodi Symphony Orchestra.

Not only that, but Jean is also the piano arranger for Jan Schmidt on six editions of the vocal book Basics of Singing and recorded all the book’s accompaniments. For twenty years, she was head of the piano department at Mid-America Christian University in Oklahoma City. Jean still serves as adjunct faculty for Oklahoma City University, where she accompanies two choirs and teaches an accompanying class for piano majors. She also accompanies at Southern Nazarene University and has accompanied for Heritage Hymn Sings held at the Church of God Convention. To top it all off, she maintains a private piano studio. 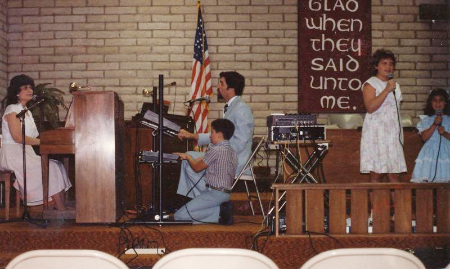 “I started playing piano when I was three, but playing by ear,” Jean recounts. My older sister Ruth Ann was taking piano lessons. I would just play out of her books, and my mother could tell I was not playing the notes. So, when I got to be six years old, she said we’ll get the teacher started working with you!”

The Church of God is surely grateful for that piano teacher. In the years since, churches from coast to coast have been blessed directly by the traveling ministry of the Shackleton family—in addition to the local churches where Jean’s late husband Martin served as minister of music. Though the family doesn’t travel together like they once did, the blessings continue as all Jean’s children continue to serve in some capacity of music ministry.

“Music’s always been big part of my life since the beginning,” Jean explains. “My sister Ruth Ann Yerden and I have been doing concerts together since 1974. We played a few times at Park Place Church of God during Anderson Camp Meeting. We’ve had a life of traveling and doing concerts around the United States, and even Mexico.” 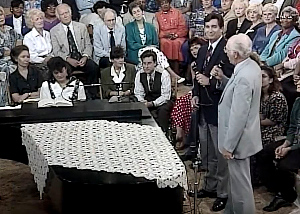 Jean accompanies Martin and Fred for the 1994 Joy in the Lord video.

These weren’t just musical performances. They were prophetic proclamations of gospel truth, and Jean would have it no other way. It’s no wonder she recently got ordained in “music evangelism” for the Church of God. Looking back, she remembers feeling the call to ministry and living it out, but never pursued ordination until a few years ago. Her life’s story is nevertheless one of influential ministry, speaking volumes through music, across language barriers, about who Christ is. Speaking of Mexico, she recalls, “Martin and I took a youth choir there, and the only way we could do a concert is if we advertised it as a classical concert. We had Ruth Ann and Frank along with us, and I would do a couple duets with her, then sneak the youth choir in at colleges in Mexico. The kids really enjoyed that, and they passed out tracts to the people. A lot of people became Christians who came to the concerts, even our bus driver!”

In recent years, Jean’s travel has slowed, but her ministry has never waned. Not only does she continue to spend many hours in teaching and adjudication in music education, but she also records and hosts occasional concerts. Facebook has even proved a providential venue for getting her music out there; as a result of public interest on social media, she has recorded piano CDs containing more than fifty songs each—one, an album of classic hymns, another of hymns specific to the Church of God movement’s heritage.

Thank you, Rev. Jean Shackleton, for blessing the Church of God with your music ministry!

Feature (top) collage: The late Martin Shackleton (left) stands with his wife Jean; Jean is “in her element” when at the piano! 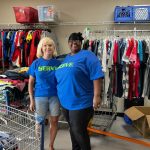 Abundance of Love Fuels Summer of Service to Kentucky CountyAll Church of God, Change the Story, CHOG, Southeast, The Way 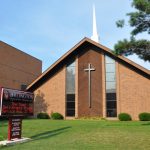