By chogministries
Posted May 31, 2012
In All Church of God, NAC: North American Convention
Kid’s Place: Building Leaders for God’s Kingdom2012-05-312020-02-29https://www.jesusisthesubject.org/wp-content/uploads/2016/07/ChogLogo-Light.svgChurch of God Ministrieshttps://www.jesusisthesubject.org/wp-content/uploads/2016/07/ChogLogo-Light.svg200px200px 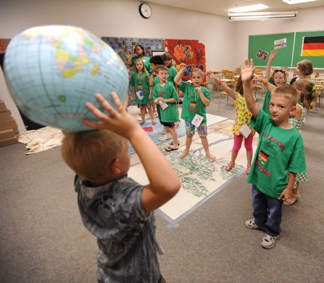 Editor’s Note: In 2013, the Church of God will come together for the Global Gathering, but Kid’s Place will return in 2014 at the next North American Convention. Here are just a few of the many testimonies that prove what a significant role Kid’s Place has had in raising mission-focused leaders.

What would North American Convention be without the sight of moms and dads walking their children in the early morning to attend Kid’s Place or the brightly colored T-shirts, new and old, worn by the youngsters and the oldsters announcing the fact that they had attended Kid’s Place through the years? Kid’s Place is so much more than a place for the children to go while their parents attend NAC conferences—it is an ongoing training camp that transports the children to places around the world and introduces them to missionaries and their cultures. It is a place where leaders are developed, where children truly learn about missions, and a place that they want to visit year after year. When they have become too old to attend the classes, they beg to become family leaders or assistants in some area of the program. From there, they become Kid’s Place directors, leaders, planners, church workers, church leaders, and missionaries!

Briggette Beggs, from Findlay, Ohio, is one of those Kid’s Place attendees (“from the time I could go until the time I couldn’t”) and subsequent emerging leaders and potential missionaries. She is a sophomore in high school, a student leader in her youth group, and one of many who will attend the International Youth Convention (IYC) this summer. She came to the Global Missions office this spring to shadow our staff, to talk with missionaries, and to learn more about the life of a missionary. She shared with the staff that she had felt called to be a missionary in eighth grade. When asked specifically about what had influenced her calling, she listed her grandparents, who were missionaries; Kid’s Place; IYC; the commissioning service at NAC (“seeing all the missionaries and the flags was really cool”); and a young missionary, Abby Smith, who is serving the Church of God in Colombia. She spoke of the time she heard Abby speak at Stonebridge and the “stuff” Abby presented inspired her to consider missions as her life work. She hopes to intern with Abby in the future to discover if that’s what she wants to do with her life.

Abby also traces her initial interest in missions to her years in Kid’s Place. “Yes, Kid’s Place definitely had an impact on my heart for missions, giving me an interest in other countries and cultures from a very young age. My very first Kid’s Place was in 1992, the year I had finished first grade. We traveled to Egypt and Lebanon, and to this day I still remember, more or less, how to say, in Arabic, ‘Couscous with sugar, please.’ It was fun trying something new, and I still enjoy buying and eating couscous from time to time.

“When I got to middle school and high school, I wanted to continue to be a part of Kid’s Place, even though I was too old to attend. I worked one year as a helper and then got the opportunity to be a family leader when I was still only about thirteen. I really appreciate the Kid’s Place leadership 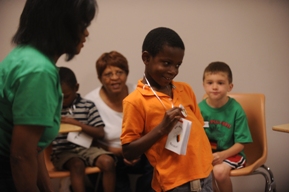 team giving me that opportunity to develop some skills in children’s ministry and to continue to develop a heart for God’s work in other nations. One of the years I worked at Kid’s Place we traveled to the Southern Cone of South America, something that has become even more meaningful to me now that I have had the opportunity to actually travel to the Southern Cone. I enjoyed having the chance to interact with missionaries, including the elder Kurrles and the Millers, people I have gotten to know even more now through my own ministry.

“A very special moment for me came in 2009 when I had the chance to visit Kid’s Place as a newly commissioned missionary. It was kind of strange but also exciting for me to learn that there was actually a “Smith family” named for me, and I had a lot of fun going to visit them. I felt like my experience with Kid’s Place had come full circle, bringing me back as an adult and a missionary to a place that had played an important role in the formation of my heart and my interest in God’s work around the world. I loved having the opportunity to interact with the kids and to encourage them in their own interest in missions.”

Another emerging leader is twenty-two-year-old Jo Ann Tilley, who is currently attending medical school in Virginia, preparing to enter full time medical missionary work. She shared that at age five, before she had ever attended Kid’s Place, she had had a conversation with God and felt very strongly that he wanted her to be a missionary. She recalls that in Kid’s Place, they once studied the 1040 Window and she was shocked about the number of people who had not heard about God. Kid’s Place—studying cultural things about different countries—confirmed her calling, and she became excited about what she could be doing. She recalls following Cheryl and Bernie Barton around when they were at Kid’s Place, and when they visited her home church, she was more influenced by their stories. When she was seven years old and had studied Thailand at Kid’s Place, she went home to her church and gave a presentation about what she had learned.

Colleen Stevenson, missionary to Uganda recalls: “Kid’s Place has been part of our children’s lives as well as ours since we began in missions many years ago in the mid-1980s. One of my favorite memories is when we were at NAC with Rev. Moses Abasoola; we were part of the activities in the classroom, giving out stamps in the passports of the kids who were coming to show that they had been in so many different countries. We had a blast talking to the kids, and Tim and Moses stamped hands. We also had time to talk to them about what we do as missionaries in East and Central Africa.”

Kay Critser shares: “I just read in my pedagogy class that when children are doing something with what they have been taught they will remember 90 percent of it. That is what Kid’s Place has been for the children who have passed through it in the years since its inception. One of those products of Kid’s Place is Michelle Parker, current director; she is a lover of missions and children here at NAC and in her home church and state.”

Through the years, Kid’s Place stories and activities have remained in the hearts of thousands of children—hearts that are ripe for a call to service. Emerging leaders, future missionaries—no better place to develop them than at Kid’s Place.

Vivian Atkins is the Kid’s Place liaison for Global Missions. In thirty years of teaching, she developed a love for education and nurturing children. Since retiring more than ten years ago, she has served as an administrative assistant at Church of God Ministries. For more information about NAC 2012, visit www.chog.org/NAC, or call 800-848-2464 ext. 2130.