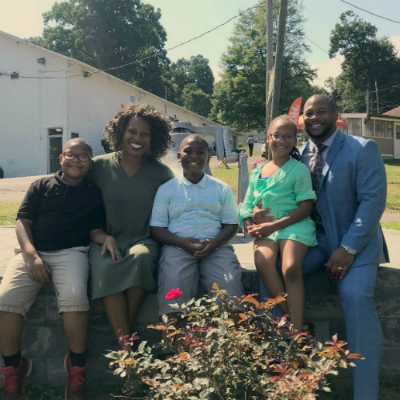 Much of the Movement knows Kevin Earley. He’s served as senior pastor for the past nine years at the church in Detroit founded by Dr. James Earl Massey. For the past three years, he’s served as the president of the National Inspirational Youth Convention (NIYC). He serves on the board of directors for Anderson University, and he authored the book Every-Member Ministry: Spiritual Gifts and God’s Design for Service, a valuable church resource published by Warner Press in 2013. But many may not know the story behind Kevin’s call to ministry and the journey that brought him to such positions of widespread influence in the Movement today.

Kevin Earley accepted Jesus Christ at the age of nine. But his ultimate acceptance of vocational ministry seemed to come in phases. His college career began at Illinois State University, where he intended on securing the necessary education to become a psychiatrist. Though his major was psychology, he sought a minor in religion. That’s because he thought he might become a pastor. While interviewing for an internship at a bank the summer before his freshman year, his attention gravitated toward the role of his interviewer, however. What about human resources? he thought, as he pondered the possibilities that could follow. After being accepted for the position, he determined to switch departments upon his return home for winter break.

“From my first winter break through the rest of college, I spent every summer and winter as a human resource intern,” Kevin recounts. “During my second year in school, I switched my major to human resource management. My new plan was to go into human resources at the bank after graduation, preach as an associate minister, and them become a senior pastor once I retired.”

But God had other plans. “During my junior year in college, the Lord impressed upon me that spending my life in the banking industry would be a waste of precious time. I accepted the call to prepare for full-time ministry and began to explore seminaries.”

Born and raised in the Church of God, Kevin found his way to Anderson and the School of Theology. Though he would have never expected a groundbreaking book to come out of his time there, he did recognize an opportunity to make an impact on the practical functionality of the congregation he was now helping to shepherd. 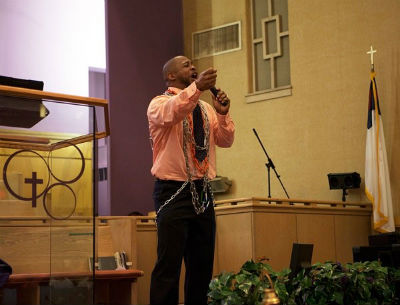 “At Anderson University School of Theology, our dissertations had to address a real-life issue we faced in our congregation,” Kevin explains. “As an associate pastor, I discovered that a small amount of people at Metropolitan Church of God carried the majority of the ministry load. In the process of contemplating the issue and completing my regular doctoral course work, I discovered the priesthood of all believers. Although I grew up in the church and graduated from seminary, this concept had not stood out to me until then. The idea that every believer is a minister, and has a ministry, excited me. As a seventeen-year-old, I was tasked with recruiting and hiring the right people to be bank tellers, accountants, and interns; consequently, my passion naturally overflowed when I discovered that my biblical role as a pastor was similarly to recruit, train, and motivate other people to minister in their proper roles.”

Pastor Kevin’s journey had come full circle. His call to ministry wasn’t conventional, but each step of the way prepared him for the unique niche God had called him to address. His experience growing up in the Church of God, pursuing education at Anderson, and riding the waves of the divine call which led him to the pulpit at Metropolitan Church of God in Detroit, all worked together to position him well to lead the NIYC.

“I have served on the NIYC staff for more than fifteen years,” Kevin recounts. “The 2018 convention will be my third as president. I grew up going to the NIYC and it played a profound role in my Christian and personal formation.”

When he speaks at the final two Church of God Regional Conventions this year in Fairfax, Virginia (September 18–19), and Safety Harbor, Florida (September 25–26), he brings all these experiences, including his successful ministry at Metropolitan Church of God in Detroit, Michigan, to the platform.

“I feel blessed to serve this congregation because they have a heart for one another and the community,” Kevin reflects. “Our members are very willing to help people in need.” 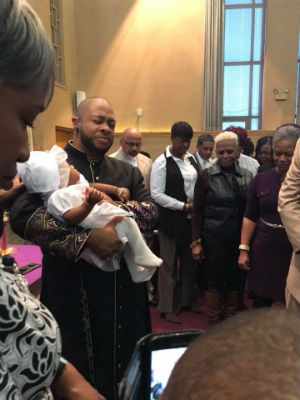 Pastor Kevin during a baby dedication at church.

One example of their heartfelt work among those in need is their partnership with one of the local elementary schools. Volunteers from the church greet students and parents dropping off kids every Thursday, regardless of the weather. The church has offered the school mentoring, classes about Internet safety, and has prayed with and for school staff. Volunteers read with children on a weekly basis, and the church established a program designed to include fathers and father figures in the lives of students.

“Three times a year, we have a Dad’s Day, having as many as ninety fathers, grandfathers, and father figures show up and spend a day with their student in school,” Kevin explains. “We have also enhanced the sense of community at the school by having a ‘dads versus dads’ basketball game.”

Innovation. Fresh ideas. Heart for the church and community. That’s Kevin Earley, and you can hear him in Fairfax, Virginia, and/or Safety Harbor, Florida. “I count it an honor to speak at the last two Regional Conventions,” Kevin says. “As always, I pray the listeners leave having felt like they have heard a word directly from God.”

From the Archives: God is an Equal Opportunity EmployerAll Church of God
When Jim Lyon Invites You on a Mission TripAll Church of God, CHOG TraffickLight, Global Strategy, Southeast