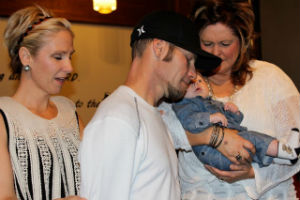 “Religion that is pure and undefiled before God, the Father, is this: to care for orphans and widows in their distress, and to keep oneself unstained by the world.”—James 1:27 NRSV

On the first Sunday of December, CrossRoads Community Church of God in Elizabethtown, Kentucky held a special celebration service to celebrate adoption into God’s family and, at the same time, raise awareness for the orphaned. What originally began as an idea to share the story of a couple in the congregation who had adopted a child from Ethiopia, turned into a large-scale event involving many families. “We realized that we also had a couple that was adopting a newborn from a birth mother in Florida,” Pastor Ed Shonkwiler explains, “and another couple who are foster parents with five natural born children and six who are in the foster-care system. So we decided to take each of their stories and share them with the congregation.”

Shonkwiler arranged the worship service to stress the adoption theme. A special video presentation highlighted the stories of each of the families who had been involved in the adoption or foster-care process. Shonkwiler’s sermon touched on adoption into God’s family. “That morning we talked about how adoption was God’s original thought and that we can only understand horizontal adoption [of children in our society] after we realize that adoption was first vertical. We shared that in Christ we have a new relationship, a new position, a new family, and we are surrounded by God’s love.” 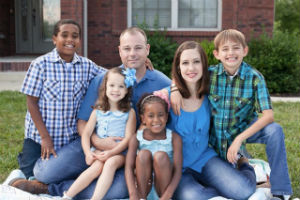 The service concluded with a baby (child) dedication of three children who had been adopted. “At CrossRoads, we believe that children are the heartbeat of all we do,” Shonkwiler explains. “Our vision is to not to leave an inheritance to our children but to leave a legacy in them. We make baby dedications a big deal. We involve the family and the congregation. We actually want the parents to know the dedication is more about them dedicating themselves to raising the child and the congregation is there to come alongside the parents.”

After the service, the church rejoiced to learn that many others among them had been adopted, had adopted others, were foster parents, or had come from foster care. Another individual shared that she has cared for children from all over the world as a host of foreign exchange students. “One special moment of the morning was when each of the adopting couples realized that the same case worker had helped each of them.”

Adoption Sunday was an overwhelming success. Its ripple effects continue to have an impact on a ministry that deliberately emphasizes children. “We know that if we can provide a loving environment for the children, the parents will be more comfortable and more likely to come back. I believe that people are attracted to CrossRoads because there is a family atmosphere. There are many other reasons, but I believe that one reason people continue to come is because we continue to tell them that they are ‘the one God loves’ and that we all are just a ‘bunch of misfits, who found other misfits, who found the Peace that made us all fit!’”