By chogministries
Posted December 19, 2018
In All Church of God, Central
Kansas Congregation Leads Effort to Unite Local Churches for Community2018-12-192018-12-19https://www.jesusisthesubject.org/wp-content/uploads/2016/07/ChogLogo-Light.svgChurch of God Ministrieshttps://www.jesusisthesubject.org/wp-content/uploads/2016/07/ChogLogo-Light.svg200px200px 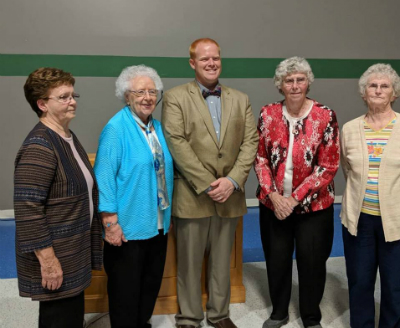 Pastor Clint beams with four church ladies who have been a part of the congregation for over 45 years each.

Newton, Kansas, is home to about 20,000 people. But it’s also home to more than fifty churches! If everyone in town attended church and each church had an equal number of people, you’d have four hundred people in each church. But that’s not the case at all. Instead, most of the churches are small, and much of the population of Newton is still unreached. Not unlike towns and cities across North America, Newton’s churches and ministers had little or no connection with one another. Sure, there was a ministerial assembly, but “Kingdom-of-God unity,” as Pastor Clint McBroom puts it, simply wasn’t happening. He and the congregation of First Church of God decided something had to change.

At the Church of God Convention 2014, much of the movement, including Clint McBroom, first heard the concept of taking back what hell has stolen. He’d been serving as an interim pastor for First Church of God in Newton, Kansas, and, as he was installed to shepherd the flock full-time, this idea resonated deeply. “What has hell stolen from our church?” he thought. “What has hell stolen from our community?” It didn’t take long for Clint to notice that, besides some of the common maladies that face communities across the nation, such as drug and alcohol abuse, there was something troubling about the church—as a whole—of Newton, Kansas.

“We were known as having a lot of churches,” Clint explains. “From my perspective, it seemed that hell had stolen the unity of the pastors.”

Clint immediately got involved in the local ministerial alliance. He couldn’t help but encourage his fellow pastors to consciously view one another as brothers and sisters, not just as pastors of various churches. He understood that most of the Newton ministers had a conceptual grasp of the “family” theology of the church, but that a disparity existed between belief and practice. 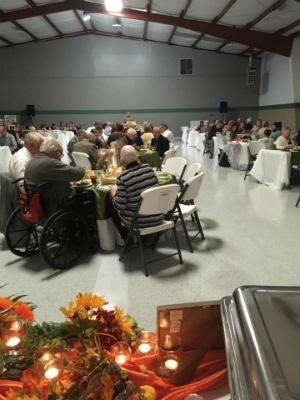 “We started placing emphasis on community worship services, like on Good Friday, for instance,” Clint recalls. “We started a community-wide prayer initiative and were very purposeful in our planning. Whichever church hosted the event that month was not allowed to be involved in the service itself. As I explained the idea to the other ministers, this was so it would never look like the initiative was just one church doing it all. So, we hosted the first one. Another pastor and worship team led. I sat in the back and ran the sound booth!”

Clint says that one of the next churches to host the gathering was a Baptist church whose pastor had never been involved in ministerial alliance activities. Unity began to be more than theoretical across the community. Jesus, not denominational differences, is the subject when these pastors and their congregations come together. They’re recognizing that they’re not in competition with one another, and Newton and the surrounding area is their common mission field. This was especially clear when the mass shooting took place in Heston, Kansas, in 2016.

“We’re in Harvey County, the third or fourth largest county in the state,” Clint explains. “With the alliance, we were able to reach out to the outlying communities in our county and invite them to be a part. The shooting took place only about ten minutes to the north in a town with only four churches and no ministerial alliance of their own. We sent pastors up there to help counsel people in that difficult time. We had no particular vested interest in Heston, but we do have a vested interest in the kingdom of God!”

Clint recognizes the grim reality that churches all around are seeing a decline in attendance. There’s no time for squabbling over matters that don’t ultimately matter. “Our church is not the subject,” he reflects. “Our programming isn’t the subject and our unity gatherings aren’t even the subject. Jesus is the subject. He’s the reason we’re here. We want to see all our churches succeed.”

The year 2018 was special for First Church of God. Celebrating their centennial was no small deal, as festivities and activities to mark the occasion looked back over a storied history and gave tribute to a God who is always doing something new. Improvements to the property have been made by the funding of very generous parishioners, but what Pastor Clint really celebrates is what God is doing through the congregation for the advancement of the kingdom. One of the church’s regular outreach events is called “Movies on the Lawn,” at which concessions are offered and families from near and far come to enjoy quality entertainment. Now the church is becoming known in many circles as “the church that shows movies”—and for First Church, that’s not a bad thing at all.

“We’re on the non-growing part of Newton,” Clint reflects. “Businesses have closed down but, as I’ve assured the church, God put us here for a reason. I wasn’t here when they built the new building at this site sixty years ago, but God’s plan hasn’t changed for us. My prayer for us is that we would continue to recognize how and where the Lord would have us be his hands and feet.”

In Kansas, across North America, and around the world, the Church of God is taking back what hell has stolen. Join the movement. Give life. Donate today at give.jesusisthesubject.org.