By chogministries
Posted June 28, 2017
In All Church of God
Just the Beginning: Convention 2017 Charts Course for Long-Term Kingdom Impact2017-06-282017-06-28https://www.jesusisthesubject.org/wp-content/uploads/2016/07/ChogLogo-Light.svgChurch of God Ministrieshttps://www.jesusisthesubject.org/wp-content/uploads/2016/07/ChogLogo-Light.svg200px200px 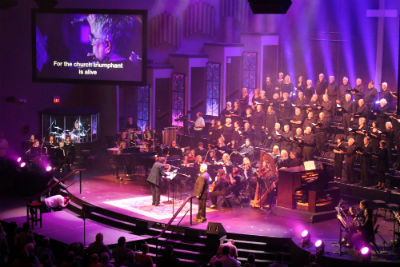 Photo: “For the church triumphant is alive and well…”

Trafficklight 2.0, set to advance freedom around the world over the next two years. Partnerships between Children of Promise, Warner Press, and Stephen Arterburn, created to protect the lives of children and touch the hearts of men and women. New missionaries commissioned, called by God to go to communities both domestic and international with the hope of Jesus. A lineup of speakers, illuminating God’s Word for such a time as this. The CARE Seminar, connecting our pastors and churches with an initiative designed to strengthen the financial health and spiritual vitality of the shepherds of our movement. Pastors young and old, ready to join the movement with renewed hope and enthusiasm for the direction we’re headed. The voice of the General Assembly, heard crying out against a historical culture of oppression, supporting a unified credentialing process, and affirming the need for a movement-wide structural review. And so much more. This was Church of God Convention 2017, and this was just the beginning.

The third full week of June came and went, but the impact of what took place at Central Community Church in Wichita, Kansas, will be felt for years to come. Feedback on social media suggests that those who made the trek to Wichita were not only glad they did, but also changed because they did. As Twitter user @joylsherman wrote, “God spoke. Relationships renewed. Friends developed. Spirit challenged. Rich worship. Diversity displayed. Unity affirmed.” Echoing the refrain of numerous social media comments, Twitter user @DownstreetChris came away with both a readiness to “fight for what hell has stolen” and a “sense of unity and hope for a bright future.” 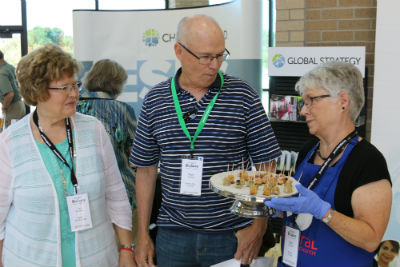 Photo: One of 300 Central Community volunteers being a blessing!

Even those relatively new to the Church of God movement couldn’t contain their joy. Brandon and Cricket Evans, a young pastor couple from the Church of God in Palmer, Alaska, haven’t been a part of the movement but for a little over a year-and-a-half. Citing the Church of God focus on Jesus, our historical emphasis on unity, and our top-notch leadership today, Brandon Evans blogged, “When other churches, movements, and denominations are getting sucked into making their focus modern issues, hyper-experiences, the fight against hyper-experience, and politics, the [Church of God] continues to focus on the true change agent: Jesus.” Thankful for the “incredible time of fellowship…communing with the Lord and being fed by him…,” Brandon has emphatically concluded, “This movement is probably the coolest thing I have ever been a part of.”

Maximum kingdom impact happens when the subject isn’t politics, my church versus your church, or even our history. It happens when Jesus is the subject, as Brandon insists. Over the past few years, the movement has coalesced around this message, which has become far more than a tagline. “Jesus is the subject” has informed the way we do ministry and has given us a new spring in our step. Nowhere has this transformation been more on display than at CHOG Convention 2017, as stories of local church revitalization could be heard in the hallways, and collective wins were celebrated in the sanctuary. The interest in this bright new day may have led to the standing-room only crowd at the Town Hall meeting with Jim Lyon, before the convention officially began. As the partition between two rooms was opened to allow for more seating, the space and time proved to be a moment not of fear for the future, but of optimism and goodwill. 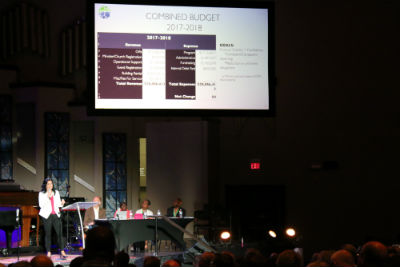 From the three hundred Central Community Church volunteers, whose matchless hospitality set the tone for the week, to the increasingly broad spectrum of age, ethnicity, and geography represented at the General Assembly, it was clear before the convention kicked off with the Gaither Vocal Band that this was going to be an event like none before. Speaking of unprecedented, did anyone notice the array of outstanding women leadership highlighted this year? Consider the following: Church of God Ministries’ Natalie Farmer, who explained the budget in accessible-yet-informative terms; Diana Swoope, who chaired the General Assembly with grace and finesse; Ann Smith and Danielle Strickland, who communicated rich wisdom and truth from the platform; Anita Renfroe, who lifted the soul with love and laughter; and Sarah Scharbrough McLaughlin, who led us to the throne in worship. We are so blessed, as Gaither put it many years ago.

Interspersed between compelling messages by Paul Sheppard, Allan Fuller, Geremy Dixon, Nick Vujicic, Ann Smith, Danielle Strickland, and Mike Fackler were multiple memorable moments. The gathered saints rose to their feet to welcome Samuel George and the 75,000 believers from Pakistan to the Church of God movement. A standing ovation was given in honor of Ronald V. Duncan, along with his wife Martha, as he was officially recognized as general director emeritus. Hands and voices were not only lifted heavenward during worship led by Sarah Scharbrough McLaughlin, but also by the multitalented George Skramstad and the Central Community Church choir and orchestra. In celebration of Children of Promise’s 25th anniversary as the child sponsorship ministry of the Church of God, we celebrated the beautiful story of Jewel Leodones—a sponsored child from the Philippines who has grown to be a light for Christ in church and society. As Ann Smith prepared to exit the platform, former missionary David Reames joined Jim Lyon to publicly lead a prayer of thanksgiving for the gift that she has been to the movement across the generations. A little-known fact: at the conclusion of Nick Vujicic’s message on Wednesday evening, one pastor led his son to Christ! Then there were the variety of extra events that took place before, during, and after the convention, each making a valuable deposit in the lives of those who attended. 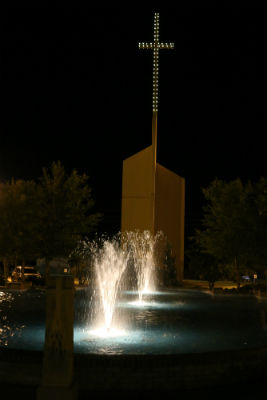 After all was said and done, we realize that Church of God Convention 2017 really isn’t done. The ripple effects continue, and the full impact may not be known for some time. One thing cannot be disputed—Church of God people went away recharged, full, and encouraged to take back what hell has stolen in their communities. Or as Twitter user @noggingrande explained it, “I feel washed out. Cleansed. Like a long, cool drink of living water.”