By chogministries
Posted August 17, 2015
In All Church of God, Central
Joy Comes in the Mourning: Houston Church Finds Hope Amid Loss2015-08-172020-02-29https://www.jesusisthesubject.org/wp-content/uploads/2016/07/ChogLogo-Light.svgChurch of God Ministrieshttps://www.jesusisthesubject.org/wp-content/uploads/2016/07/ChogLogo-Light.svg200px200px 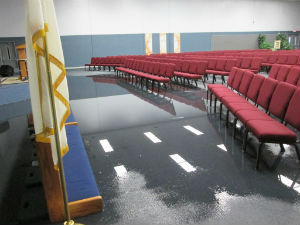 “…The LORD gave and the LORD has taken away. Blessed be the name of the LORD” (Job 1:21 NKJV). Often cited in times of trial or difficulty, these famous words perfectly embody the attitude of Houston First Church of God during the past few months. The trials began with severe flooding in the church, which was due to the heavy rainfall and resulting damaged drainage pipe that burst in the roof above the youth room. Filling the church with one to three inches of standing water, the flood damaged numerous areas of the building and required that much of it be gutted and completely redone (drywall and insulation included).

Then the church was struck again, this time with the traumatic and sudden loss of their lead pastor, John Miller. After suffering a stroke on June 2, Miller passed away a few days later, leaving his congregation behind while he went to be with the Lord.

The quick succession and shock of these ordeals could have easily sent Houston First Church of God into a downward spiral, overwhelming the church family with a troubling time of doubt and questioning. But rather than reject the faith they have nurtured together and turn away from the Lord, the church followed in Job’s footsteps and called on the name of their loving Father, leaning into his embrace and finding peace in his presence.

After speaking with the associate pastor of HFCHOG, Ryan Morris, I am overcome by the gracious and encouraging attitude he and others in the church have adopted towards these stressful events. Upon receiving my inquiries into the church and its story, Pastor Morris responded, “It has been amazing to see God’s faithfulness and goodness through these challenging and difficult last few months. He has given us strength and provision through his Spirit and fellow brothers and sisters.”

When I requested that he share some of John Miller’s testimony with me, Pastor Morris had no end of words to describe Miller’s incredible spirit and heart for the Lord. He said, 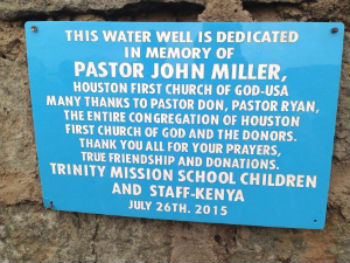 “‘A life with Jesus always ends well.’ That was Pastor John’s closing statement when he preached just a couple weeks before he passed. His life was a testament to that statement. Pastor John put his God first and his family second, with his church family close behind. He spent countless hours serving other people. He genuinely cared, generously gave, and humbly led people to grow closer in their walk with Christ. This was evident in his role with our H.O.P.E. (Helping Ordinary People Extraordinarily) Ministry. Many homeless or low-income families came through our doors for this ministry and found themselves in Pastor John’s office. He would listen to them, pray for them and, when needed, give his time, wisdom and resources to help them. When others would get frustrated or annoyed with certain situations or circumstances brought by this ministry, he would respond with optimism, love, and hope to see people succeed and grow closer to Christ. Really there is not enough time or space to tell of all that Pastor John has done for HFCHOG and even me personally. He truly was an amazing man of God. Though he is no longer with us here on this earth, he has left a great legacy behind.”

Soon after the passing of this godly man, the church’s yearly missions team left for Kenya and began the project for that year, which included digging a well for a local orphanage. Upon completion, the team lovingly dedicated the well to John Miller, honoring the role he played in fundraising for the project, as well as commemorating his diligent and compassionate service to the church.

With renovation projects for the church building underway, and the memory of John Miller forever preserved in the fresh water of the well, the church is steadily making progress towards a newly reborn state. The church has just announced their new lead pastor, and he’s no stranger to the Church of God in Texas—Tim Gould.

“Come and see what God has done: he is awesome in his deeds toward the children of man… we went through fire and through water; yet you have brought us out to a place of abundance” (Ps. 66:5, 10b ESV)