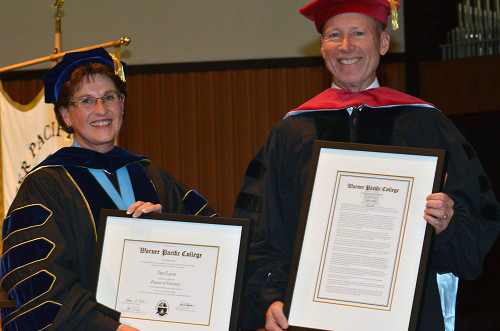 August 29, 2013 – At the Convocation of the 77th academic year, Warner Pacific College was privileged to bestow up Jim Lyon, the Honorary Doctor of Divinity. Lyon is a former student of Warner Pacific and was recently ratified as the general director of Church of God Ministries.

As a pastor and as the host of Viewpoint, a radio ministry of Church of God Ministries, Jim Lyon has distinguished himself as a visionary, a gifted communicator, and a leader in the Church of God in North America and around the world.

Lyon has served in countless civic and community service roles, including an appointment in the Washington State Legislature at the age of 29, making him one of the youngest members to ever represent the 74,000 people of northwest Seattle. Laying aside his political aspirations, Lyon returned to his roots, becoming the pastor of the church in which he was raised.

After 20 years in service to the Fairview Church in Seattle, Jim accepted the call to Madison Park in Anderson (then called North Anderson); where he served as senior pastor until sensing the call to, and being selected for, the position of general director of Church of God Ministries in 2013.

“Jim Lyon is a uniquely gifted leader who is poised to be a driving force in furthering the mission of the Church of God around the globe,” said Dr. Andrea Cook, President of Warner Pacific College. “I am excited to see the powerful ways in which God is using Jim to unite our congregations across North America as we transform culture by being the body of Christ.”

“I am both extremely grateful and deeply humbled to be recognized in this way,” said Jim Lyon. “As an institution, Warner Pacific is on the cutting edge of Christ-centered higher education, raising up new generations of diverse, urban leaders who are serving their communities in truly meaningful ways.”

The honorary degree awarded at Warner Pacific College recognizes merit and excellence. It is given to persons of exemplary character, whose contributions to their field of endeavor, to society at large, to the work of the church, and to the College deserve public attention.