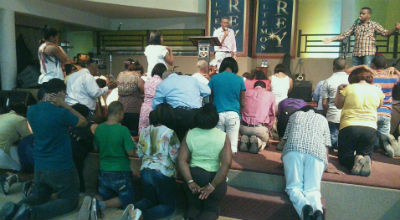 Photo: Prayer at the Church of God where Juan Santos is pastor.

Though some might consider it overused, there’s likely no better word to describe what’s happening today among Christians in the Dominican Republic. Revival can be seen breaking out in churches, on street corners, in sports, in the media, and even in politics. Unconcerned with denominational differences and squabbles over style, churches are banding together under one unifying message—Jesus. Church of God pastor Juan Santos recently led his Santo Domingo congregation to participate in a weeklong evangelism initiative, a national effort which resulted in several thousand souls won to Christ. He’s delighted to report on the incredible impact of the experience and reveal insights into the cultural transformation permeating nearly every level of society.

In 2006, the focused push began. It didn’t include events held in stadiums where people gather and a mass invitation is given. This is the church going to where the people are—into homes, hospitals, and even jails. Pretty much any place where people gather became a prime setting for the churches of the Dominican Republic to share the gospel. During the second week of February, this National Evangelism and Discipleship initiative involved the greatest number of believers, across denominational lines, to date. While the actual event is just one week each year, the experience has spilled over into a passion to carry out the Great Commission throughout the year. More than ten years of churches practicing unity with a heart for the lost has had an observable effect on the culture.

“In our community, we face really dark problems together, like crime, alcohol, and homes where the wife is left to raise the children,” Pastor Juan explains. “In many of the single-parent homes, they have a hard time understanding how God could be a loving heavenly father. We have to take the church out of the four walls and accomplish the mission for the Lord. So our church went on prayer walks around the neighborhood on four Tuesday nights leading up to the big week. Then, during the second week of February, our church split into small groups and we sent them out to take the gospel to the streets. Some of those who accepted Christ are already coming to church and we’re meeting with them and praying with them as they grow. We are preaching the gospel and praying for revival to take over the whole country.” 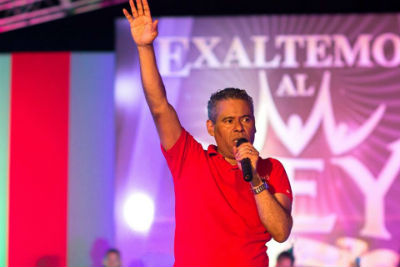 In addition to the fruits of evangelism and discipleship, evidence of the spread of Christianity in the Dominican Republic is showing up among prominent national figures. Sports stars are coming to Christ, several celebrities have made confessions of faith, and the media has shown signs of being more open to faith. Of all the radio stations in the country, the Christian station is now the fourth most-listened-to on the dial. Recently, Pastor Juan began a new daily radio broadcast ministry on that same station. The highest level of government has not been immune to this wave of Christian influence. The president of the Dominican Republic assembled a group of pastors to serve as his prayer team, and Juan Santos is honored to be one of those pastors!

Among the most interesting facts about Pastor Juan is that he’s a former candidate for political office. While he was not elected, the connections he made enabled him to reach hundreds of people for Christ. Looking ahead, there may be even more opportunities for Pastor Juan to influence his community and country for Christ, not only through ministry, but through government, too.

None of this societal transformation would have been possible without the unity of believers. The focus was always on the gospel. The subject was always Jesus Christ. “Jesus is the center,” Pastor Juan explains. “We don’t question your practical technique. We just know that Jesus said go.”

Please pray for the continued advancement of the kingdom in the Dominican Republic, Pastor Juan’s radio ministry, and guidance for opportunities that may come his way. Thank you!

Did you know that A.One.8 will include training experience in the Dominican Republic? Learn more about what students will be doing this summer.

YOU can be a part of what God is doing in the Dominican Republic. Donate online under “Dominican Republic” at http://chogglobal.org/latin-america/. Or, mail your donation to Church of God Ministries, PO Box 2420, Anderson, IN 46018. Be sure to write Project 42.30155 on the memo line. Learn more about Global Strategy at www.chogglobal.org.