Jars for Justice: Missouri Church Champions Cause with Apple Butter

By chogministries
Posted November 17, 2015
In All Church of God, Central
Jars for Justice: Missouri Church Champions Cause with Apple Butter2015-11-172020-02-29https://www.jesusisthesubject.org/wp-content/uploads/2016/07/ChogLogo-Light.svgChurch of God Ministrieshttps://www.jesusisthesubject.org/wp-content/uploads/2016/07/ChogLogo-Light.svg200px200px 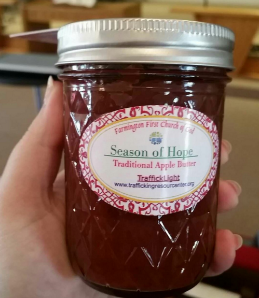 Sometimes the best way to champion a cause is also the sweetest. First Church of God in Farmington, Missouri, wanted to make a difference in the fight against human trafficking, but needed to find a way to avoid breaking the budget. Selling apple butter was their solution. With a little effort, First Church of God is proving that churches of all sizes can do something to advance freedom for the captives.

“If our little bit of money can be used to support this fight, and snatch one child a year out of harm’s way, then it’s all worth it,” Shannon Skinner, pastor of First Church explains. Pastor Shannon was one of thousands who sensed the Holy Spirit’s nudging to get involved with CHOG TraffickLight at the Church of God Convention in Oklahoma City. He explains, “We could pick a lot of different missions. But Jim Lyon inspired us, this is what the Church of God is doing, and we want to help. It’s a great cause to get behind.”

Pastor Shannon senses an urgency in the fight against human trafficking. He can’t help but wonder why so many issues have motivated the church to action for so long, while trafficking has been largely ignored until recently. “We want to fight all these other things,” Shannon says. “Sex trafficking is such a large industry, yet we turn a blind-eye to it.” Shannon is aware of the common misconception that most of those caught up in the sex trade are adults who choose their own destiny. “But that’s just not true,” he says. “These are children who are getting sold for sex. What better cause than to help those who can’t rescue themselves.”

Jessica Herwig is a minister of administration at First Church of God. She’s excited about the apple butter fundraiser because she, too, is excited about what CHOG TraffickLight is doing. “It broke our hearts to think about some 30 million people being enslaved,” she recounts. “We wanted to help, even if our impact would be small. Our church was inspired, and started brainstorming different fundraisers. Everyone in the church helped—from donating supplies and Crock Pots, to making the apple butter and the labels. Every time we sell a jar of apple butter, we also educate others about human trafficking and give some hope.”

With each donation of six dollars or more, a jar of apple butter is given away. With each jar of apple butter given away, the fragrance of home-cooked goodness mixes with the fragrance of hope. “Our theme for this holiday season is ‘Season of Hope,’ Jessica explains. “We want to give hope to the survivors of human trafficking, and help educate the public about it so it doesn’t happen to others. As the saying goes, ‘A thousand-mile journey starts with a single step.’ We stepped out on faith to see where God would take us with this apple butter fundraiser, and we are so excited to see how much we can raise and donate to CHOG TraffickLight!”

First Church is on board with CHOG TraffickLight and Freedom Sunday 2016. Are you? Take action today at www.chogtrafficklight.org/freedom-sunday.