By chogministries
Posted August 20, 2019
In All Church of God, Global Strategy
Japan Celebrates Increasing Number of Women in Ministry2019-08-202019-08-20https://www.jesusisthesubject.org/wp-content/uploads/2016/07/ChogLogo-Light.svgChurch of God Ministrieshttps://www.jesusisthesubject.org/wp-content/uploads/2016/07/ChogLogo-Light.svg200px200px 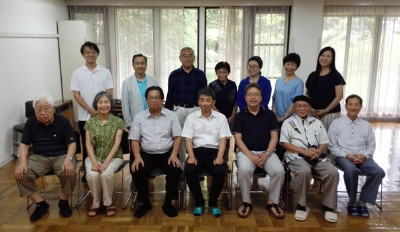 Gathering of pastors in Japan, summer 2019.

So much took place during Convention 2019 and General Assembly, and so much has been said about our experience together in Orlando. In all the recap and review, we certainly don’t want to overlook the international component of this pivotal gathering. Sure, there were 180 guests and a couple speakers from outside the United States and Canada. More missionaries were present than at any convention in recent memory, and a global dialogue brought some exciting new ideas to the fore. But there were testimonies given and stories shared of God at work around the world, too. One was the report of the growing representation of women among clergy in the Church of God in Japan.

Satoru Kanemoto, who serves as president of the Asia-Pacific Church of God Conference, was beaming about what God has done in his region, especially in his home country of Japan. In 2018, he completed a ten-year role as the chairman of the Church of God in Japan, and his love for the Lord and the church is evident. That’s one of the reasons his heart breaks when he sees the underrepresentation of women in ministry among God’s people around the world—even in Japan, where good things are happening on this front.

Out of a total of fourteen Churches of God, four are now pastored by women! Two other Japanese women ministers are also now ordained and serving as associate pastors, in addition to another woman serving as an associate. Beyond that, Global Strategy missionary Christy Van Dam also serves as pastor of a Japan congregation. The ripple effects are tremendous since the Church of God in Japan became the third assembly in the region to ordain women pastors in the Church of God, followed only after the late Rev. Tabita Gunawan of Indonesia and Rev. Dorothy Colney of Myanmar.

“In Japan and in Asia but, in reality, all over the world, it appears to me that the woman’s role and the male’s role are prescribed within the cultural code, enforced by [a particular] theological education,” Kanemoto explains. “In Japan, some women pastors are very influential, but their social status is generally a supportive, as opposed to a leadership, role. For example, one major Japanese seminary has five professors but has never appointed a woman professor, even as they have tried to break down various dividing walls. Therefore, some women preachers must face burdens to break through the current theological paradigm.” 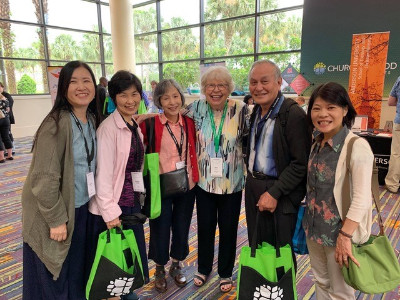 Convention 2019 guests from Japan, plus former missionary Ann Smith (center). The three women on the left are CHOG Japan pastors.

Like it is in the United States and Canada, this isn’t always easy to do. But Kanemoto is very pleased with the steps already taken toward equal opportunity in ministry, even as he has urged the Church of God to make progress in this important area. Perhaps his upbringing in the church shaped his understanding of the uniquely wonderful contribution of women to the kingdom of God. A very young Kanemoto was baptized by a female missionary in Japan. When Kanemoto pursued the call to ministry in the United States, the church he attended was led by four pastors—two co-senior pastors and two “co-junior” pastors; one of each was female. After attending a Christian conference in South Africa and meeting more female leaders of the faith, he came back to the Church of God in Japan with a new commitment to “work for the women’s cause within the Japanese church.” He promptly accepted the lead role of the women’s committee of the Japan Evangelical Association, of which the Church of God is a participant. “As a result of my four-year commitment,” Kanemoto recounts, “the portion of woman delegates, which was less than 10 percent, climbed to over 20 percent.”

Additionally, Kanemoto selected a woman, Rev. Setsuko Mizuno, to the position of vice-chair of the Church of God in Japan.

Surveying the spiritual landscape of the Church of God in Japan, Satoru Kanemoto concludes, “I celebrate that God is active and using the Church of God in Japan in a special way. I thank God that he is active within us so we, together, witness God’s activity in the midst of war and peace. God is asking us to work for the enhancement of women’s roles in the current theological/missiological/ecclesiastical [situation] in Japan, in the Asia-Pacific Church of God Conference, and in the world.”

Learn more about the work of the Church of God in Japan and around the world—make your starting point www.chogglobal.org. There you’ll discover facts, testimonies, and information to help you get involved as the Spirit may lead. Thank you for your prayerful and financial support.