Jamaican Couple Blessed to Be Bold

By chogministries
Posted July 7, 2014
In All Church of God, Be Bold
Jamaican Couple Blessed to Be Bold2014-07-072014-07-07https://www.jesusisthesubject.org/wp-content/uploads/2016/07/ChogLogo-Light.svgChurch of God Ministrieshttps://www.jesusisthesubject.org/wp-content/uploads/2016/07/ChogLogo-Light.svg200px200px 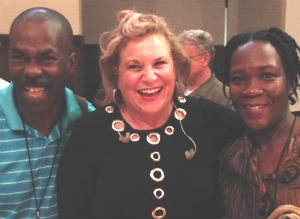 Photo: Stanford (left) and Lorna (right) were excited to see Sandi Patty (center), as well as many others from the Church of God at the convention.

For the Bennetts of Kingston, Jamaica, God just proved once again that he is always on time. Though others may have thought it was difficult to get to Oklahoma City for Church of God Convention 2014, they probably didn’t have to cross as many hurdles as this couple. Stanford and Lorna, leaders in the Mt. Charles Church of God in St. Andrew, desperately wanted to join us in Oklahoma City, and just in the nick of time, God provided a way.

“Sometimes while Stanford was making the calls to try to get us here,” Lorna confesses, “I was thinking, ‘I wouldn’t bother anymore.’” Who could blame her?Multiple obstacles lay between the Bennetts and the convention. The couple had never been to the United States before on a visiting visa. They didn’t have the discretionary income for such a trip, but they knew God’s hand was upon them. They couldn’t make hotel arrangements in the States because they didn’t know if their visa request would be granted. Then God’s plan started to unfold.

“At the last minute, we received our visiting visa,” Stanford explains. “A friend bought us plane tickets. But being so close to the convention, we had not made hotel reservations. I called Church of God Ministries to ask for a recommendation.”

It was after hours, but the answering service relayed his message to the chief operating officer for Church of God Ministries, who was already in Oklahoma City. “They were willing to pay for the transportation, but were needing a place to stay,” he explains. “For the price that they were able to pay, there was nothing left in the area. Everything was booked.” So Church of God Ministries stepped in.

“The important thing is that they were able to make the trip out there,” the COO explains. “We did what we needed to do. We have to be willing to be compassionate and engage the world. We have to be bold. And they were making every effort possible to be a part of this event.”

Stanford and Lorna call their experience nothing short of a miracle. “The theme and the speakers really moved us in a great way,” Stanford reflects. “The experience is like heaven here on earth. Being with the family of God here has made an impact on us. It means we have so much to contribute when we go back to Jamaica. The Lord renewed us, recharged us, and motivated us in the way to go.”

Lorna adds, “Being bold is theoretical, but now that we are here, it’s more practical. No one else from Jamaica was coming, so we could have been discouraged. But boldness brought us here.”

While still in Oklahoma City, the couple put into practice the boldness proclaimed at the convention. “One night we were thinking about getting a ride over to the church from the hotel,” Stanford recalls. “We had been thinking we were going to walk. But I said, ‘You know what? We’re just going to be bold and ask for a ride!’ And from then on, we’ve been offered to be picked up and taken wherever we’ve needed to go!”

Stanford, who can’t wait to share his experience and insight from the
convention, functions as an interim pastor at his home church. He also regularly practices street evangelism, as he has successfully done for seventeen years. As a result of his street ministry, which includes preaching on the bus and on street corners, his ministry has blossomed and brought about noticeable change in the community. But Jesus wasn’t always the subject of his life.

“Well I was planning to go to a dance on one Saturday night,” Stanford recalls. “I was a womanizer, a partier, and I worked as a DJ. I wasn’t planning on getting saved. I didn’t think I could be. I’d just had a beer and had walked out of the bar. And suddenly just something happened, and during that the Spirit of the Lord led me down on my knees. I confessed my sin and accepted the Lord Jesus Christ. People around me thought I’d gone crazy! It just hit me all of a sudden. And the next Sunday I went to the nearest church to be baptized. When I looked in the mirror, I knew it was a total change.”

“And now I’m compelled to tell somebody else,” he continues. “God can change your life! So I started to minister on the street. And I never stopped.”

Step out in faith and be bold, Church of God!