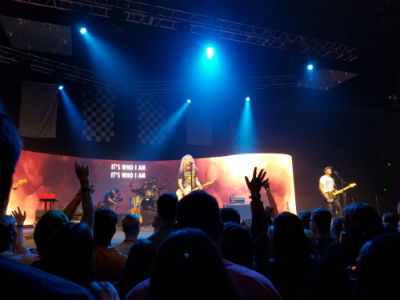 For the first time since 1980, Indianapolis, Indiana, was home to the International Youth Convention of the Church of God. Reflecting the local racing culture, the 51st pinnacle of youth ministry experiences capitalized on its proximity to the iconic motor speedway, with four days designed to put students on track for the race of a lifetime. Inspiring worship, top-notch speakers, dozens of breakout sessions, a 5K to support the fight against trafficking, and a day devoted to community service combined to create moments of lasting life change. Those moments may have passed, but eternity—brighter than ever before—lies ahead. The life change continues as four thousand students and youth leaders, who embraced life at IYC2018, return home to give life to their families, schools, churches, and across their communities. 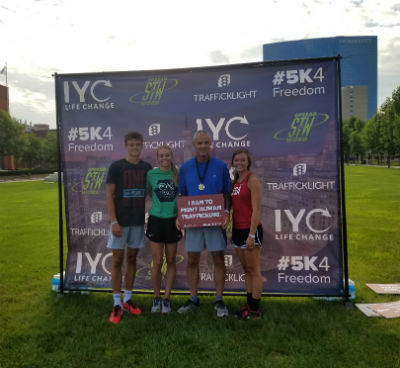 Runners pause to celebrate their completion of the 5K For Freedom!

What would motivate three hundred students to forego sleeping in and instead embark on a five-kilometer race on a sun-scorched, sweltering summer morning in Indianapolis? The 5K was a first for IYC, yet every slot was filled in advance. All enjoyed the camaraderie, some were competitive, but no one was in it for a trophy. There had to be a purpose greater than themselves, and there certainly was. Proceeds from the 5K For Freedom went to support the life-giving fight against human trafficking through CHOG Trafficklight, particularly in one Bangladesh village. Students also gave generously during IYC to Spread the Word in support of Trafficklight.

Can you picture thousands of students walking through downtown Indianapolis without saying a word? It’s hard enough to imagine even one teenager staying silent for long. But that was the scene the final evening of IYC during the Silent Walk, which brought students out of the Indianapolis Convention Center and onto the streets, culminating in Communion at nearby Military Park. Like 1980, IYC made its mark on Indianapolis, but the city does looks quite different than it did then.

“#IYCindy did not disappoint! Most underrated city in the USA,” one Twitter user said about Indianapolis. Upgrades to the downtown area, in particular, have made it ideal for events like IYC. But the fun, food, and fine accommodations weren’t why IYC students wanted to give back. Sure, students and their leaders were grateful for the host city’s hospitality, but these believers were born to serve! Created in Christ Jesus for good works (Ephesians 2:10), they dispersed across the city for a variety of projects far more fulfilling than any video game they could have otherwise been playing, Netflix show they could have been binge-watching, or Snapchat conversation they could have been keeping up with (though IYC did have some great Snapchat filters!). Because of their work, the community enjoyed the product of hours and hours of volunteer labor, including 140,000 meals were packed to combat hunger.

Of course, the Emerging Leaders Gathering was also a sight to behold. Anytime young believers indicate a commitment to Christ-centered leadership, heaven rejoices. Some of these inquired, while at IYC, about the brand-new Student Leadership Focus, a new resource from Church of God Ministries for high school juniors and seniors hearing and responding to the call of God for mission and ministry. “If this generation of the Church of God gets On Track and stays On Track, [imagine] what good can be done!” Jim Lyon, Church of God Ministries general director, tweeted during IYC2018. 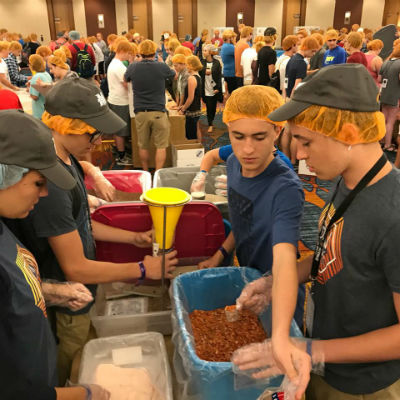 On Track. The theme of IYC2018, based on Hebrews 12:1–3, infused the worship, speaking, conferences, and breakout sessions, each reinforcing God’s itinerary for the race of life. Samuel Rodriguez, Tim Ross, Nick Vujicic, Jim Lyon, and Danielle Strickland preached God’s Word with clarity and conviction, communicating hope while daring students to get on track with faith, purity, joy, and focus. Worship leaders Zealand, Iron Bell Music, David Crowder, and the IYC High School Band set the stage perfectly for the Spirit to move. Adding to the experience were illusionist John Michael Hinton, rapper Kevin Burgess (“KB”), and emcee Jeff Whye. Many will also never forget seeing a young man, who drowned in an icy lake three years ago, walk on stage and share his powerful testimony (the story is set to release in theaters as Breakthrough, Easter 2019). One student’s tweet spoke for many just like it: “God showed up this week and changed so many lives, including mine!”

IYC2020 is scheduled for July 3–6 at the Orlando World Center Marriott in Orlando, Florida. Don’t forget to download the post-IYC2018 devotional! Learn more about the Church of God Youth Ministries at www.chogyouth.org.