IYC2018 On Track to Change Countless Lives for Christ 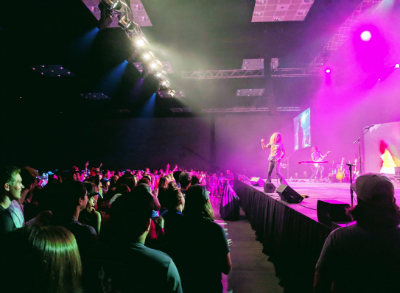 It was the moment everyone was waiting for. The car washes, rummage sales, bake sales, and numerous other fundraisers led up to this single point in time. Students were giddy with excitement as adult leaders breathed a sigh of relief: “We’ve made it—finally!” As the doors were opened into the main hall at the Convention Center in Indianapolis, Indiana, students from across the country and around the world took their seats only briefly before rising to their feet in enthusiastic participation. High-octane worship, engaging emcees, captivating exchanges, and an in-your-face speaker put IYC2018 on track to change countless lives for Christ. And so, it quickly became clear that this wasn’t the culmination of two years of preparation—this was only the beginning of what God has in store.

About half of those traveling to IYC had already arrived on Sunday, and the intense heat and humidity weren’t all that was in the air. A palpable sense of anticipation continued to grow as more and more student ministries groups descended on downtown Indianapolis. Starting with the pre-convention prayer service, and continuing throughout the day, students and leaders alike knew all the prep was worth it. “It’s happening!” First Church of God of East Prairie, Missouri, tweeted. “All the fundraisers, all the time, all the prayer, all the sacrifice is for this moment! Savor it, engage, and experience it!” 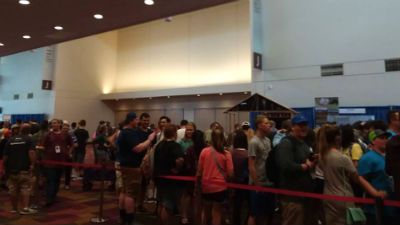 Students wait to walk through the main auditorium doors.

Great advice for the week. Praise God, students and leaders are savoring the experience and engaging with the Spirit and with others. Zealand, a band composed of Phil Joel (formerly from the Newsboys), led worship Monday night with an observable zeal for the Lord. Jim Lyon, Church of God Ministries general director, described the scene perfectly—can you imagine? “Thousands raising the roof with the lyric, ‘You make me new…” For Newsboys fans, Zealand led the crowd in a throwback hit, “He Reigns,” but the overarching theme through the evening was life. Between songs, Phil Joel urged everyone listening to fully embrace the life that Jesus offers. Only then can we truly give life!

After several years off the platform, IYC-favorite and talented emcee Jeff Whye was back. Andy Stephenson, his wife Candace, and their young children offered a warm welcome, as well. Illusionist John Michael Hinton, who would entertain the masses in the late-night venue on Monday, made an early appearance that left eyes wide open and jaws dropped. But these moments—lighthearted and contemplative—only fostered soul connections and opened hearts to receive God’s message for the evening through his servant Samuel Rodriguez.

“When life throws you rocks, build an altar!” he insisted.

“What you can’t shake off, Jesus washes off. His grace is always sufficient,” he declared.

Of course, Samuel Rodriguez had much more to say as he boldly challenged believers within the sound of his voice to take risks, to take courage, and to step out in faith. But, on the topic of faith, many were unprepared for what happened next. 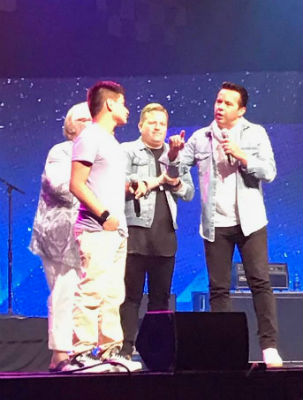 Samuel Rodriguez interviews boy who was raised to life after drowning.

A boy who had drowned in an icy lake walked on stage, alongside his mother. Samuel Rodriguez interviewed the mother and his son, who showed no signs of ever having dealt with such physical trauma. Dead for one hour, his response to why he was still alive today—in front of thousands of teenagers—was that God still had a purpose for him. Needless to say, this was a powerful moment that will be remembered long past IYC2018, as many will head to the theaters to watch the Easter 2019 release of Breakthrough.

Would you continue to cover IYC in prayer this week? Leadership has suggested the following prayer points:

IYC2018 is off to a great start, and is certainly on track to change countless lives for Christ. After life change happens among IYC attendees this week, we can only imagine the number of lives they will touch when they go back home to their churches, schools, and communities. Thank you for your prayers.

Learn more about IYC at www.iyc2018.org.