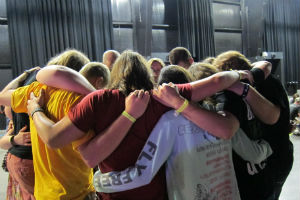 IYC2014 may be history, but the sound of splashing is left in its wake. As nearly five thousand students returned to reality after the early July gathering in Nashville, Tennessee, youth groups from California to Canada and beyond celebrated new commitments to Christ. Baptisteries were filled to the brim as students publicly demonstrated their new life. Since IYC2014, students have been following Jesus in baptism, joining discipleship groups, spending more time with God, and sharing faith with boldness.

Eight out of ten students polled in an unscientific survey following IYC2014 indicated that they had made some kind of spiritual commitment in Nashville. Eight out of ten students also said they’d experienced a more intense personal relationship with Jesus since the convention. The convention, which attracted students from five countries, collected nearly $66,000 for Spread the Word, facilitated the packing of 75,000 meals for Change This World, and sponsored service projects across the city, was an experience that few will forget.

The Holy Spirit won the victory in the hearts of students on several vital fronts. One report, for example, told the story of a friend who had chosen to accompany a student to the convention. This friend had previously attempted suicide on three occasions. In a moment of encouragement and conviction at IYC2014, this friend accepted Jesus as Savior and Lord. This student will never be the same! 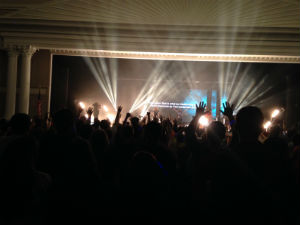 A special gathering for emerging leaders was held early Sunday morning during IYC. This year, more than a thousand students attended, each indicating a divine calling to be a Christ-centered leader. One of these reported, “IYC was a very life-changing experience. I accepted God’s call into children’s ministry on the first night of IYC, July 5, 2014!” Another said, “It wasn’t until this summer at IYC 2014 in Nashville that I discovered exactly what God’s call on my life was. I felt God’s presence in a way that I never had before. God revealed to me that he wanted me to go into full-time youth ministry on the final night of IYC. Since that day I have been spending at least one hour in prayer, and it is already beginning to change my life in some incredible ways!”

One student, who had grown up in the church but was self-conscious about witnessing, submitted the following: “After IYC, I realized that it’s selfish of me not to share with my peers, because God made my life so much better, and I can’t just keep all the goodness to myself…I pray to God more frequently than I ever had, and I got baptized a week after IYC (I was baptized when I was ten, but didn’t really understand what it meant).” In a new expression of boldness, this student committed to bringing a friend to a local camp meeting so that she too might experience life change.

“Be Bold” was the theme for the Church of God Convention in Oklahoma City. But it was clear that the Holy Spirit was building boldness into the hearts of IYC students, as well. “IYC2014 really reopened my eyes to Christ,” one student reported. “God was present that whole weekend, and when it was over, I began to do his work.” This student was not kidding! “I drove around in my car with snacks and drinks, and began talking and praying with everyone I was able to meet.”

Visit www.chogy.org for more information on youth ministries of the Church of God.