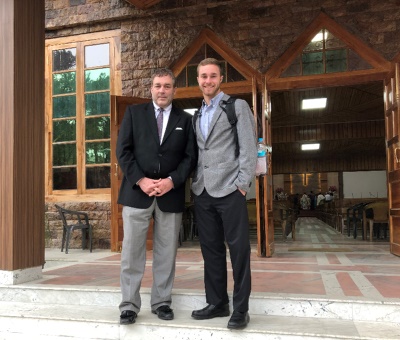 Meet Austin Shaner. The December 2017 Warner University graduate and IYC2018 intern has his sights set on Christ and his heart tuned to students at home and abroad. An interdisciplinary ministry concentration on sports ministry from Warner left Austin with a deeper desire to spread the hope of Christ through relatable methods like recreation, but that’s not what recently captured the attention of the international media. With his father Mark Shaner, Austin traveled to Bangladesh and India this spring for a few scheduled—and a few unscheduled—ministry engagements. While in India, certain circumstances put him unexpectedly on the front page of the newspaper.

In fact, at least three newspapers covered the story of this young American’s visit to Shillong. Though newspaper readership in the United States has declined for several decades, it’s still massive in India. Austin explains that over 100,000 people read the newspaper regularly there. To illustrate the power of the press, Austin traveled to a small village, two hours away, two days later, only to find that he was widely recognized in the community. But why the coverage in the first place? 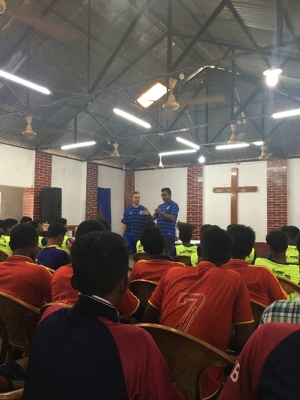 Austin Shaner and Tapan Borman sharing about Christ and soccer in Bangladesh.

A friend of the Shaner family is a politician in Shillong. They were spending time together and he invited Austin to sit in on a district assembly meeting slated for the next day. Austin decided to give it a try, but when he got there, he learned that he was the first “foreigner” ever to sit in on the meeting of a district council originally founded by Nichols Roy, a Church of God pioneer in the region. The impact of Nichols Roy on the area is far-reaching, as his involvement in the political arena of the day helped preserve land rights for the tribal groups in India. To this day, land rights for tribal minorities have remained intact for Christians and non-Christians alike. His photo hangs in the main assembly room to this day as a testament to his influence.

“I went in just as a friend, so I was sitting in the top section of the room,” Austin recounts. “I saw the section reserved for media, and soon they saw me. Some people started coming over and taking pictures of me, asking to interview me while the meeting was going on. They asked me why I was there, what my plans for the future are, etc.” As an example of his “celebrity status” as an American, Austin shares a humorous moment—“Our friend would say that Vice President Mike Pence is from our town,” Austin explains. “But as the story went on, it became that Mike Pence is a family friend!” 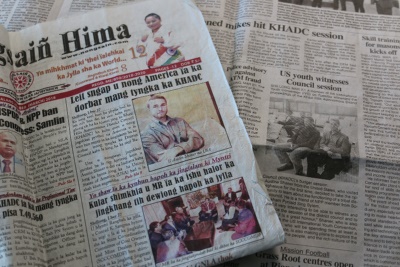 Two of the newspapers that covered Austin’s story.

The international attention enjoyed by Austin was something he’ll never forget, but something he doesn’t dramatize. For Austin, the real story was the ministry moments on the ground in India and Bangladesh. Austin was overcome by the worship services in Shillong, which were “packed to the max.” He was humbled by the opportunity to work in the name of Christ with teams composed of Muslims and Hindus. He was touched by the commencement ceremonies where his father spoke.

The IYC intern, who will be starting full-time in sports ministry this August in a refugee neighborhood of Charlotte, North Carolina, was stretched and challenged by his recent global experience. “As an American, lots of times we focus on the church in America,” he reflects. “But God is working in some incredible ways all over the world. To hear the stories of pastors and missionaries, and to be a part of what God is doing, greatly increased my faith.”