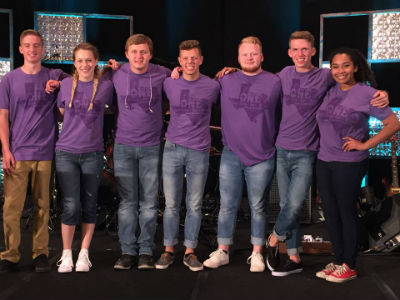 Just a few weeks remained until the big event. Though it was the first time these seven high school students had met, the responsibility to lead worship for thousands of teenagers in San Antonio, Texas, was on their shoulders. Whether they liked it or not, they had to learn to work together quickly. But almost immediately, it was clear that these once-strangers would become forever friends. After fulfilling their second and final obligation this July—leading worship for Leadership Summit in Anderson—they knew it wasn’t the end. God was calling the IYC2016 High School Band to keep it going, under a new name. Liberation has created quite the spiritual stir, exemplifying the rise of young leadership in the Church of God, and catching the attention of churches and state youth conventions across the country.

You see, not every IYC High School Band has gone “on tour” following their commitment to the International Youth Convention and Leadership Summit. Sure, band members have gone on to become outstanding worship leaders in churches and join other worship bands. But the hand of God at work in and through this particular collection of individuals has been so evident, how could they separate? Morgan Fast, whose parents serve as pastors at Centralia Community Church of God in Centralia, Washington, serves as vocalist and keyboardist for the group. She sheds some light.

“From the very beginning, our team had a special chemistry, and we felt as if we had known each other for years,” she explains. “During that first rehearsal weekend, we bonded intensely, shared our life stories with each other, and learned how to work efficiently through crucial rehearsals. After leading worship numerous times at IYC, we all agreed that we wanted to remain close and continue playing with each other, even outside of the commitment.” 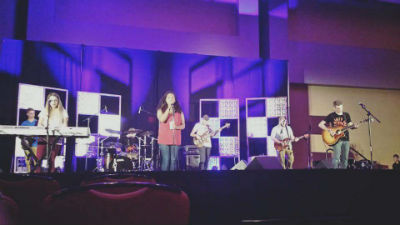 Photo: Liberation leading worship during the prayer walk at IYC.

The bond that was strong at IYC only grew stronger at Leadership Summit 2017. This is where they each realized God had more in store for the IYC2016 High School Band.

“Numerous people came up after services to tell us how the worship had touched or impacted them, and how God had worked in them during that time,” Morgan continues. “We as band members also experienced God moving in us during worship, prompting us to pursue his plan for our lives. We had a couple of people reach out to us directly, asking if they could contact us to come and lead worship at their church. During the week of Leadership Summit, we had several deep group discussions in which we told each other about these experiences and prayed together, asking God to lead us in the direction he wanted.”

As word spread about the band’s availability, the various pieces seemed to fall together just right. In conjunction with Leadership Summit, Liberation led worship at Tri County Church in DuBois, Pennsylvania, and Oak Lawn First Church of God just outside Chicago, Illinois. Liberation was selected to lead worship for the Florida State Youth Convention this November, and more possibilities are in the works. Miles may separate, and school schedules may present challenges, but Liberation is determined to do what they can to lead worship wherever God opens the door. So, how did the band determine their new name?

“One of the songs that had really impacted us and the others we were worshipping with during IYC was ‘No Longer Slaves’ by Bethel Music. The song, specifically the line, ‘I’m no longer a slave to fear; I am a child of God,’ really resonated with each of our life stories in one way or another. Singing about being liberated from the bondage of sin and being accepted into God’s family’ despite all of the mistakes we’d made and personal challenges we’d gone through’ took on a new meaning.”

Across the United States and around the world, God is on the move in the Church of God. Join the movement. Reach our world. Donate today at https://www.jesusisthesubject.org/give.