By chogministries
Posted September 29, 2014
In All Church of God
ISIS Crisis Confronted by CHOG Layperson, Pastor2014-09-292014-09-29https://www.jesusisthesubject.org/wp-content/uploads/2016/07/ChogLogo-Light.svgChurch of God Ministrieshttps://www.jesusisthesubject.org/wp-content/uploads/2016/07/ChogLogo-Light.svg200px200px 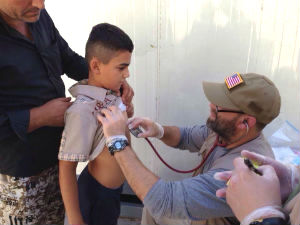 You’ve seen it on the news. You’ve agonized over the reports of torture and beheadings. You’re aware of how serious the situation in Iraq and Syria has become. Perhaps you’ve been on your knees, petitioning the Lord to provide for the persecuted, to protect the innocents, and to bring peace. If you’ve done so, then your prayers have not gone unanswered. By the prayerful support of men and women across the world, the Lord has granted David Sperow of Eastland Church of God in Lexington, Kentucky, the resources to bring hope to Christian refugees in Iraq.

A team of volunteers who paid their own way have just completed a mission trip to Erbil, Iraq, the capital of the Kurdistan region. As a result of their work, 4,250 Iraqi Christian refugees were provided with food. More than $16,000 worth of medical aid was delivered to five refugee camps, and more than 150 Christian children refugees were offered direct medical care. More than 10,000 articles of clothing were given away, and some 1,000 pairs of shoes were donated to the children in these camps. The team also built improved bathroom facilities that serve 150 refugees. Because winters in northern Iraq can get quite harsh, 12 hot water heaters were installed at refugee camps. 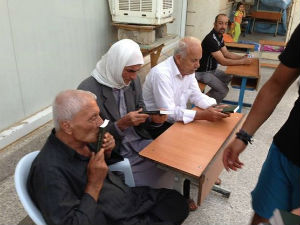 La Cima World Missions, the ministry that David and his wife Marty founded, partnered with DVM Disaster Aid Rescue Team to embark on an adventure that certainly wasn’t devoid of risk. DVM DART, composed of former military contractors and other professionals with experience in conflict zones, lent La Cima the valuable experience necessary to distribute hope in the form of humanitarian aid.

Austin Abney, pastor of Revolution Church in Wichita, Kansas, joined the team in a last-minute, divinely orchestrated arrangement. “When a lot of the news hit about the refugees making their way into Kurdistan, I was really troubled by it,” he recalls. “I’ve known Dave for nearly twelve years.” Compelled to ensure spiritual support would be available on the trip, the team encouraged Austin to join the group. “I purchased the plane ticket and I was in,” he remarks.

Not long after David and Marty married in 1996, the two began attending Eastland Church of God. Since then, the church has been a staunch supporter of the couple and their bold ministry of medical, dental, and relief missions. David Sperow, a dentist himself, has never had any formal ministry training; yet his heart for the Great Commission has driven him to answer the Lord’s call whenever—and absolutely wherever—that may lead. 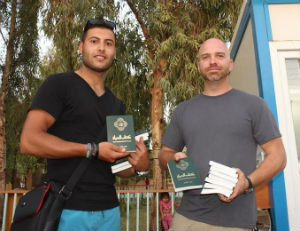 “God said, ‘Go,’ so we go,” David insists. “We rarely pick the mission. More often the mission picks us. Where each mission happens to be located on the globe is up to God. If he gives the directive, we buy the tickets and go. We have ended up in places we never dreamed of going, and often never even knew existed.” Like Jonah’s call to preach in Ninevah, David knows that God’s call will sometimes lead to places that are uncomfortable, if not downright dangerous.

“One thing I have come to realize on my journey with God is that our understanding of what it is to be in harm’s way has been skewed,” David explains. “In this world, the enemy is bound and determined to kill, steal, and destroy each one of us. We h 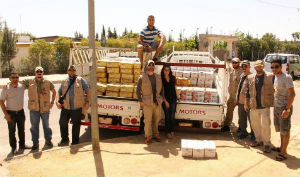 ave all been born into a spiritual war that has been raging since the dawn of time…Since we are in harm’s way from our first breath till our last, we have decided to not go out without a fight, and we have elected to fight for the heart of our King.”

David reports that the Iraqi Christian refugees are living in extreme conditions and undergoing severe persecution. Abandoned buildings, parking garages, and camps have served as shelters for many fleeing ISIS violence. In the midst of the chaos, David’s leadership has brought light into deep darkness. Besides humanitarian aid, the team distributed Bibles in Arabic. While Bibles often collect dust on American bookshelves, these Bibles were welcomed with tears, upraised hands, and kisses of joy. Pastor Austin Abney was particularly moved by this response of the Iraqi refugees. “It’s incredible to watch the joy in people’s faces—even in the midst of losing everything.”

“In the midst of losing everything,” David explains, “they are doing the best they can with the resources they have. Survivors who have seen their children beheaded or loved ones crucified, or executed in other horrific ways, are going through something for which I have no frame of reference. I try to think what it must be like and I simply cannot. They have proven their mettle, they have been tested in the fire, and they have most certainly not been found wanting. They have a witness and a testimony that is undeniable and more powerful than ever before. These are our brothers and sisters, and they are in need.”