An interview with Ruth Lyons

In September, Church of God Ministries Disaster Relief Committee sent $10,000 in emergency aid to support relief efforts in Turkey for refugees affected by ISIS. An interview with a Church of God contact on the ground offers a glimpse into the kind of vital ministry that is made possible by your support.

Reports indicate you are working with those who have never heard the gospel. Are you saying there are still unreached peoples groups in our world today?
The Bible tells us that there will be people of every tribe, every tongue, and every nation worshiping at the throne in heaven, but the job of telling everyone is not yet done. In 2014, there are still many people in the Middle East where we don’t know of a single Christian among them.

Who are the Yazidis, and how close are they to the ISIS crisis?
The Yazidis are an ancient people who are part of the Kurdish nation. Most of them live in the province of Nineveh in modern Iraq, although some live in Syria and Armenia. Their religion is closed (you cannot choose to become Yazidi; you are born into it) and they do not intermarry (if one marries outside the group, he or she ceases to be a Yazidi). Their religion has similarities to mystical Islam and to the ancient Iranian religion of Zoroastrianism.

Why are they front and center on our televisions lately?
The Islamic militants of Islamic State, called ISIS, have swept through their homeland. The Yazidis worship a supreme being called the Peacock Angel. They are facing persecution to the point of genocide from ISIS, who believe them to be devil-worshipers. The Peacock Angel can best be described as a form of redeemed Satan—Satan having renounced evil and gone back to his former status as an angel. They need to hear the truth—the gospel. 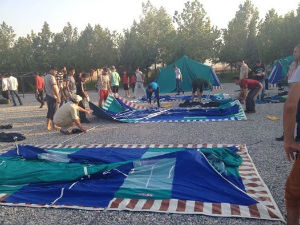 were forced to flee for their lives from the advancing ISIS jihadis. Many fled to the Sinjar Mountains and had to be airlifted from there. Many others crossed the border illegally into Turkey, after a frightening journey in trucks run by people-traffickers.

Why do they call this “God’s time for the Yazidis”?
It is significant that they fled to Mount Sinjar. This is a sacred mountain for the Yazidis, so symbolically they were casting themselves onto the protection of God. Those who then were able to cross into Turkey have been welcomed with open arms by the Turkish Protestant Church, which has begun a relief program under the slogan “Love your neighbor as yourselfj.” The Yazidis no longer trust those who are of the Muslim faith, as they have experienced such horror from them, but they are happy to meet the Christians, saying to Christians, “You are people of the Messiah.” This is a wonderful testimony as most of the Turkish believers who are helping them have themselves come to Christ from a Muslim background.

What sort of help is needed?
It is estimated that some 450,000 Yazidis have crossed the border into Turkey as war refugees. Just think, that number represents a little bit more than the population of Atlanta, Georgia, or Miami, Florida! These people are living under blankets stretched out between trees for shade. It is currently one hundred degrees in the sun. But soon it will be winter and temperatures will fall to forty degrees by day and twenty degrees at night. The churches are responding with winter tents, food, water, and supplies needed for hygiene.

Can the local church there do all of this by itself?
No! Even the Turkish government and international community are overwhelmed by the need. And politics in the region means that with floods of refugees in Turkey from all communities in Iraq and Syria, the Yazidis are being left out.

With a population of seventy-seven million, Turkey has only five thousand evangelical believers. Yet the churches are eager to offer their five loaves and two fish into the hands of our Savior for him to multiply and bless. Pastors are rolling up their sleeves and erecting tents to show the love of God to the Yazidis. Sunday 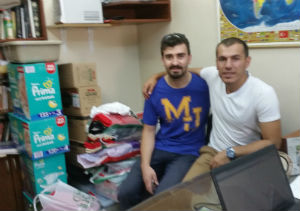 school teachers are organizing games for children traumatized by war and loss of parents. Women in the church are providing a listening ear for Yazidi women who lost children on the way or who were abused by soldiers.

Their resources are limited, but they have a heart for mission. At a service I attended in a major town in the region, the pastor was in tears as he told of a church member who earned only three hundred dollars a month but had pressed twenty-five dollars into his hand to use for the refugee ministry. “We cannot ask the world to help if we ourselves won’t give sacrificially,” he said. And that small fellowship of under fifty believers in their town of 1.6 million people took up an offering that morning that brought in the $1,000 needed to hire a truck to take tents three hours into the mountains.

What more can we do?
Church of God Ministries Disaster Relief sent a gift of 10,000 dollars in emergency aid in September. Much more aid is needed. Instructions for financial support are included below:

If you or your church would like to give to this special need, give to the NextGen Fund. Make checks payable to Church of God Ministries, P.O. Box 2420, Anderson, IN 46018-2420 and write “ME/Turkey Refugee Crisis” and project number 42.30401 in the memo. Or give online at www.chogmissions.org or www.three-worlds.com.