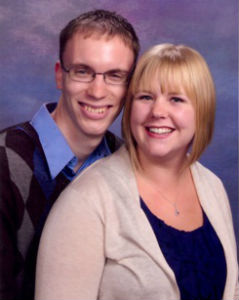 Ryan was born and raised in Forest Grove, Oregon. From the time he was in high school he felt a call to missions. He attended Warner Pacific College, where he received a bachelor degree in Middle/Secondary Education and Social Science. While at Warner Pacific he participated in a short-term mission trip to Honduras. Ryan joined Rebecca at Anderson University School of Theology in the fall of 2011 and will soon complete his Masters of Arts in Intercultural Service.

Rebecca, a pastor’s daughter, was born and raised in Albany, Oregon. After a visit to relatives in Cairo, Egypt, during high school, she felt God’s call to missions. She attended Warner Pacific College where she earned a degree in Early Childhood/ Elementary Education with a minor in Christian Missions. While at Warner Pacific she participated in two short-term mission trips to Myanmar and Honduras. She received her masters in Intercultural Service at Anderson University School of Theology

Ryan and Rebecca met while attending Warner Pacific College and were married in July, 2011. As part of their masters program they went on an internship to KIST for three months and it was there they felt God’s call to return as missionaries. At KIST they will be combining their calling and training in education and intercultural ministry to serve God’s kingdom.