By chogministries
Posted January 16, 2017
In All Church of God, Global Strategy
International Outreach to Refugees Growing Fast2017-01-162017-01-16https://www.jesusisthesubject.org/wp-content/uploads/2016/07/ChogLogo-Light.svgChurch of God Ministrieshttps://www.jesusisthesubject.org/wp-content/uploads/2016/07/ChogLogo-Light.svg200px200px 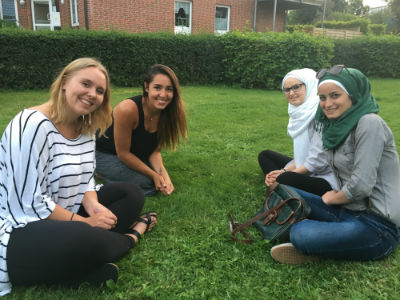 Photo: Cultural differences fade when Christ is in view.

The global refugee crisis continues to affect Europe greatly. North Africans are continuing to make the dangerous journey toward Italy. Refugees are entering into Europe by way of Russia, and nearly one million continue to live in temporary housing in Germany. Many governments are reacting with anti-immigrant hostility, and racist and nationalist parties are gaining ground across the continent. Fortunately, the church is different than the world.

The refugee crisis is being viewed as an opportunity for many in the Christian community. For the Three Worlds Team (3W) of Global Strategy, this has been an opportunity to work even more closely in partnership with the German Church of God. The North American Church of God is now contributing to help the German Church of God do ministry and evangelism to refugees. In Bad Segeberg earlier this year, Frank Bonkowski hosted Audrey Weiger (3W-Berlin) and a group from Calgary, Canada, to minister to refugees. Pastor Frank also spoke about the refugee crisis at the CHOG Table held this past June in Anderson, Indiana. Dan and Christy Kihm (3W-the Netherlands) have visited a Turkish-Bulgarian fellowship in Duisburg. Hannover, Bremen, and Hamburg are also examples of the places where the Church of God in Germany is reaching out to refugees. Ken Oldham (3W-Middle East) recently visited each site to provide further recommendations about how the 3W team, Global Strategy, and the North American church can further partner with the German church.

But Germany is not the only place where the church is engaging in, and assisting with, the refugee crisis. The Church of God in Hungary has had a ministry to refugees for a few years. The Church of God in Rome has seen an influx of new families join the church, including a family from Pakistan. Attendance at the Rome Church of God is higher than it has been in decades, just as the church began its recalibration for growth and expansion! The Church of God in Paris has started an outreach to refugees that is quickly winning converts from Islam. Outreach to the refugees on the streets of Paris is turning out to be highly effective. The Church of God in North America has also partnered financially to launch the next phase of this ministry. The church is seeing an increase, not only in refugees coming to Christ, but also Christian volunteers (particularly the young) that want to use this opportunity to share the gospel. The brothers and sisters in Paris are even sending teams to Thessaloniki, Greece, to serve as Arabic translators to newly arrived refugees.

In many ways, this is revitalizing the church in Europe and reminding them of the importance of being the salt and light of the earth. Our Church of God region remains very united and full of collaborative efforts. The 3W team is at the middle of this synergy and connection, believing and modeling that we are stronger together than we are apart. All of this is a reminder that the negative stories on the news do not reflect all that is happening in the world. The church is using this situation to grow, to mature, to work together on a large scale, and to bless others. Be encouraged!