Inspired by the Joy

By chogministries
Posted June 5, 2012
In All Church of God, NAC: North American Convention
Inspired by the Joy2012-06-052020-02-29https://www.jesusisthesubject.org/wp-content/uploads/2016/07/ChogLogo-Light.svgChurch of God Ministrieshttps://www.jesusisthesubject.org/wp-content/uploads/2016/07/ChogLogo-Light.svg200px200px 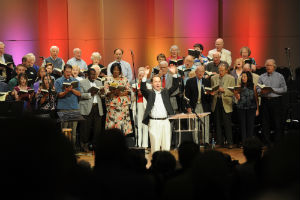 Is it the great gathering of the saints to worship the Lord? Is it the hundreds of voices lifted heavenward in beautiful four-part (or five- or six-part) harmony? Is it the message of the salvation, unity, and holiness expressed through rich poetry? Is it the interweaving of the history of the church into the experience? Or is it the celebratory atmosphere of the song leaders, musicians, and the congregation?

Thirteen years ago, the Heritage Hymn Sing had its humble beginnings in Byrum Hall. For a get-together that had not been promoted except by word-of-mouth that year, there was a surprisingly good turnout. The video camera was an afterthought. It wasn’t long, however, before the pioneers of this convention staple realized that something special was happening.

For the past several years the Heritage Hymn Sing has been held in Reardon Auditorium. CDs and DVDs of the service are sold nearly as fast as they are produced. It has become one of the most popular events during the North American Convention. Smaller-scale heritage hymn sings began popping up across the country at camp meetings, conventions, and local churches. And as the late Dr. Robert Reardon announced between songs one summer, “I think you don’t know that it may be 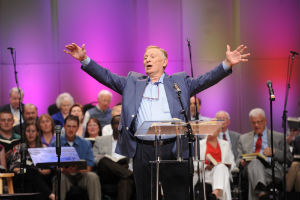 the singing of these songs that we love and have known all these years that is beginning to revive the singing of Church of God songs in the local churches!”

This year, Joe Gregory, minister of worship arts at First Church of God in Vincennes, Indiana, will once again host the Heritage Hymn Sing. Following the evening service on Sunday, June 24, the Church of God will once again lift voices in unity for twenty-five to thirty hymns. Special guest leaders slated to direct portions of the service include Ron Kulp, Leslie Barnes, and Mick Gilliam. There will be a few special solos, a mixed trio, and—for the first time ever—a handbell solo. To top it all off, Dr. Arlo Newell will share stories behind the songs and their composers.

Just what is it that keeps so many people coming back year after year to the Heritage Hymn Sing at NAC? Those who have attended know the experience is indescribable, and it may be too difficult to pinpoint just one compelling element. Yet it seems that joy is a common theme. There is joy in the Lord. Joy unspeakable!