By chogministries
Posted June 4, 2015
In All Church of God, Great Lakes
Indianapolis Church Offers Passport to Employment2015-06-042015-06-04https://www.jesusisthesubject.org/wp-content/uploads/2016/07/ChogLogo-Light.svgChurch of God Ministrieshttps://www.jesusisthesubject.org/wp-content/uploads/2016/07/ChogLogo-Light.svg200px200px 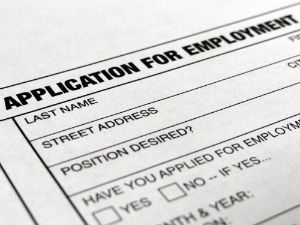 Those who’ve traveled outside of the country know the challenge that crossing national borders can pose. The application, the background checks, the miscellaneous paperwork, and the time and energy consumed is enough to keep some from experiencing the blessings of global travel altogether. Many unemployed men and women in America have been laid off by no fault of their own, and they find the job hunt similarly restricting. The hot-button issue of how to solve the unemployment problem is often the topic of conversation, but often nothing more. Under Earle Hart’s leadership, Church at the Crossing in Indianapolis is doing more than just talking about the jobless rate. Since 2008, they’ve offered 942 job-seekers “passports” to full-time employment.

Few can forget the economic collapse of 2008. Earle Hart remembers it quite vividly. It was the year he was “encouraged” to retire from a leadership position to prevent the layoff of another, younger employee. Though he was left unhappy and feeling unappreciated, he soon found reason to forget his own misfortune. Two of Earle’s friends who would soon find themselves without a job decided to contact him for help. It would soon be apparent that God equips those he calls, for though Earle had no career counseling experience, his choice to help his two friends successfully find full-time employment started him off on a path he could have never predicted.

Meanwhile, others heard of Earle’s successful job hunt for his two friends. They started asking for help, too. Feeling underqualified and slightly overwhelmed by the need, he wondered why no one was doing anything about it. After posing the question to his wife one night, she turned to him, looked him squarely in the eye, and said, “So what are you doing with the rest of your life?” 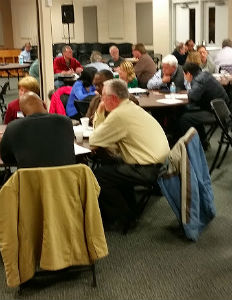 Nine-hundred forty-two successful cases later, Earle is rejoicing in how God has used the ministry of Passport to Employment. A multitude of other cases have involved getting part-time or temporary work for individuals. Four families have been saved from foreclosure. Four individuals—of which Church at the Crossing is aware—have surrendered their lives to Christ through the direct impact of Passport to Employment. Countless others have acquired lifelong skills and confidence they never knew they could experience. Only 10 percent of those helped by Passport to Employment attend Church at the Crossing, revealing the outreach nature of the ministry.

“Passport to Employment is a hands-on program created to do more than just reduce unemployment,” Earle explains. “It is a program to help people get back on their feet and feel worth. It is a program that gives hope and a future to those who attend.” This hope comes through the efforts of fourteen volunteers who, based on their individual skillsets and experiences, pour their lives into making this ministry happen each week. Nearly every Monday, the primary gathering—featuring prayer, guest speakers, testimonies, job-hunting tips of the week, business-card swaps, and much more—takes place from 7:00 until 9:00 in the evening, seeing an average of fifty to sixty participants. Each Tuesday, the ministry offers a job search workshop. Three accountability groups now meet regularly at different locations across the Indianapolis metropolitan area. Free photo sessions are offered two times a year to update photos for LinkedIn. One-on-one career counseling is available throughout the week, family counseling is accessible, and business attire is offered through partnerships with “clothing” banks. An online job board is also posted on the church’s website, which features some 120 employers (www.golove.org/passport). Numerous other job-related services are offered by Passport to Employment to help both the unemployed

and the underemployed. Services not offered directly are made possible by referral.

And be sure you have a customized voicemail message on your phone. Let callers know that you happen to be searching for employment. You’ll be surprised when you return calls, for conversation won’t immediately address the originally intended topic. Earle says that people will inquire more about your situation and even offer to stay on the lookout for opportunities.

Utilize e-mail signatures—don’t just sign your name at the end of a message. Let everyone know your skillsets and the kind of job you’re looking for.

These hints just represent a small part of the knowledge Earle has gained, not from formal education, but by auditing classes at the state employment office and spending hours and hours speaking with human resource managers and recruiters. Any church can develop a ministry like Passport to Employment, but it will take hard work and a significant time commitment. Therefore, Earle warns, the pastor is not one to take on such a load. Laypeople, pay attention!

People ask Earle all the time why he devotes so much time to an enormous project when he could be enjoying retirement. Besides his response that retirement from the Lord’s work is simply unbiblical, he says, “It has to do with the fact that the Lord has shown me that I’m drinking from my saucer and not my cup. My cup overflows. Now I’m giving back to others.” 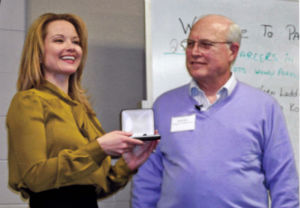 Passport to Employment has received much notoriety and acclaim, as evidenced by Earle’s acceptance of the Indiana’s Jefferson Award for Outstanding Public Service in 2012. Earle makes it clear that the work he does is not at all about the accolades he’s received. “You don’t have to have the skill. You don’t have to have the background. You just have to be willing to listen to the Lord and follow his direction,” Earle insists.

Want to know more about this successful ministry that has addressed a practical need? Could you benefit from some job-hunting tips and tricks? Earle Hart would be happy to chat with you. Contact Earle at p2e@golove.org.