By chogministries
Posted April 6, 2015
In All Church of God, Great Lakes
Indiana Church Awarded Community Partner of the Year2015-04-062015-04-06https://www.jesusisthesubject.org/wp-content/uploads/2016/07/ChogLogo-Light.svgChurch of God Ministrieshttps://www.jesusisthesubject.org/wp-content/uploads/2016/07/ChogLogo-Light.svg200px200px 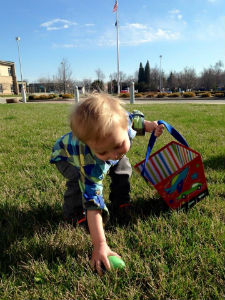 If your church were to close its doors, would anyone notice? Would anyone outside of the congregation care?

You may have been asked these questions before. Or, perhaps this is the first time you’ve considered the implications of such congregational introspection. CitySpring, a Church of God congregation in Westfield, Indiana, has asked these questions several times. So they came up with a wild idea: instead of starting a bunch of outreach programs they were interested in, they would ask the local government what the city needed. Just a couple of years later, the church is humbled to receive the first-ever Partner of the Year award. 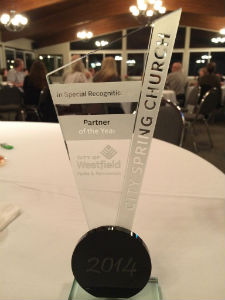 “When we started dreaming for CitySpring, we asked the question, What would it look like for our church not to be just another church in our city, but to be a church for the city?” explains Matt Gaylor, lead pastor of CitySpring. Not wanting to use precious resources on ideas that had no real impact on the community, Matt encouraged the congregation to hone in on whatever direction the city could give. Interestingly enough,the city had longed to see the community park turned into a place for summer movie screenings. Without the necessary funding or equipment, the city couldn’t accomplish their goal alone. But in God’s sovereignty, the city soon discovered that the mobile nature of CitySpring meant that the church had projectors and sound equipment at-the-ready, and stored in a trailer. On average, seven hundred people now attend CitySpring’s Movies in the Park. “There are some perks to being a portable church!” Matt reflects.

The church wasn’t always portable, however. As a restart, the church has had to overcome some hurdles, including its facility, to experience the momentum it sees today. Matt and his wife entered the scene to help re-start a church that was struggling. Two years passed before the previous church’s chapter closed, and the new chapter of God’s unfolding story in Westfield could commence. On June 3, 2012, CitySpring was launched, and they have been self-sustaining ever since. But they’ve never let it go to their heads. “We need each other,” Matt explains. “For prayer support, for moral support, and yes, for financial support. We’ve also learned that people in our churches want to make a difference in the world; they just don’t always know the tangible steps to take in order to do that. I’ve learned that my job is to help create stepping-stones to help people see how they can make a difference. In the process, they are being transformed into people who look an awful lot like Jesus.” 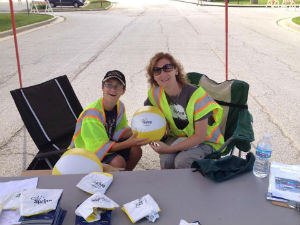 CitySpring has made Jesus the subject of everything they do. From their participation with Freedom Sunday and the fight against human trafficking, to their local community service, they have been motivated by one purpose—to lift up the name of Jesus. Matt illustrates, by talking about the ordinance of foot washing, how sometimes the Church of God fails to make Jesus the subject. He doesn’t advocate against the practice, but hopes that the Church of God will live out the teaching behind what sometimes becomes merely a ritual. “To be honest,” he reflects, “we have these cool little foot washing services where tons of ‘holy’ people attend and wash each other’s feet, but I think we miss the point of what Jesus is calling us to be. He wants us to serve each other and our communities. Jesus is the subject, not the Bible. Jesus is the point, not the sacrament of washing feet. Jesus calls us to serve our neighbor.”

CitySpring never set out to win an award from the city. To this day, they have no ambition to be recognized for their community service. But as they point to the cross, and away from themselves, people are taking notice. “There are all sorts of ways to grow a church. We dream of being a church that reaches people. We think it would be awesome if people first hear of CitySpring not because they receive a cool flyer, but because we served them in some capacity.”

Learn more about how the Church of God is making Jesus the subject at www.JesusIsTheSubject.org.