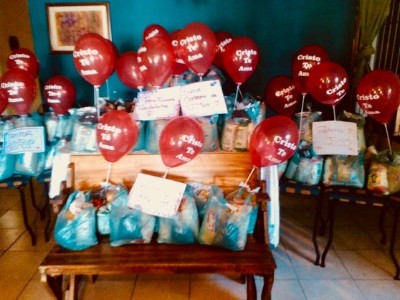 “Christ Loves You” bags for Venezuela.

Venezuela has been experiencing a severe economic crisis since 2014. Hyperinflation is out of control, and regular minimum wage hikes have not kept up with the rising costs of food. It is reported that inflation is approaching 1 million percent annually! For example, in December a bag of sugar cost 500 bolivares soberanos. In the same bag of sugar in January cost 5,000 bolivares soberanos.

Imagine! Food prices are rising nearly by the hour. People that can still afford to purchase food have trouble finding it, as many stores are closed or remain open with nearly empty shelves. Those stores still in business want payment in cash, something that is nearly impossible in the current context where paper money loses its value almost as soon as it is printed. Locals report that, in many cases, food is treated like contraband. In the year 2017, the average Venezuelan lost 24 pounds as a result of these food shortages.* The crisis has led to increased corruption, violence, and even mafia activity, fueled by desperation.

Sending funds into Venezuela is nearly impossible, as bank accounts are closely monitored and international transactions heavily questioned. The best way to send financial help is for a trustworthy person to carry funds into the country, which is also dangerous, as even airport personnel and customs officials have been known to be a part of plots to rob and cause harm to international travelers they suspect of carrying funds. A former Church of God missionary has been sending small amounts to Venezuela through every available channel. He serves as our point of connection and identified one courageous leader who was traveling to Venezuela and was willing to assume the risk involved in transporting funds and coordinating their distribution.

Between September and December 2018 Church of God Hunger Relief sent $1,000 into Venezuela. Although the amount seems small, local churches used these funds to augment their already established, ongoing feeding programs. On the first Sunday in January 2019, local churches in Venezuela were provided emergency relief bags containing the following:

The packages were decorated with “Christ Loves You” balloons, donated by a lady from the leader’s home country.