How a Growing Nontraditional Traditional Church Plant Began in Arkansas

By chogministries
Posted March 6, 2018
In All Church of God, Give Life, Southeast
How a Growing Nontraditional Traditional Church Plant Began in Arkansas2018-03-062018-03-06https://www.jesusisthesubject.org/wp-content/uploads/2016/07/ChogLogo-Light.svgChurch of God Ministrieshttps://www.jesusisthesubject.org/wp-content/uploads/2016/07/ChogLogo-Light.svg200px200px 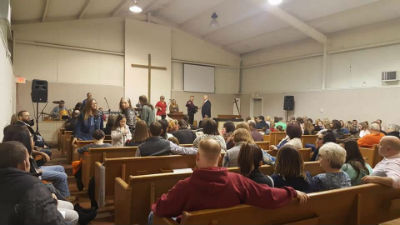 They have no formal training in church planting, but they’ve planted a church. Their worship and ministry style is neither flashy nor trendy, yet they’ve attracted a crowd. There was no market research conducted before their launch service, yet they’re already making disciples. Kevin and Danielle Edgar recently returned to a community they knew and loved, and simply began preaching the Word of God, singing a few gospel songs and hymns, and building friendships. Faith Fellowship Church of God is a growing, nontraditional, traditional church plant in Paragould, Arkansas. They may be doing things differently, but they’re certainly getting things done, and the results are both God-glorifying and hell-shaking.

Early in their ministry, Kevin and Danielle experienced firsthand the power of God’s Word and old-fashioned authenticity to transform a community. For nineteen years, they pastored First Church of God in Paragould and watched as God grew the congregation from 30 to 275. During that time, they established drug rehabilitation ministries, programs to address hunger, a jail ministry, and initiatives to care for pregnant women—including those addicted to drugs. It was a lot of work and, after nearly two decades, an opportunity opened up to preach the gospel in Hawaii. For a year, they sought to recharge their batteries in paradise (though ministry is certainly not easy in paradise!); their long-term itinerary was rerouted, however, after a combination of health and family-related issues surfaced. 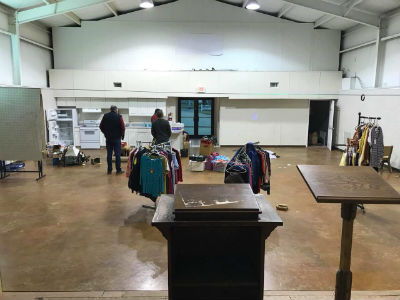 Preparing the nontraditional space for a sanctuary.

The Edgars’ four grown children and eight grandchildren remained in Arkansas while difficulties began to arise. Kevin’s mother passed away, Danielle’s father fell off a tractor and broke his hip, and Kevin received two stents after a heart attack. “The miles were too far and the price was too high to keep flying back for everything,” Danielle recounts. It was an unexpectedly short season of ministry in Hawaii, but God had a plan for the Edgar family.

Much of the community of Paragould is an unreached mission field, and the need for another Jesus-centered church was real. Word got around quickly that the Edgars were returning to Paragould so, with the help of their grown children, some who were saved under their ministry, as well as close, old friends, they started a new church. Blessings began coming their way. One of the Baptist churches very familiar with the kind of transformative ministry synonymous with the Edgars decided to donate twenty pews to the church plant. Another church stepped forward to donate songbooks, and a local carpet store heard about the new ministry and donated flooring! “It was a God-thing,” Danielle reflects.

Word-of-mouth advertising and a few Facebook posts culminated in the launch service on January 7, at which 136 people showed up. In Danielle’s words, “Excitement was in the air. The people were like sponges, soaking in every word, every song, and the praises to God were almost overwhelming.” 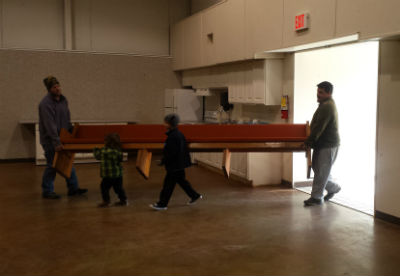 Hauling the pews into the worship space.

The ministry duo has been asked how they could start at church without training or experience. Pastor Kevin responds, “Jesus said, ‘Fish here, fish there,’ referring to Luke 5. Stick to the basics. Old fishermen aren’t interested in the latest fads and techniques. Likewise, fishers of men should be real, preach the Word, and reach out to people.”

The atmosphere at Faith Fellowship is anything but modern. Some, in fact, say it’s like a camp meeting every Sunday. Traditional worship music, including old gospel songs and hymns, are the norm. But it’s in no way a funeral dirge; these Christians know how to praise with joy in their hearts and smiles on their faces. “They come to celebrate what God has done for them through the week,” Danielle explains. “It’s a very joyful experience.”

Traditional may describe the worship service, a notably nontraditional element among church plants today. But the Word of God never changes, and the message is as contemporary—as timeless—as it’s ever going to be. “From the professional to the addict, the Church of God has the message the world needs today,” Danielle explains. “Now the number one problem Faith Fellowship has today is not enough room to hold the people. We’re already looking for another building!”

In Arkansas, across North America, and around the world, God is on the move in the Church of God. Join the movement. Reach our world. Donate today at give.jesusisthesubject.org.