Household of Faith: Pastors Cherish a Long Legacy in the Church of God

This year, the Church of God movement turns 140 years old. During that time, there have been many faithful men and women who have pastored our congregations. Some of today’s pastors have legacies that go back four or more generations. Two such pastors have legacies of that span generations. But they have very different stories. They are Robert Hendrix Jr. and Allan Hutchinson.

Both pastors didn’t start their careers in ministry. In fact, both of their fathers wanted it to be clear if they were called to be pastors, it had to come from God, not family. Pastor Hutchinson said, “My dad was quick to say, ‘I’m not going to call you. The Lord has to call you. If he isn’t calling you, then I would advise you not.’ He wanted to make sure it was a clear calling from God.”

Pastor Hutchinson continued, “I’m not a Church of God minister because my dad told me to be one, but he did create an environment of ministry in our household. He helped his children and grandchildren see the possibility of ministry. But he made it clear, ‘There are no grandchildren in the family of God, only God’s children.’”

Pastor Hendrix received similar advice. His father was very encouraging and told him, “Don’t worry so much about your legacy, but be willing to listen to the Spirit. Make sure it’s your calling and not just a result of your legacy.”

Yet both agree their families were influential. Pastor Hendrix commented, “When I told my father God was calling me to ministry, he replied, ‘Son, always be obedient to what the Spirit is calling you to do. Don’t make the mistakes I made.’ He was a bivocational pastor, and after working a full day, he would be called away to the church. He wanted to be sure I didn’t let my family suffer for ministry.”

That said, the two pastors have very different stories of how they answered the call to ministry.

Pastor Hendrix is a fourth-generation, ordained Church of God minister. He also had three great uncles and two uncles who were pastors. His father, Robert Louis Hendrix Sr. pastored for over fifty years for Missouri and Kansas congregations. Pastor Hendrix Jr., known popularly as “Spanky,” remembers his dad as a dedicated pastor as well as a church architect. “He would come home from the office, eat dinner, and then would be off to do ministry. He was always called to the church.”

Both Pastor Hendrix Jr. and Sr. hesitated before answering the call. Pastor Hendrix Jr. said, “Early in Mom’s and Dad’s marriage, they were struggling, and Dad left for a while. Part of Dad’s struggle was wrestling with his call to ministry, but he feared what Mom would think. Some of their friends were going through divorces and Mom feared the worst. When Dad returned and told Mom, ‘I think God is calling me to be a pastor,’ she said, ‘Thank God! I thought this would be much worse!’” 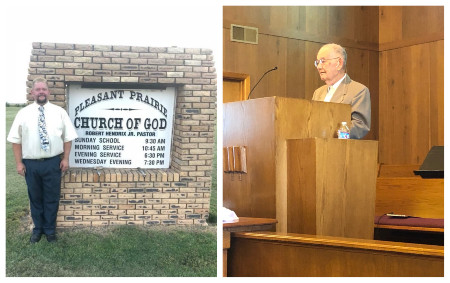 Pastors Hendrix Sr. (right) and Jr. (left). What a legacy!

As a pastor’s kid, he saw the negative side of ministry. “I joined the Marines and spiraled into deep years of living a decadent life.” For more on Pastor Hendrix’s prodigal years and his redemption, read the 2017 CHOGnews article titled, “Pastor Robert Hendrix: A Life Reclaimed.”

Pastor Hendrix was thirty-three years old when he was saved and began hearing God call him back to ministry. “God told me, ‘I called you to be a minister and I’m still calling you.’ I said, ‘But Lord, look at what I’ve done!’ God said, ‘I am still calling you!’”

In hindsight, Pastor Hendrix is thankful for his family’s legacy of faith. “My ancestors were attracted to Holiness teachings. It’s amazing to know the Holy Spirit can indwell us. It makes it possible to live above sin. Not that I’m there yet, but we do have a choice through Jesus Christ. It’s something my father, grandfather, and great-grandfather taught. And now I get to teach it!”

He is also thankful for the grace exhibited through the churches he grew up in and now pastor. “Last year, I had five surgeries. God worked through all of them, plus my church has been very supportive. I know from my experience in secular jobs that no other workplace but the church would be so supportive.”

Like Pastor Hendrix, Pastor Hutchinson’s call came after he had been in the workforce. “I felt the call to the ministry about three years out of graduate school. I was an investment manager for a bank and thought this was to be my career. Yet the call to ministry grew stronger.”

His maternal grandfather was a pastor, as was his dad. “I also have a brother-in-law and now two children who are in ministry. About thirteen years ago, I realized how one generation had an influence on others.

Pastor Hutchinson said, “My dad, Stanley Hutchinson, has been a mentor to not just his family, but younger pastors. I have seen how pastors have benefited from the mentorship of my father and now I’m able to pour into younger pastors.”

One piece of advice Allan received from his dad is how crucial God’s calling must be to sustain pastors. He said, “My father advised, ‘When the calling of God is strong and definite in our life, it will sustain you in the most difficult days of ministry. It is the mooring that keeps you secure even when things are going bad. You have an anchor to hold onto.’”

Pastor Hutchinson has also observed that legacy doesn’t just come from family ties. “My dad has mentored about ten pastors that have felt the call to ministry. Two out of those ten were family.”

There are undoubtedly other ministry legacies within our movement. We would love to hear them and celebrate the faithful service of our fathers and mothers. Do you have a ministry legacy story to share? Let us know via our online form: https://cgm.formstack.com/forms/sharethestory. 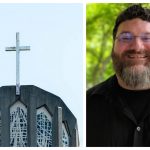 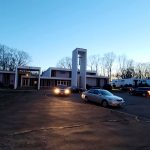 Village of Hope at Antioch: A Ministry Dream Realized in ConnecticutAll Church of God, CHOG, Northeast