By chogministries
Posted December 17, 2014
In All Church of God, Global Strategy
Hope Visible Beyond Pakistan Persecution, Tragedy2014-12-172014-12-17https://www.jesusisthesubject.org/wp-content/uploads/2016/07/ChogLogo-Light.svgChurch of God Ministrieshttps://www.jesusisthesubject.org/wp-content/uploads/2016/07/ChogLogo-Light.svg200px200px 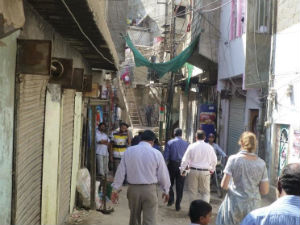 Photo: Inside one of the Christian “colonies” of Pakistan.

Taliban forces sent shockwaves of terror throughout Pakistan on Monday, December 15, as more than one hundred forty lives—mostly children—were abruptly cut short. Once again, the world watches as brutal violence erupts in a volatile part of the world. Christians are called to stand against such ugly displays of evil, and the Church of God has once again rallied together in prayer for peace and consolation. While tragedy has struck again in the Middle East, Pakistani Christians are standing firm. Though Pakistan has long been a hotbed for persecution of Christians, the Church of God is taking a stand for Christ there.

Believers in Pakistan express their allegiance first to God. But like Christians in the United States, they too feel a sense of pride for their homeland. According to Don Armstrong, regional coordinator for Global Missions in the Asia–Pacific region, the collective sorrow is similar to what the United States felt following the 2012 tragedy at Sandy Hook Elementary in Boston. “The tragedy in Peshawar happened in retaliation for what the government is doing against Taliban forces in Pakistan. Though the Christian community in Pakistan is largely separate from the region near the shooting, I can’t help but feel that the church feels this is an attack on all of them.” Don Armstrong should know. He and Caroline just returned safely from a successful visit with one of the Christian churches there. It was the first time that the Church of God has entered into Pakistan in many years.

Major attacks against Muslim groups are, thankfully, not too common. Yet persecution of Christians in Pakistan happens every day. In spite of that, as Don and Caroline Armstrong have learned, the Christians remain unshaken. “Before we took the trip, we got the impression from reading stories that the church there is shaking in its boots, in hiding, and close to evaporating,” Don explains. “But it’s the opposite. It’s a very strong church. They’re not afraid to proclaim the gospel, share that they are Christians, and put crosses on their churches. Still, they do know their boundaries, and when tragedies like this shooting take place, they’re reminded that anything can happen.” 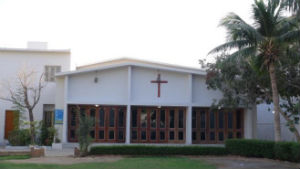 The Armstrongs traveled to Karachi, far to the south of Monday’s massacre. In spite of apprehensions, they came away with a clearer picture of the circumstances Christians deal with in Pakistan, as well as the needs that are present. Upon arrival, their guide introduced them to ten area pastors. The group immediately formed a prayer circle, which, to the Armstrongs, seemed like a dangerous thing to do. “What was remarkable to us was that this occurred in a very public place—the loading area at the airport,” Don explains. Later one pastor explained the group’s actions: “We can’t let fear rule our lives. We are all ready to die if we must.” Don Armstrong reflects, “It was especially humbling to hear them pray—not for protection—but for boldness and courage.”

With prayer horns blasting from mosques at every turn, the Armstrongs made their way through the city to the colonies where most Christians live. For protection and support—and also because of their perceived inferiority—believers cluster in walled neighborhoods with narrow, deteriorating streets. Don Armstrong compares these colonies to what Jewish ghettos may have looked like in the World War II era. Shunned by Muslim Pakistanis, up to one thousand Christian families have to develop their own schools or go without education. Most of the churches in Pakistan also meet in the heart of the colonies. The churches there have tremendous needs, and the Church of God is seeking the Spirit’s direction on how to meet them.

By partnering with already established churches in Pakistan, like Philadelphia Pentecostal Church of Pakistan, the Church of God sees an opportunity for maximum impact. Though details are still uncertain, the meetings were a great start. “We’re obviously waiting on God’s direction,” Don reveals. “We do see many opportunities in the area of education, through re-establishing schools and possibly helping with theological training for pastors. There’s also always a need for more church buildings and so much more.”

Stay tuned as the Lord turns more pages in this developing story in Pakistan. Learn more about Church of God missions at www.chogmissions.org.