Honoring Our Chaplains, All Veterans This November

By chogministries
Posted November 4, 2014
In All Church of God, Chaplain Ministries
Honoring Our Chaplains, All Veterans This November2014-11-042014-11-04https://www.jesusisthesubject.org/wp-content/uploads/2016/07/ChogLogo-Light.svgChurch of God Ministrieshttps://www.jesusisthesubject.org/wp-content/uploads/2016/07/ChogLogo-Light.svg200px200px 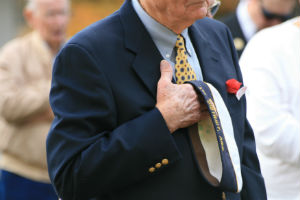 How much do you know about our Church of God chaplains to the military, hospitals, and correctional facilities? David Erb knows a lot about them. He serves the Church of God as its chaplain endorser. As Veterans Day fast approaches, he urges the Church of God to remember not only our country’s men and women in uniform but also those who minister to them in the role of chaplain.

The Church of God website, www.JesusIsTheSubject.org, states that our chaplains, who are ordained Church of God ministers, are “an extension of the church’s ministry to persons away from home wherever they may be, in the military, on a hospital bed, in a correctional facility, or laboring within their work environment. They are called by God and endorsed by Church of God Ministries to take his message and indwelling presence to people wherever they are.” Specifically, our military chaplains represent Christ to our military. They exist to listen the needs of soldiers, to counsel, to provide spiritual support, to bring messages of hope, and just to be there for them. “There is a real ministry of presence in the military,” David Erb explains. “Just by being there, you are a sign of hope, reminding people that there is more to life than just the moment in which they find themselves.”

David Erb believes that chaplains are vital to our military. Without them, he explains, you simply don’t have the deep moral insight and bearing for major decisions that have to be made. “When you remove Christianity from the military, what are you left with?” he asks. “You want people to wrestle with that question, Is this the right thing to do or not? A military chaplain serves people of all ranks and positions, and one of the unique roles that you have is that we have the ear of those up on the chain of command.” 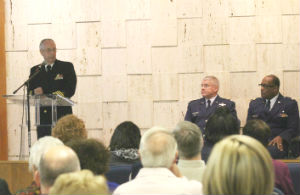 When David was drafted during the Vietnam War, he knew he had a few options, including leaving the country to avoid a war he wasn’t particularly fond of. “But I said if I leave the country, someone else will get drafted in my place. What gives me the right to say my life is more important than theirs? I’ve felt that as a United States citizen, if my country called me and needed me, I was willing to serve. At the same time, I was willing to serve Christ. If you look at Scripture closely, there’s never a place where Jesus told a military member to leave the military. In his dialogue with the centurion, Jesus didn’t say, ‘I’ll heal your daughter, but then you must leave the military.’ And when we render to Caesar what is Caesar’s, we’re compelled to be good citizens and recognize the authority that is over us. Also, when we recognize the reality of evil in this world, we understand that it can only be held in check by appropriate force of resistance to that evil, so that others can live free.”

For those who do choose to serve, there are a variety of ways the Church of God can pray. David cites safety, strength, encouragement, as well as physical, spiritual, and mental health as universal needs, and especially for those who serve as chaplains. David knows firsthand how easy it is to fall prey to fatigue on the job. “They face all the same challenges that every service member faces,” he explains. “In reality, they are in the midst of the same hardships—family separation, working in the field, and being out in the heat, in the cold, in the dirt, in the misery. And they have to be available 24-7, ’round the clock.” Prayer, however, is not the only way of supporting these men and women.

Veterans Day is just around the corner, and David offers some ideas for Christians to celebrate the holiday appropriately and in a way that offers tangible support. “Remember our veterans, and give thanks,” he says. “Veterans Day is a time when we can thank them personally and realize that many of them have seen the hellishness of war and combat, which never will leave their consciousness. Veterans Day is an opportunity for Christians to reach out to a veteran. Since Veterans Day is always observed on November 11, I would encourage churches to not just say thanks to their veterans during the worship service but also to plan a breakfast near the holiday to honor veterans in the church and community. If businesses are doing it, and veterans are pouring in through their doors, imagine the blessing if the church were to do it? It also can be a healing process when we show them love of Christ, that church can be a healing environment and that they are welcome. Even if you’re against war, you can show them the love of Christ. Bring them in and love them. Heal them.”

David Erb served the United States Navy for more than twenty-seven years in active duty, in addition to five years in the reserves. Since 2000, he has offered his chaplaincy experience to the Church of God through both volunteer and part-time support. Learn more about Church of God chaplain ministries at www.jesusisthesubject.org/chaplain-ministries.