Before Sandi Patty was a household name in the Church of God, there was Ron Patty. Of course, you can’t mention Ron Patty and not mention Carolyn Patty; though often providing piano accompaniment, she was by no means behind the scenes. Known in most circles for his soaring tenor voice, Ron Patty’s primary passion was, perhaps surprisingly for some, sports. But from his impressive athletic feats on the field to his iconic recording sessions on the Christian Brotherhood Hour, whether singing in front of audiences that included the president of the United States and the Queen of England, or simply in front of his own family, the ever-increasing first love of Ron Patty is his Lord. Years into retirement, Ron reveals a picture of his quieter life today—and talks sports, music, and Jesus.

Ron remembers when he and Carolyn were making forty dollars a week working for a local church as ministers of music, youth leaders, and janitors—all at the same time. By then he had already racked up quite a record on both the baseball and football fields, but it would have been hard for him to imagine the fame attached to his name that would only grow in the years to come. In the fall of 1950, Ron had come to Anderson College on athletic scholarships, the only way he assures he could have ever become a Raven. With an ERA of 3.70, and after leading the baseball team in runs-batted-in (RBI) and home runs, he even participated in several international tournaments and captured the attention of the major leagues. On the football field, Ron’s statistics were strikingly similar in scope—2,155 yards thrown and 12 touchdowns from 1951 through 1953, as well as rushing more than 400 yards and achieving 13 touchdowns after that. Marked by 11 passes, and 30 yards per punt on average, his three-year stint as starting quarterback and punter was equally stunning.

With so much athletic ability, Ron could have easily landed a spot on a professional team as a coach, if not also as a player. In fact, it’s what he had in mind from his childhood. God had other plans in mind, as history would demonstrate, not to stifle his soft spot for sports, but to utilize his athletic bent to advance the kingdom and open up an unexpected avenue of ministry.

“My gift is sports; my legacy is music,” Ron recounts. “I never counted myself as a musician, though I certainly married one. My children were all musicians. But, in the sense that they’re musicians, I’m an athlete.” 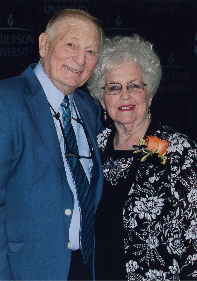 The call to ministry was clear, however, and the way circumstances unfolded in college, it soon appeared that music was the major method.

“I came to Anderson College from Oklahoma, and arrived early because the football team had to begin practice,” Ron explains. “Immediately I started looking for a church home. One Saturday night, I went to East Side Church of God, though I’d never been there before and knew no one. In the sanctuary, I first saw Carolyn, sitting at the piano. They were practicing for a wedding. I was ready to marry her right then.”

Ultimately Ron would join the choir and recalls a moment when Carolyn, from the piano bench, murmured, “That guy can get his part! He can sing!” Of course, Ron’s heart skipped a beat. For sixty-eight years and counting, Carolyn has been making Ron’s heart skip a beat, and vice versa.

The discovery of Ron’s vocal talent had only just begun in that church choir rehearsal. The Anderson College choir met at 4 PM, but football practice already dominated his afternoons. Foregoing football was simply out of the question, but more than one thing began tugging at Ron’s heart to inquire about the possibilities. In light of Ron’s talents on and off the field, the football coach agreed to allow Ron to leave practice early, and the choir director—Robert Nicholson—agreed to allow Ron to arrive late to choir rehearsal. At the audition, Robert Nicholson acknowledged Ron’s high tenor voice and hand-picked him for a quartet-in-the-making. Quartet music had always been Ron’s favorite genre, so Ron knew it would be a good fit. In those days, another influential figure towered above others for Ron, too: Church of God pastor and music minister, Herb Thompson.

Ron’s quartet career soon exploded as the invitation to travel with the infamous Fred Waring and the Pennsylvanians was accepted. For seventy days, Ron’s musical stylings and passions were shaped from a firsthand perspective on Fred Waring leadership of choirs and special music. In this high-profile setting, Ron was privileged, at different times, to sing before President Eisenhower, President George H. W. Bush, and the Queen of England, among other celebrities and notables. He recounts a humorous moment upon his encounter with British royalty.

“We were going to meet the queen and Prince Philip,” he recalls. “But we were wondering what to do—what was an appropriate greeting? Should I hug her? Should I bow? I was relieved when Fred Waring said, ‘This is Ron Patty,” and the queen responded, ‘Well, hello, Ron!’ and promptly stuck out her hand for a handshake!”

Though Fred Waring would have preferred that Ron and the quartet remain on his tour, Ron heeded a strong sense from the Spirit that it was time to get back into local church ministry. Though Ron quips it took him twenty years to earn his Bible and religion degree from Anderson University (Ron and Carolyn were married and opted to follow open doors of ministry before the conclusion of senior year), he was still pursuing a call to ministry. Ultimately his ministry career included not only youth and music ministry, but also a senior pastorate in San Diego, California. And while singing in the CBH Quartet made him known across the Church of God and beyond, God made a way for sports to serve as a method of ministry, too. 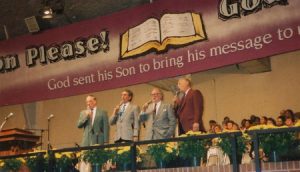 In every local church setting, including a long and successful experience in Arizona, softball proved satisfying and missional. Softball was a big deal in those days, especially in churches, but not limited to churches. And, of course, not everybody who played would have identified as a follower of Jesus. Through softball, and Ron’s witness and willingness to extend invitations to church, whole families are following Christ to this day.

At one time, Ron says he could comfortably sing four octaves—three-and-a-half comfortably. Still, it was the message of the songs that touched his heart. “Blessed Assurance” and “God Will Take Care of You” are his favorite hymns, and cause a tear to well up in his eye when he recites the poignant and personal lyrics. “This is my story, this is my song,” Ron exclaims. “I’m a part of that! Now, more than ever, I feel a part of the story.”

That’s because Ron never stops growing in his walk with his Lord. He never stops seeking, and won’t suppress his longing to learn. No matter his age, Ron realizes there’s something new to discover about God, and about the way of Christ. In recent years, Ron has taken to the task of jotting down his reflections of the stories of Jesus in chapter format. Therapeutic, theologically stimulating, and practically helpful in his own devotion time, this practice—along with cooking in the kitchen alongside Carolyn—has become one of his favorite pastimes in retirement.

If Ron could go back and offer his twenty-one-year-old self a tidbit of wisdom and advice, it would be completely Christ-centered.

“I would say, learn, and try to find some philosopher you know will only lead you into truth, and follow that person,” Ron explains. “Then I would smile, and say, ‘I have found that in Jesus!’ You’ll know God as you learn the teachings of Jesus.… Learn from others, but remember it’s all wrapped up in Jesus. If you get a good slant on him, you’ll want to know yourself and your weaknesses, and you’ll be concerned about other people.” 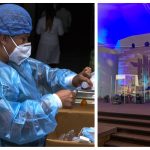 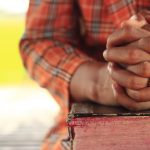